Home Uncategorized Does target-site resistance occur in weeds in barley? 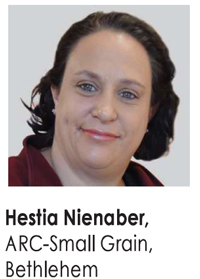 The presence of weeds in any crop has a negative influence on it. The weed competes with the crop for nutrients, water and light and ultimately leads to a reduction in crop yield. At harvesting, contamination may also impact grading quality.

The total annual barley production in South Africa amounts to around 225 000 tons to 250 000 tons, even though there is still a shortfall of about 75 000 tons of malt barley (www.grainsa.co.za). Barley is very sensitive to weed competition and usually early control measures are needed to obtain the optimised yield potential. The presence of uncontrolled herbicide resistant weeds might lead to larger shortfalls in barley production.

It is very common to get cross-resistance to other herbicides of the same herbicide mode of action. Target-site resistance commonly occurs with herbicides from Group A and Group B.

Research results
During September last year, weed samples (broad-leaved and grassweed samples) were collected from barley fields all over South Africa (Photo 1a and Photo 1b). ARC-Small Grain was able to analyse 28 of these samples.

The DNA of four samples was of too low quality to use. Previously identified molecular markers were used for identification of target-site resistance in these weed samples. Although no results were obtained with the ALS markers (target-site resistance to Group B herbicides), other markers are in the process of being tested, as to avoid missing scarce mutations that might occur within these samples.

Summary
Heterozygous target-site resistance to ACCase marker 2078 was recorded in various samples. This may render some Group A herbicides useless in the spraying programmes that are used in barley production throughout South Africa. Therefore, it is necessary to know the resistance status of the weeds in your crop, to be able to apply effective herbicide management strategies and achieve optimum barley yields.

For further information, please contact Hestia Nienaber at 058 307 3420 or deweth@arc.agric.za.

This research was made possible through funding by AB InBev

Thabang - February 24, 2022
0
Herbicides are only as effective as the mindset of the individuals who apply them. One serious shortcoming in agriculture worldwide is the failure to...