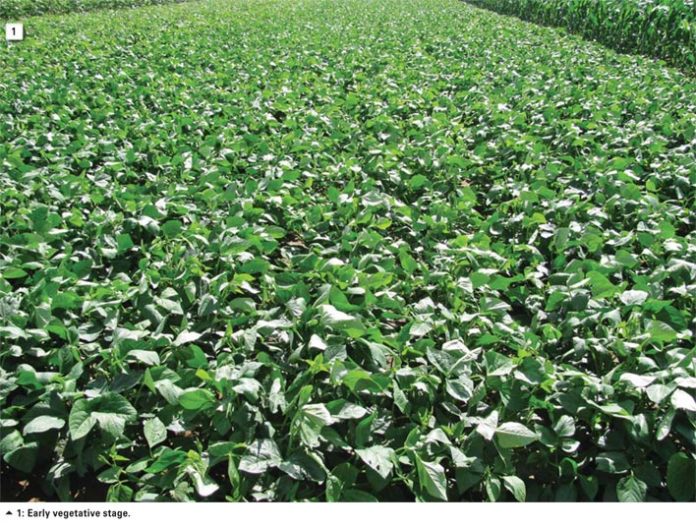 This article is the 22nd of a series of articles highlighting a specific pasture crop species that can play an imperative role in conservation agriculture (CA)-based crop-pasture rotations. Besides improving the physical, chemical, hydrological and biological properties of the soil, such species, including annual or perennial cover crops, can successfully be used as animal feed.

Livestock production systems are in many ways dependent on the utilisation of pasture species, in this case as a pasture ley crop, and can therefore become an integral component of CA-based crop-pasture rotations. It is imperative to identify a plant species fulfilling the requirements of a dual purpose crop, i.e. for livestock fodder and/or soil restoration.

This article focuses on a legume cover crop with pasture crop potential used to improve soil conditions and to provide a high quality forage for ruminants.

Cowpeas are a summer annual legume and a fast grower, reaching heights of 60 cm when grown in favourable conditions. There are many cultivars and they vary greatly in growth habit. Some are short, upright bush types and others are tall and vine-like.

In times of drought a cowpea taproot can grow down to 2,5 m (depending on soil type) to reach moisture deeper in the soil profile. The vining type is preferred for forage or cover crop use, while the bush type is better suited for direct mechanical harvesting.

Although cowpeas will tolerate recurrent waterlogging, they will not grow well if the soil is waterlogged for extended periods. Cowpeas grow best during summer and the suitable temperature for germination is in the order of 8°C and for leaf growth 20°C. The optimum temperature for growth and development is around 30°C.

The time of flowering of photosensitive varieties is dependent on time and location of sowing and may be more than 100 days. Research has also shown that in early flowering varieties, the flowering period can be extended by warm and moist conditions. Cowpeas grow well in heat and is more drought-tolerant than many other crops. It can grow under rainfall ranging from 400 mm to 800 mm per annum. Well-distributed rainfall is important for the growth and
development of cowpeas.

In certain areas of South Africa, the frequency of rain is very high, resulting in serious waterlogging while in other areas it is so unreliable that moisture conservation remains vitally important for crop production.

Cowpea varieties will grow on a wide range of soil types; however the legume shows a preference for sandy soils, which enable better root growth. This adaptation to lighter soils is coupled with drought tolerance through reduced leaf growth, less water loss through stomata, and leaf movement to reduce light and heat load under stress.

This crop is more tolerant to infertile and acid soils than many other crops, requiring a soil pH of 5 to 6. It is also extremely important to remember that even though cowpeas can survive waterlogged conditions, they prosper in well-drained soil and therefore struggle on heavier soils.

The optimum sowing times are October to December. Early-sown crops are less erect, more vegetative and have a lower yield than those sown at the optimum time. It is also imperative that cowpeas are inoculated with a specific nodular bacteria i.e. Bradyrhizobium spp. to ensure effective nodulation for nitrogen fixation, but this is not necessary if cowpeas or other legumes (mung beans, peanuts and stylos) have previously been grown in the same area.

Land preparation prior to sowing is similar to that of other field crops. Alternatively, minimum tillage is recommended and sowing directly into a grass, legume or crop stubble is beneficial. Cowpeas have large vigorously growing seedlings and are therefore better suited to minimum tillage practices. A seeding rate of 20 kg/ha – 30 kg/ha should be used, which is needed to obtain optimal dry matter and grain production yields.

The seed can either be broadcast or drill seeded in 18 cm or 40 cm rows. Pre-planting cultivation is an adequate control measure for hay and green manure crops, as cowpeas are vigorous twining legumes which smother and choke out weeds if the recommended sowing rates are used, resulting in well-established crops.

Since phosphorus is an important nutrient for leguminous crops, South African soils are often phosphorus deficient, and superphosphate applications of 100 kg/ha – 250 kg/ha are recommended while potash should be fertilised at 50 kg/ha – 150 kg/ha prior to sowing.

Utilising cowpeas as hay crop is becoming more common by the day. The perfect time to make hay from cowpeas is at peak flowering stage, which generally occurs 70 to 100 days after sowing.

Most cowpea crops will mature at the same time whether sown early or late. Those crops sown earlier have the opportunity to produce higher hay yields because of a longer growing season. Studies have shown that cowpea hay yields are generally between 2 500 kg/ha – 6 000 kg/ha, depending on the growing and management conditions.

When using cowpeas as a cover/green manure crop, it can be incorporated/rolled at any time when sufficient green material is available, but it is best done at the time of peak flowering when the material is of high quality and will decompose quickly in the soil. 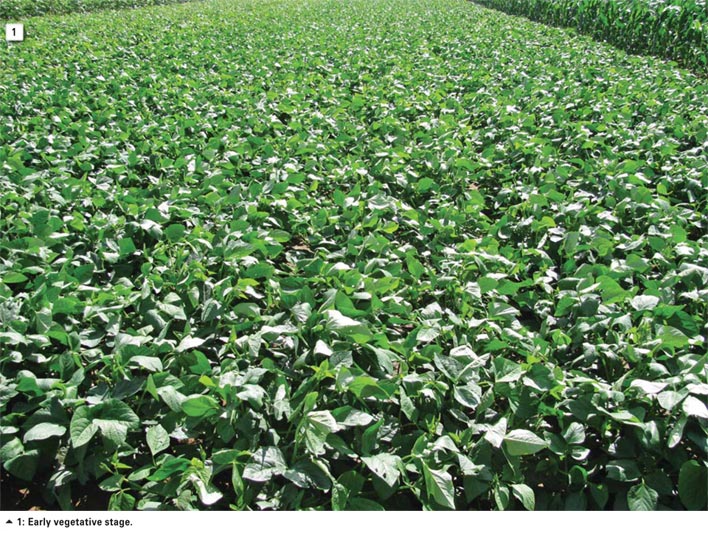 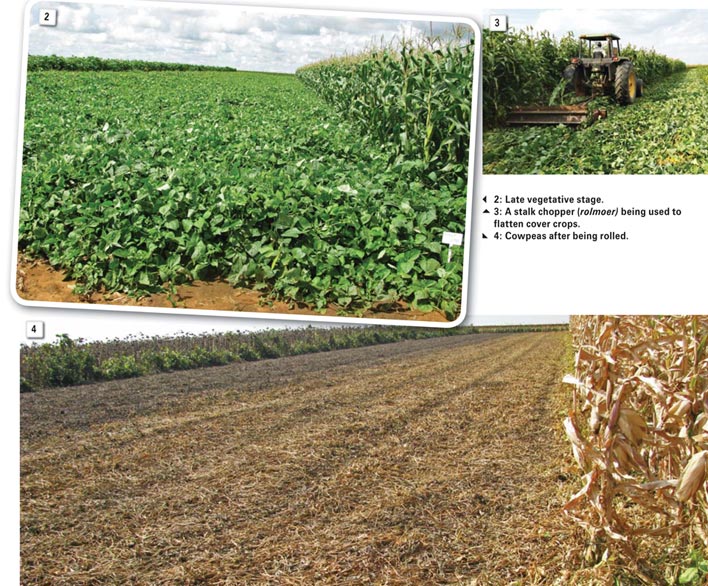 Research regarding the contribution of cowpeas to soil improvement has shown that cowpeas can produce about 4,5 tons of dry matter per hectare, each ton containing approximately 30 kg of nitrogen. The nitrogen content of cowpeas is about 1,5% – 3,5%.

Producers can take advantage of the natural ability of cowpeas and other legumes to fix atmospheric nitrogen. For good legume growth and nitrogen fixation, the soil should have adequate phosphorus, a good balance of micronutrients (iron, sulphur and molybdenum), appropriate pH, and good aeration (no compaction or waterlogging). Cowpeas are sensitive to zinc deficiency. Cowpeas’ contribution to a cropping system when incorporated is approximately 120 kg/ha.

Organic matter provided by legumes is quickly decomposed by soil microorganisms and does not persist for long in the soil. To build up the humus content of the soil, select slowly decomposing, fibrous grasses as green manure, or use grass-legume mixtures. Possible grasses for mixture with cowpeas include sorghum sudangrass hybrids. Long-term incorporation of annual legumes such as cowpeas will increase the soil humus content, but at a slower rate than would grass cover crops (Valenzuela and Smith, 2002).

Studies have shown that diseases such as powdery mildew (during wet winter months and under humid conditions), leaf spot, rust and mosaic virus have been recorded in cowpeas. Control measures are normally not necessary or practicable. Guinea fowl are also known to have a liking for cowpea seedlings once emerged and can be very destructive.

Harvesting cowpeas later in the season will ensure higher forage yields, but will also result in a lower quality. Nevertheless, cowpeas have a higher forage quality than some subtropical annual grasses such as millet and sudan grass. Many studies have shown that cowpeas can have a high crude protein concentration, varying between 19% and 24%, depending on the stage of harvest and the management applied.

Cowpea forage has been successfully fed to beef cattle all over the world and often by small scale producers in Africa. To date, no known reports exist of poor palatability or anti-quality problems. The most appropriate method to preserve the quality of this crop is to make haylage or silage. Cowpea hay tends to be very similar to soybean hay, being very stemmy. This characteristic limits the fast curing of the plant material, taking longer to dry.

The following results were obtained from a trial in the Dundee district (KwaZulu-Natal). The total rainfall during the summer season of 2003/2004 was 473,6 mm – well below the long term average of 745 mm per annum that falls mainly during summer.

Grazing commenced on 5 April 2004 and ended on 1 June 2004, when all the available grazing material was utilised. Mutton Merino ewes (with their lambs), as well as dry sheep, were used to graze the cowpeas during the mentioned period of 57 days. During the grazing period pods were already formed.

The calculated carrying capacity for a two month (60 days) grazing period was 15,1 small stock units (SSU)/ha/60 days. The following assumptions were made in the calculations: One ewe, with an average mass of 65,3 kg, was taken as the equivalent of 1,28 SSU, one lamb (average 19,3 kg) was taken as 0,51 SSU and one dry sheep (average 47 kg) was taken as 1 SSU.

The lambs grew on average 278,9 g/day and they gain on average 15,9 kg/lamb for the grazing period. This is highly acceptable for lambs on this type of dryland pasture. Although in a lactating phase, the ewes also managed to gain weight (38,6 g/day) and that will contribute to their body condition in the next breeding season.

Cowpeas as an annual legume crop, offer many opportunities for CA based cropping systems. This crop makes a significant contribution as a leguminous crop through N fixation. With cowpeas commonly known as a drought tolerant crop, much attention is given to using this crop to produce high quality forage in a drier environment.

Lastly, seeding cowpeas with a subtropical grain crop such as maize can be extremely valuable in the long term for such a crop rotation system.

Thabang - March 30, 2021
0
South Africa’s crop statistics are considered by the United States Department of Agriculture (USDA) to be of excellent quality. This is according to Dr...