The 2018 production season saw a wide range of climatic conditions at the five different sites where the conservation agricultural (CA) crop rotation trials were planted.

Sites at Riversdale and Napky showed low rainfall figures, very similar to those of the 2017 season. Tygerhoek received a little more rain than in 2017, but still lower than the long-term average. The Langgewens and Hopefield sites enjoyed excellent climatic conditions. However, the Langgewens trial sites also experienced unfamiliar strong gusty winds during harvest, which had a devastating effect on crop yields.

Riversdale – Uitkyk
During the 2017 season the site received only 146 mm of rain from plant until the end of September which resulted in the lowest yields since the start of the trial. Although the 2018 season started off dry, late rains helped to improve average yields at the site. The site received roughly 20 mm more rain than in 2017.

The trial was planted between 23 April and 25 April with a double disc seeder from Xfarm. Erratic rainfall events with low total millimetres resulted in a very uneven germination of all crops. This had the biggest effect on the wheat produced in the trial, while the canola and barley reacted well to late rainfall events later in the season.

Early germinating wheat was subjected to bird damage since it ripened much earlier than the rest of the wheat in the different plots. Canola germination varied significantly, but the late rainfall helped the crop to compensate, while barley yielded very well under the circumstances. Table 1 gives a summary of the yield and quality data from the Riversdale site.

Napky – Middeldrif
The Napky area was also very dry. A dry late summer did not help to get an even germination of all the crops planted at the site. A new camp on the farm was planted to compare three planter types and four different crops on the site.

From plant until the end of September, the site received 139 mm of rain. It was decided to rather cut all the plots for hay to deal with the weed challenges at the site. Due to the poor rainfall, the weed control was hampered which led to this decision. Biomass samples were cut from which yield components were determined in order to get an estimated yield potential for barley and wheat at the site.

Tygerhoek Research Farm
In 2018 the rainfall from April to the end of October was the second lowest in the 17 years of the trial, with 2017 being the lowest. If one looks at the average wheat yield over the 17 years, there were six seasons where the average yield was lower than in 2018. That is a possible indication of the long-term improvement of the crop rotation and minimal disturbance of the soil.

The trial site received 147 mm from April to October in 2017 and 189 mm in 2018 during the same timeframe. The whole trial was planted with a single disc Equalizer planter.

Barley yielded on average 700 kg/ha more than in 2017. Two camps yielded less than 3 t/ha and both were in the six-year continuous cropping system. The other two barley camps in the same system yielded 3,85 t/ha. All four of these crops followed wheat in the system, but two had canola before wheat and the other two lupines before wheat. It might be the result of the extra nitrogen in the system from the legumes, but also better weed control.

In 2016 the lupine camps were terminated early due to a low plant count and thus poor competition against the weeds, which was not the case with the canola. Wheat yields were also 500 kg/ha more than in 2017. At Tygerhoek oats are harvested for the breakfast cereal market. In 2017 it had the highest average (3,3 t/ha) of the three cereals produced in the trial.

During 2018 it did not show the same improvement in yield as did the wheat and barley, only realizing a 100 kg/ha increase on average. Canola also showed improvement from 2017 to 2018 with the better rainfall.

Table 2 gives the crop results from the Tygerhoek CA trial 2018. 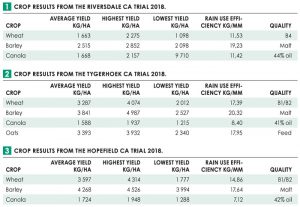 Langgewens Research Farm
The 2018 season at Langgewens was much more favourable than the 2017 season. The trial site received a total of 309 mm of rain from April to the end of September, which was still well below the long-term average for Langgewens. Although there was a short dry spell during July, a cool and wet September set the scene for above average yields (Photo 1). Unfortunately, during the weekend of 19 October to 21 October the area experienced very strong gusty winds, which caused havoc in the wheat and canola crops.

An experiment from 2017 was repeated, where four camps of wheat following medic pasture were split. One half of each camp received only 9 kg/ha of nitrogen at planting and the other half received the same, as well as an additional 30 kg/ha nitrogen as top dressing. In 2017, two camps were similarly managed in terms of nitrogen allocation. In 2017 both these camps showed higher yields in the halves with the lower amount of applied nitrogen. In 2018, three of the four camps showed similar tendencies. In the fourth camp, the half that received a total of 39 kg/ha of nitrogen yielded slightly better.

Barley and oats had better than expected yields and averaged 4,53 t/ha and 2,74 t/ha, respectively. In 2018 a pea and lupine mix was added and when harvested, those plots yielded an average of 1,5 t/ha. All wheat following a legume crop or cover crop received a total of 44 kg/ha of nitrogen for the season, while wheat following all other crops received 64 kg/ha. Wheat from the new trial was also classified as B1, while barley and oats were classified as malt and breakfast grade respectively.

Hopefield – Waterboerskraal
The Hopefield trial is the new addition to the CA research stable, following requests from the industry for a systems trial on sandy soil. The trial was laid out across a camp that was planted with canola in 2017. It includes a six-year rotation system, with wheat, canola, barley, fodder crops and lupine which are planted with two different seeders (a tine and a disc planter).

The same rotation was used as the base for three different tillage practices on the sandy soil. One system is completely no-till, while the other two systems include ripping of the soil.

Rotation of the crops was as follows: Wheat, fodder, canola, wheat, fodder and then lupine. The first fodder year consisted of a grazing mixture (or cover crop mixture) that included rye, black oats, two cultivars of peas, vetch and two cultivars of radish (serving as biological ploughs), since this system will not be ripped at all by mechanical means (Photo 3 and Photo 4).

Rye was planted in the other two systems. All the fodder crops were cut and baled as hay during this season and from next season onwards it will be grazed by sheep. It was decided to plant barley as the second fodder crop in the no-till and the single rip systems. The idea was to have it serve as a possible dual-purpose crop, harvesting it in good years and using it as hay in the poor years.

Barley, rye and triticale were therefore harvested in 2018. Results were well above expectation, as can be seen in Table 3. The triticale yielded an average of 4,1 t/ha, while the cereal rye yielded 2,8 t/ha. The site received 242 mm rain from April to the end of October. 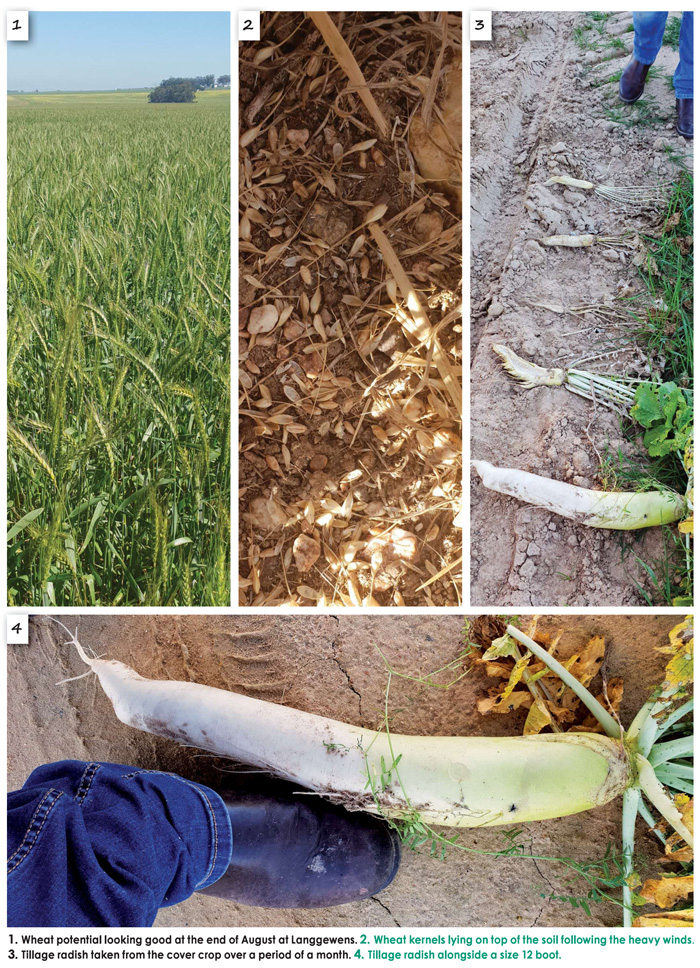 Conclusion
Although the results varied across the province, we are very thankful that the CA system trials are doing well. We would also like to thank the Winter Cereal Trust that supports all of the trials, as well as the Protein Research Foundation that contributes to the Riversdale trial.

This research effort will not be possible without the hard work and long hours in wind, rain and sunshine of our research technicians and support staff. Lastly, we would like to thank our producer collaborators at Riversdale, Napky and Hopefield.