The demand for reliable sources of protein makes soybeans an important oilseed crop in South Africa. As a popular source of protein and oil, it is being cultivated in more regions than ever before. Its popularity is driven mainly by the demand for protein feed (in this case soybean oilcake) from the animal feed industry, but soybeans are also increasingly valued as a rotational crop with maize.

SA Graan/Grain spoke to several seed companies to find out what they have in store for the new season.

Pannar
‘Farming for the future means building your farming operation on a long-term vision and objectives that will keep you in business for generations,’ says Pannar’s marketing communications manager, Christin Hunter. ‘The versatile Pannar soybean package has unparalleled stability at different yield potential levels and over different production regions.’

What is new this season?
New varieties
Pannar has two new soybean cultivars launching in the 2020/2021 season, namely PAN 1555R and PAN 1479R. PAN 1555R is a robust, medium-season cultivar that is well suited to moderate-potential lands and makes an excellent stablemate for the market-leading PAN 1521R. PAN 1521R is the go-to cultivar for higher-potential lands. PAN 1479R is an early-maturity cultivar (maturity group 4,6), that will provide scope for producers to widen their harvest window and spread flowering dates to manage the risk of Sclerotinia.

New technology
Looking somewhat deeper into the product pipeline, there are some very exciting product developments that have been made possible by the introduction of the end-point royalty system. Corteva Agriscience™ is busy with the deregulation of a Conkesta Enlist E3™ soybean – a new trait stack which includes two genes for resistance to insects and three genes for tolerance to herbicides. The insect resistance is conditioned by two Bt genes that target lepidopteran pests. The herbicide tolerance portion of this trait package offers 2.4D tolerance, glyphosate tolerance and glufosinate tolerance, providing unprecedented weed-control flexibility. Corteva plans to launch this innovative soybean trait platform in combination with the herbicide Enlist, a new choline formulation of 2.4D, which avoids the issues of volatility and drift associated with the traditional formulations. This is subject to approval by South African regulatory authorities. 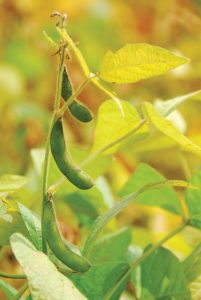 Pioneer
Leveraging on a local and global germplasm library of the highest-yielding genetics, Pioneer has one of the industry’s most extensive localised soybean product-testing programmes to deliver leading yield-potential soybeans customised for producers. ‘Our testing programme enables us to produce high yield-potential products with the agronomic traits growers need – faster than ever before,’ explains Barbra Sehlule Muzata, Pioneer’s communications and brand leader for Africa and the Middle East.

‘The reason for the products’ success is the company’s investment in research to deliver better results and by working with producers, sharing information and testing products on the ground. This gives us a deeper understanding of how products will perform on the farm. In addition, trials are conducted in a variety of locations locally to evaluate new hybrids across a range of environments – backed by localised and international breeding programmess.’

What is new this season?
Pioneer currently have the following soybean varieties, namely P 48T48 R in the short-grower market (maturity group 4) and P 61T38 R, P 64T39 R and P 71T74 R in the long-grower market (maturity group 6) that will give producers choices in soybean products for the coming planting season, creating value for them and end-users.

RA 4918 R and RA 4820 R are two new short-season varieties with a maturity of 4,9 and 4,8. They are widely adapted to the cooler and moderate eastern regions and can also be used on irrigation after wheat.

These two varieties have high yield potential on narrow rows (<76 cm) and can also tolerate moderate drought conditions. They normally flower early in January and are ready for harvest by the end of March, beginning of April. One big advantage of these early maturity varieties is that they tend not to get Sclerotinia on dryland conditions, since they escape the disease because of their maturity.

What makes RA 4918 R unique is that it is a short-season variety with high tolerance against all three root-knot nematode species (M. incognita, M. javanica and M. enterolobii).

RA 660 R is a new exiting long-season variety with a maturity of 6,0. This variety is adapted to the warm irrigation and the moderate and cooler eastern regions. It can be grown on a row width of <92 cm and has a very high yield potential. RA 660 R also has very good root-knot nematode tolerance against all three species (M. incognita, M. javanica and M. enterolobii) that can currently be tested for.

Agricol and GDM Seeds
Agricol has been working closely together with GDM Seeds for more than seven years and both companies are very passionate about soybeans. SA Graan/Grain contacted Francois Hamman, soybean crop and sales manager at Agricol and development supervisor at GDM Seeds, Joner Dalcin. ‘As partners we are constantly thinking about the future and tirelessly testing new lines and evaluating these lines,’ says Francois.

What is new this season?
New varieties
Next season there will be at least two new varieties of maturity group 4,7 and 6,8 with a higher yield potential, complementing current varieties like DM 5953 RSF and DM 6.8 iRR. ‘Soon we will recommend the best Donmario varieties for producers to ensure that they plant the best genetics and harvest the best yields.’

New technology
The new technology INTACTA from Bayer has been tested under regulated trials in South Africa to ensure that it will be available soon. Like any new technology, government regulations require that it must be tested before launching. It takes time, but we are very excited to launch the first varieties as well as the first experience with producers. However, for now, we can say that the varieties look amazing in terms of yield and new technology. There will also be a maturity range from 4,8 until 7,0 suitable for any conditions in South Africa. The next two years will be very promising and we are going to work tirelessly to bring a new level of yield for the producers of South Africa.