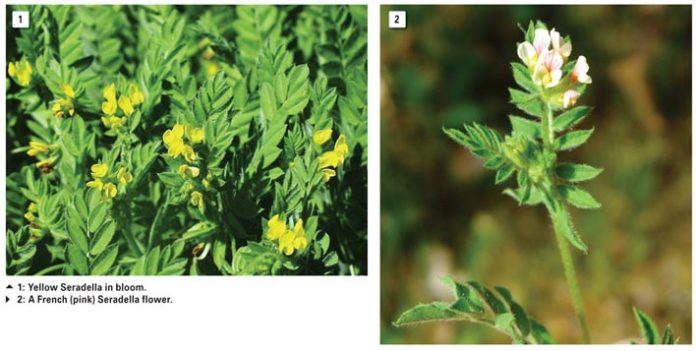 This article is the 14th in a series of articles highlighting a specific pasture crop species that can play an imperative role in CA-based crop-pasture rotations. Besides improving the physical, chemical, hydrological and biological properties of the soil, the species under discussion can also successfully be used as animal feed.

This article focuses on an annual legume pasture crop commonly used in the winter season as a green manure crop to improve soil conditions and to provide cover in the winter months of a summer rainfall region. This annual legume crop could possibly succeed a perennial grass pasture prior to planting a grain crop the next season.

With the rising cost of fertilisers and the objective of sustained soil fertility and soil health improvement, this green manuring option can provide an opportunity.

Seradella is a winter growing, annual legume that has a semi-erect to erect growth nature, but can also form stolons/creepers. This species has a deep root system and can form creepers as long as 1 m. It is indigenous to north Western Europe and the Mediterranean. It has the ability to grow on soils that are poor and not suitable for other forage crops. 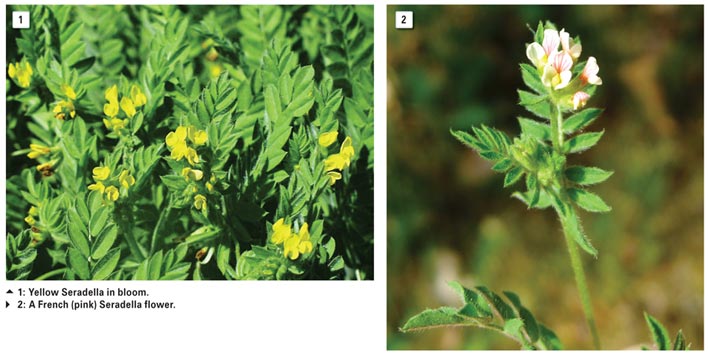 Seradella’s growing season stretches from autumn to spring, and it can grow at altitudes as high as 1 500 m above sea level with a rainfall of between 300 mm to 700 mm rain per annum. Pink Seradella is not frost tolerant and is moderately drought-tolerant. As mentioned, dry conditions are overcome by deep root systems that are able to access deeper sources of soil water. It is known that yellow Seradella can tolerate deep, sandy, acidic soils. This species is also very susceptible to waterlogged conditions and not suited to alkaline soils. This illustrates the potential of this species, especially the earlier flowering varieties, to grow in lower winter rainfall areas, as low as 350 mm per annum.

Supplemental irrigation can play an important role in increased production. The hard seeded and deep root system characteristics of the species, facilitates the establishment and persistence of this species in soils with low fertility.

Good soil preparation is imperative for the successful establishment of Seradella. It is recommended that the seedbed be as fine, firm and weed free as possible to avoid unnecessary plant competition.

Seradella can be planted with a nurse crop, such as oats, for either hay or silage purposes. It is then advisable to use 10 kg/ha – 20 kg/ha of seed (depending on climatic and soil conditions) in mixture with the oats seed. It is important that the seed be inoculated with the correct strain of Rhizobium bacteria.

Seradella has a small seed and it is important that the seed is planted shallow (10 mm – 15 mm) and rolled firmly to facilitate good establishment. It is advised that seed rather be drilled into the soil rather than broadcast, as this will ensure the best seed soil contact required
for optimal germination.

The seed is known to have a very low germination potential, however, dehulled seed seems to have a much better germination percentage. The peak growth period is generally in spring, followed by a drying off of plants in summer.

Soil nutrient requirements for legumes are normally high levels of potassium, calcium and particularly higher levels of phosphate as well as micro nutrients such as copper, zinc and molybdenum. It is advisable to raise the soil nutrient statuses to 30 mg/kg P and 120 mg/kg K.

These soil nutrient levels are often not economically justifiable if soils have low levels occur, which justifies the use of Seradella as it is adapted to low fertility. It is not common to find insect pests, root or foliar diseases on Seradella plants; however, international reports have recorded mites and worms occasionally feeding on the plant.

Since Seradella is a legume, its purpose can be either to provide a protein rich fodder or rather to be incorporated into the soil as a green manure. If grazed, the recommendation is to do it infrequently and with a moderate grazing pressure. Very good hay can be made from Seradella as long as it is not dried out too much, resulting in significant leaf loss.

The use of Seradella as a living mulch was investigated in small scale farming systems in the Eastern Cape and KwaZulu-Natal. With frequent rainy events in autumn, good yield culminated after interseeding Seradella and Seradella/oats mixtures into maize during late February. The living roots in the soil had a positive impact on soil health, supplying food to micro-organisms.

The efficiency of this system needs to be calculated over two or even three years of practice. The suppression of weeds and insect pest’s pressure may favour such interventions.

Considering the green manuring benefits of Seradella, it is advisable that this crop be planted on soil prior to winter, and not necessarily fertilised for maximum production, since this can potentially have an impact on the soil moisture content build-up over the rainy season.

This species can be planted to additionally provide a soil cover to limit soil moisture evaporation and wind erosion. Finally, once the crop has grown to maturity and fixed nitrogen, it can be incorporated into the soil prior to the following summer’s grain crop.

The most significant management challenge with Seradella is to ensure that the seed is well inoculated and not planted too deep. This is sufficient motivation for a nurse crop to be planted along with Seradella. Another management challenge is the grazing management of the species to sustain a good dense stand. If the plant is overgrazed the stand will become sparse and unproductive resulting in a higher incidence of unwanted species (weeds).

The most effective method of utilisation is hay or silage making. With regards to hay making, leaf loss can become a management challenge if the harvested plant material is dried for too long.

As a hay and silage crop, dry matter yields are important and can vary from anything between 4 tons/ha – 10 tons/ha, all depending on the inherent soil fertility, moisture and type, in conjunction with climatic conditions.

Seradella can have a crude protein content as high as 20% – 25% with a very high digestibility, which declines as the plant matures in addition to a lower leaf:stem ratio. This very palatable species can even provide a metabolisable energy (ME) value of 10 – 11,5 MJ/kg.

Seradella is not a well-known legume crop in South Africa, however it has many benefits that can support and play an integral role in conservation agriculture. If managed correctly, it can be a persistent and vigorous grower with good palatability and nutritive value.

It also has a good tolerance for poor soils, but should rather be seen for its potential as an interim crop (green manure) between a long-term pasture ley crop and the next annual grain crop. Its drought-tolerance and adaptation to poor growing conditions makes it a suitable candidate as a green manure crop.

Fusarium head blight incidence is on the rise, globally