In this ever more challenging era of modern agriculture, grain producers are under immense pressure to produce more food. The increasing world population needs to be fed through the most efficient, climate-smart agriculture production systems ever imagined. In order to assist the producer to cope with this herculean expectation, it is important that the entire wheat industry invests in smart research and development initiatives that are relevant and can deliver outputs.

Ultimately, wheat producers require high-yielding cultivars that can be produced with the current (or even less) input costs to improve profitability. The future can be brighter if these high-yielding cultivars contain acceptable disease resistance levels that would not require chemical application to protect the yield potential and reduce the risks for the producer.

The 34 high-yielding lines were selected from a series of different international nurseries. The first 24 lines were selected purely on field performance and the presence of molecular markers associated with targeted yield components. The additional ten entries (25 to 34) were selected for other yield component-related traits. All these entries underwent rust evaluations between June and August in three different greenhouse experiments at ARC-Small Grain in Bethlehem. Each entry was screened separately and independently at seedling stage for resistance to the three cereal rusts, namely stripe (yellow) rust, leaf (brown) rust and stem (black) rust. Five seeds of each line were planted out into small seedling pots. Each line was replicated twice and infected with an inoculum cocktail, containing three or four of the most prevalent South African rust races per rust type. Host response interpretation for each infection type (IT) based on internationally accepted standards were used (Table 1).

For easier interpretation of numerical results, the 0 to 4 infection types were then converted into the following categories of host responses, which are also used in the production guidelines for cultivar recommendation. 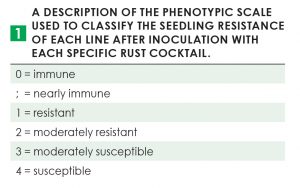 Results
A relatively moderate to good level of resistance against stripe and leaf rust, with lower levels of stem rust resistance were found in the lines evaluated. As these lines originated from international nurseries, the occurrence of rust resistance (R) to South African rust races was somewhat unexpected. Only one entry (entry 6) was completely susceptible to races of all three rust types (Table 2), while many entries showed a mixture of MS or S across the three rusts. In contrast, entry 23 (with an average yield of 6,6 t/ha) was highly resistant to all three rusts. Five entries were resistant to two of the three rusts. Entries 2 and 11 were resistant to both stripe and leaf rust, entry 12 was resistant to leaf and stem rust and entries 15 and 24 had a resistance response to stripe and stem rust, but were susceptible to leaf rust. 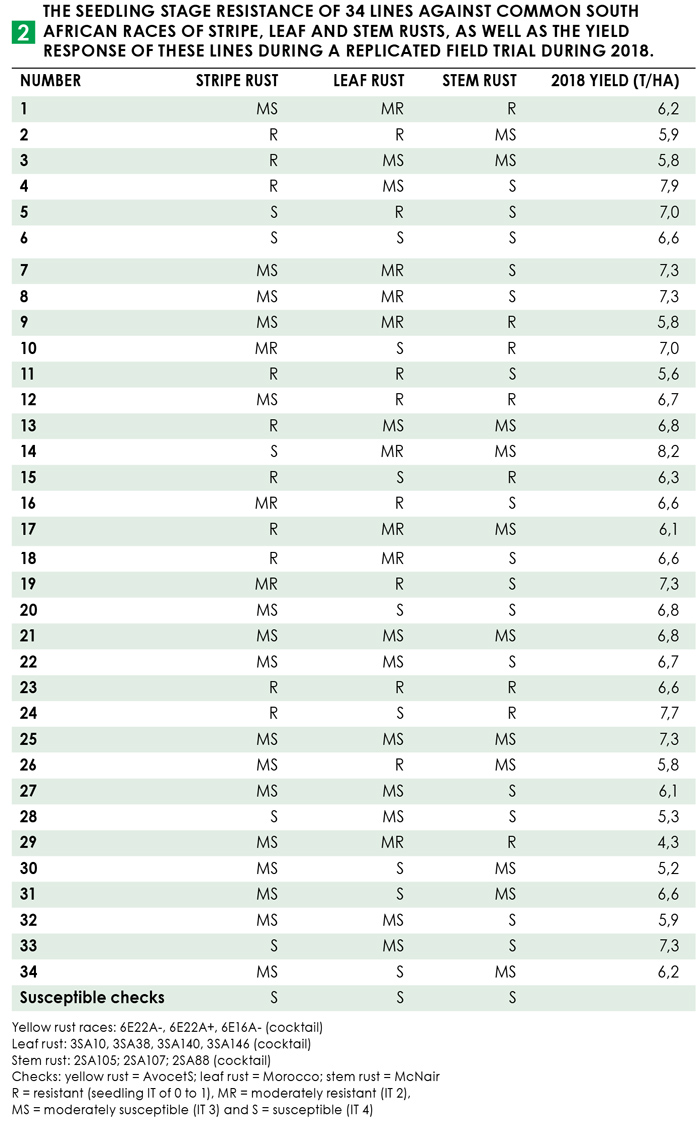 Eight of the entries (entries 4, 5, 7, 8, 10, 14, 19 and 24) that were evaluated and had moderate to good levels of resistance against at least one rust pathotype, yielded above 7,0 t/ha. However, entries 25 and 33, which also yielded over 7,0 t/ha, had significantly less resistance against the three rusts. The overall resistance to stem rust was relatively low in the panel of 34 lines, with only eight lines showing resistance. This is not all that surprising with the high number of virulent Ug99 race variants present in South
Africa.

Differences observed
Interesting differences were observed between the rust resistance levels in the first 24 selections compared to the additional ten selections (Table 2). This distinction needs to be made, as entries 25 to 34 were all chosen for other yield component traits and were selected from international yield improvement nurseries. These entries had overall lower rust resistance levels and were not the best for yield performance either.

Originating from more advanced elite breeding material and nurseries from the International Maize and Wheat Improvement Centre (CIMMYT) and the International Centre for Agricultural Research in the Dry Areas (ICARDA), the first 24 selections also targeted other agronomically important traits apart from yield. These entries all had superior rust resistance levels and overall better yield performance. This exemplifies the excellent job the various wheat improvement breeding programmes at CIMMYT and ICARDA are doing. The results further validate the importance of evaluating a wider range of international nurseries, other than nurseries targeting just genetic yield potential. The nursery sources of these top lines with yield potential, good quality and good to moderate levels of rust resistance are unexpected and can lay the foundation for future cultivar development by all breeding companies.

These lines can be directly used as crossing parents by breeders to potentially improve the yields, while maintaining acceptable bread-making quality. They also give access to a good rust resistance gene pool base to develop superior South African wheat cultivars. Information on the adult plant response of these entries will lead to a better understanding of their resistance, and therefore needs to be considered in future studies.

Currently, these 34 lines are being evaluated at other test localities in the three major production regions of South Africa.

A sincere thank you to Ms Joyce Mebalo and Ms Bomikazi Gqola for the technical assistance with the greenhouse experiments, rust scoring and data capturing. The authors would also like to thank the ARC and the Winter Cereal Trust for the financial support. This project forms part of the aligned IWYP project (AP06).