Ruminant livestock are important to mankind since most of the world’s vegetation biomass is rich in fibre.

Only ruminants can convert this high fibre vegetation into high quality protein sources such as meat and milk for human consumption. Livestock agriculture is the world’s largest user of land resources and southern Africa is no different to the rest of the world. In South Africa, approximately 84% of the surface area is available for farming, but only 13% of this area is arable. The greater part of the country (71%) is only suitable for extensive livestock farming and primary beef cattle and small stock farming are largely extensive in South Africa.

The continuing deterioration of the natural vegetation is at present one of the most burning agricultural issues in southern Africa which impacts negatively on the competitiveness and efficiency of the livestock sector. It is thus imperative that role-players within the livestock industry (research institutions, government departments at national and provincial level, primary producers as well as the related secondary industries) must recognise that the natural resource is vital to sustain livestock production. 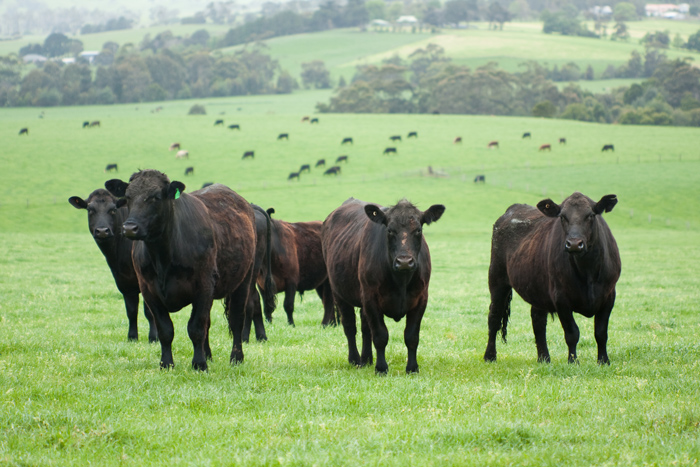 Rangeland and herd management
Many of the important management decisions a livestock producer make, relate to the management of the forage resources of the land unit. Both biological and economic efficiency are influenced by a producer’s ability to match animal type and nutrient needs to forage availability and quality on a year-round basis. Animal type as defined primarily through species and breed differences, has a large influence on the nutritional requirements of animals. Therefore, the type of animal can have an impact on the level of performance of the animal and the economic returns of a grazing system on different rangeland types/forages.

Producer decisions, such as timing of parturition to match the lactation curve to the forage production curve or choosing to graze steers rather than cow-calf pairs, should be considered in the choice of management decisions related to forage and grazing systems.

A further aim of rangeland and herd management is to ensure the maximum quantity and quality forage/mm rainfall, which will contribute to optimum livestock production without degrading the ecosystem. In reality, however, rangelands have deteriorated considerably. The challenge ahead is to reverse the situation and to ensure that they improve through sound rangeland and herd management systems.

The challenge is not to change the vegetation to suit a specific animal type or production system, but to use the animal type and production systems as determined by the environment. Given the large variation in rainfall and the consequent impact on grazing capacity, the challenge is to exploit this variability and develop sustainable livestock production systems within the different ecological regions. If the environment (especially rainfall) is analysed, some current livestock systems within specific regions can be questioned. This especially relates to commercial livestock farming in certain areas which is not according to recommendations and the requirements of the vegetation.

The objective should be to match fodder demand with fodder supply. Whereas the general principle of fodder production planning applies to all pastoral livestock enterprises, each has distinctive characteristics which merit special attention. These specific requirements are a function of the system being adopted within each enterprise. For the system to operate effectively, a particular set of conditions needs to prevail irrespective of where in the country the system is used.

Alternative fodder crops
Given the current state and limited potential of some vegetation resources over much of South Africa, and the low productivity of the national livestock herd, alternative fodder crops should be established as a priority. It is important to appreciate that rangeland and cultivated pastures can play complementary roles in providing quality fodder to livestock. It can also significantly increase forage production. There is undoubtedly considerable and, as yet, untapped potential for cultivated pastures in many parts of the country.

A strategy to develop this potential would make it possible to increase forage production and improve productivity and efficiency of livestock to such levels that South Africa can become self-sufficient in livestock products and also compete in the international arena.

Cultivars and technology for the new season