Charcoal stalk rot is caused by the fungus Macrophomina phaseolina and is favoured by soil temperatures of 30°C to 42°C and low soil moisture. Initial symptoms in maize can be observed after flowering with the abnormal drying of upper leaf tissues, stalk lodging and premature death.

When plants approach maturity, the lower stalk nodes (usually limited to the first five nodes) show a typical charcoal, grey-black discolouration. When the stalk is cut open, numerous black specks (microsclerotia) are visible in the shredded vascular bundles and on the inside of the stalk (see Photo 1).

The charcoal rot pathogen (fungus) has a broad host range that includes soybean, sunflower, sorghum, maize, tobacco and a range of vegetable crops – making crop rotation ineffective as a management tool. The most effective and environmentally friendly management option remains the use of cultivars with resistance against charcoal rot.

Resistance screening
Since no information was available regarding the resistance of commercial cultivars against charcoal stalk rot, 30 commercial maize cultivars were screened for resistance in a project funded by the Maize Trust in 2018/2019.

To conduct disease ratings of the stalks from the individual cultivars, the stalks were split open and the lesion size captured according to a disease severity scale (Shekhar & Kumar, 2012). Cultivar disease scores in this study ranged from 1 to 5 where a score of 1 indicates a healthy stalk or slightly discoloured stalk at the site of inoculation. A score of 2, 3 or 4 means that up to 50%, 51% – 75% and 76% – 100%, respectively, of the inoculated internode is discoloured. A score of 5 means that 100% of the inoculated internode is discoloured with less than 50% of the adjacent internode.

Results
The data was analysed by Mrs Nicolene Cochrane (ARC-Biometry Services), using a split-plot Anova with cultivars as main treatments and treatments (inoculated and control) as sub-plots. From the Anova analyses, cultivar and treatment as main factors had a highly significant effect on charcoal rot infection. 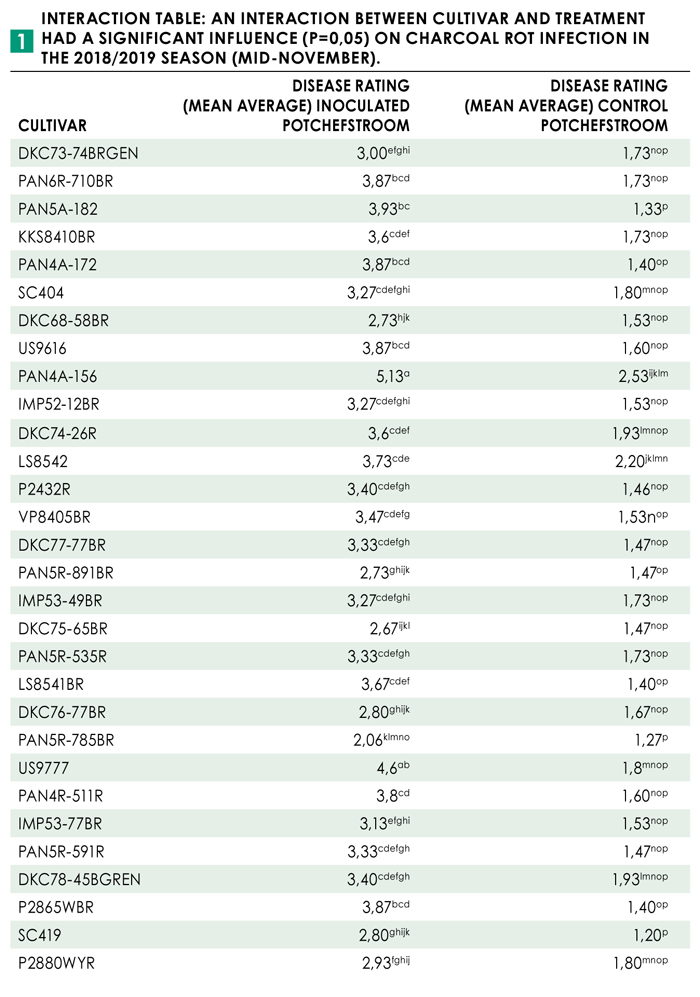