No-tillage adoption led to the intensification of cropping systems across the Argentine Pampas. In conjunction with newly introduced agronomic practices, no-tillage resulted in more stable crop yields and significantly lower levels of soil erosion and degradation.

The next major challenge was to restore fertility levels and the natural functioning of the soils, as several decades of conventional tillage and soybean monoculture depleted soils of soil organic matter and basic nutrients (Graph 1a to Graph 1c).

Favourable market prices and effective weed control strategies under no-tillage supported a significant increase in land area under soybean production since the late 1990s (Graph 2), while the land area used for maize and sunflower production remained stable. Land used for cattle farming was converted into crop fields in order to accommodate the increase in soybean production. Currently, modern technology and innovative management strategies are incorporated in an effort to restore and maintain improved soil functioning. 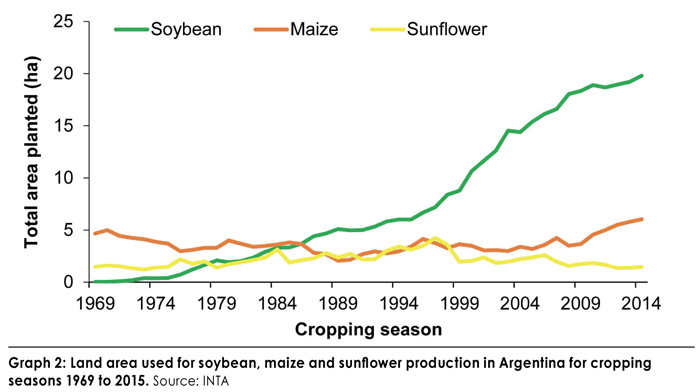 A greater emphasis on soil health
Despite achieving profitable yields, soybean monoculture under no-tillage had damaging effects on soil health and crop yields over the long term. For example, the high nutrient demand of soybean and sub-optimal crop management have led to a decrease in soil fertility. In addition, regardless of following no-tillage for the past 20 years, soil organic matter content of soils in the Argentine Pampas have not increased to optimal levels.

This is attributed to several factors directly related to soybean monoculture. Due to the lack of diversity (above- and below-ground) and low levels of crop residues present following the soybean crop, soil microbial activity were not stimulated naturally. This inhibited the ecosystems services provided by soil microbes such as nutrient cycling and mineralisation, limiting soil organic matter build-up. Moreover, the unavailability of crop residues resulted in limited livestock integration into the grain production systems.

For example, long-term urea application leads to an increase in crop residues (resultant of possible increased crop growth). However, this practice inherently leads to higher soil acidity, poor soil organic matter build-up and a dysfunctional soil food web, despite including no-tillage and crop rotation in the cropping system.

Under long-term no-tillage, restoring vital soil nutrients will be difficult if all the CA practices are not implemented successfully. For example, phosphorus (P) forms strong bonds with soil particles and is easily locked up in the soil matrix becoming unavailable for crop uptake. As a result, the uptake of applied P by plant roots is severely reduced.

One option to improve P-uptake is to apply starter P at planting in the furrow. However, most Argentine producers resort to broadcast application in order to cover large areas in a short period of time. By following this approach, the presence of a soil cover is
critical.

Without an adequate soil cover, the topsoil dries out rapidly further promoting inefficient P-uptake. As an average across the Argentine Pampas, less than 20 ppm soil P are plant available while a high fraction of P is locked up in the soil matrix. Researchers, field technicians and producers have been tasked to develop novel approaches to unlock this pool of P, such as reviving the ever-present soil microbial communities.

Through the emphasis on soil health, driven by soil biology, all other factors contributing towards overall optimal soil ecosystems functioning are being restored, including that of the physical component (see Table 1).

Currently, crop diversification is emphasised as an essential principle of conservation agriculture across the Argentine Pampas, with cover crops as a key element of it. By establishing cover crops following or substituting a cash crop, producers are able to incorporate both livestock and crop diversification into the cropping systems, while ensuring a positive impact on soil health and an excellent soil cover/mulch retention, especially compared to monoculture soybean.

Planter technology and precision agriculture
Due to ever increasing production costs, Argentine producers are integrating new technologies to increase the efficiency of external inputs. Planter technology in Argentina is locally driven with exceptional focus on the improvement of crop establishment in local soil and climate conditions. Turbo coulter row cleaners were specifically designed for Argentine soils managed under no-tillage (Photo 1a).

The turbo coulter row cleaners have a ‘micro-tillage’ effect on the soil in the planting furrow, providing advantages such as:

The double-disc opener (Photo 1b and Photo 2) provides stable seed depth placement when high volumes of crop residues are present. Seed depth placement is the first step to ensure an optimal grain yield at the end of the growing season. 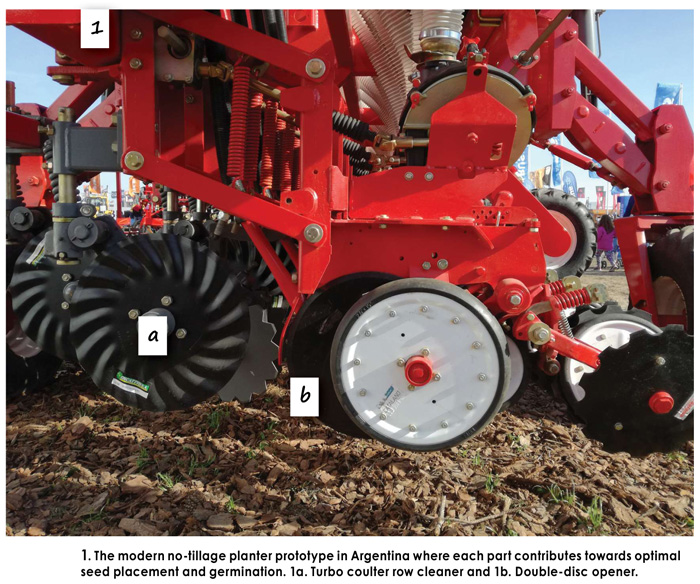 Across Argentina, approximately 70% of the total grain planting, spraying and harvesting is performed by professional contractors. Producers monitor all crop management activities and evaluate the service provided. This improves the efficiency of these practices altogether, as strong competition exists among contractors.

Since 2007, the majority of harvesters have been equipped with monitors determining grain quality while harvesting. It provides information on grain moisture, protein and oil content. This is of great benefit for producers, with continuous data logging providing an insight on how the crops reacted to fertiliser and localised soil conditions within a field.

For example, when barley or wheat is produced for beer, grain protein content can be logged across the field during harvesting. A database is then created for future reference, where management practices (e.g. fertiliser application or plant population) can be adapted to correct deficiencies in order to improve both the quality and the marketability of the product.

Conclusion
In Argentina there is now a great awareness for the need to overcome the challenges encountered in their no-tillage cropping systems to avoid depleted, unproductive soils and crop losses in the long term. During the transition process from conventional to no-tillage practices, a major focus was primarily placed on soil management. However, a more integrated approach is now emphasised, that includes soil fertility, crop diversification, crop residue management (quality and quantity) and livestock integration. All of these factors have a direct impact on the health and performance of the soils under no-tillage management.

Arithmus - December 17, 2016
0
December 2016 What type of yield is expected of you this year? The Christmas message for this year takes me back to the pictures of so...