The mass rearing of insect pests was and still continues to be an important part of agricultural research.

‘Reared insects’ refers to insects that are bred and maintained in the laboratory in contrast to those collected directly from a field. Insects reared on artificial diets are produced on synthetic diets and not on available host crops in the field. The artificial diet should not have an effect on the insects’ growth and development that differs much from its natural cycle (Graph 1).

All insects reared in the laboratory were originally collected from a field and then screened to prevent viruses or contaminants from being brought into the insectary. A rearing colony is then established by using large numbers of healthy insects. Insects collected from fields have been successfully reared on an artificial diet at the ARC-Grain Crops for consecutive years. 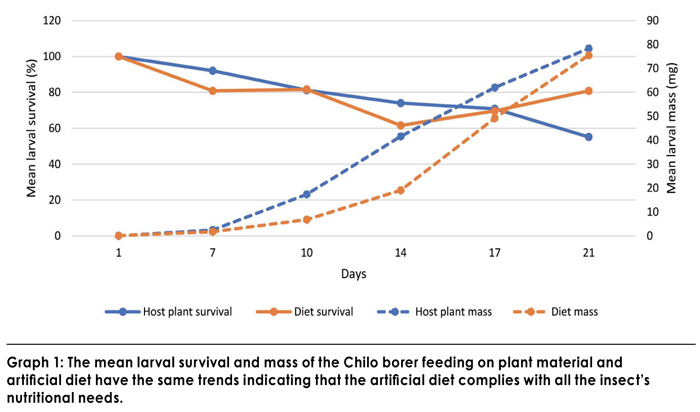 The most suitable artificial diet for each species is selected based on the characteristics of the relevant insect species. The mouthparts of species reared will, for instance, determine the texture, moisture and ingredients needed for the most optimal diet to produce the highest quality insect (Photo 3).

Rearing insect colonies on artificial diets in a laboratory is advantageous, because it reduces the labour, time, space and in many cases, the costs, associated with rearing these insects on their preferred host plants. Furthermore, it is not always possible to rear insects on their natural host because of seasonal availability of the host and the costs thereof. 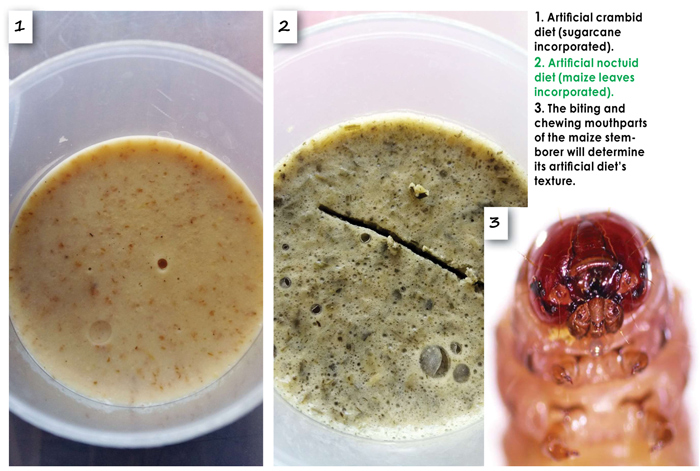 Uses of mass reared insects
Mass reared insects have many uses. Not only are they used by commercial companies that test insecticides, pheromones and biological control agents, but they are also used to screen for resistance to chemicals and genetically modified (GM) crops like Bt maize.

Laboratory-reared insects form an important biological part of integrated pest management. The rearing of beneficial insects is a growing global industry that supplies insects for industrial and research purposes. Such insects include parasitoids and predators that are able to suppress pest insect numbers in the field.

The sterile insect technique is a mass rearing method in which the insects are reared in great numbers and the males are then sterilised through gamma radiation. Sterile males are released in very high numbers, in some cases weekly, in the targeted areas to mate with the wild females.

Eggs produced by the female insects are then infertile which will lead to a rapid decline in wild population numbers. In this way reared insects are used to control or even eradicate insect pests.

Producers are welcome to contact ARC-Grain Crops with any inquiries regarding insect pest infestations in their crop fields at StrydomE@arc.agric.za.