There are three rust diseases of wheat, namely stem rust (Puccinia graminis), leaf rust (Puccinia tritici) and stripe rust (Puccinia striiformis), with stem rust being the most devastating. It is one of the most important diseases affecting several cereal crops, including wheat, barley, triticale, durum wheat and certain grass species.

All aerial parts of the plants can be infected, thereby disturbing water and nutrient transport, reducing root growth, and causing lodging and stem breakage. Stem rust survives from one season to the next on living plant material, usually on ‘volunteer’ plants. Spores from these volunteer plants infect the new wheat crop during the following season (Photo 1).

Severe epidemics typically occur when there has been a substantial carry-over of stem rust from the previous season on volunteer plants, when producers have planted susceptible wheat cultivars, and when warm, humid conditions occur. Such conditions favour the rust fungus to infect, grow and sporulate rapidly.

Various control measures are used to manage stem rust, including the growing of resistant cultivars and the use of fungicides. Effective genetic control of stem rust requires regular monitoring of the population of rust races, collection and characterisation of sources of resistance as well as resistance breeding.

Chemical control of stem rust is not desirable due to the cost involved, potential environmental pollution (it is estimated that less than 0,1% of a sprayed pesticide reaches the target pest) and resistance to fungicides by the rusts. There are, therefore, strict regulations governing the use of chemical control on wheat, as well as political and public pressure to reduce the use of agrochemicals. 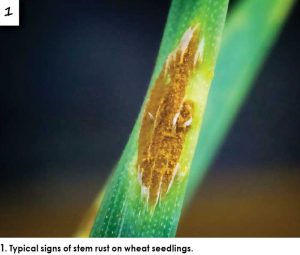 The term ‘biological control’ is defined as ‘the use of living organisms to suppress the population of a specific pest organism, making it less abundant or less damaging than it would otherwise be’ (Eilenberg et al., 2001).

Using microorganisms or their chemical metabolites has become an established component of pest and disease control globally on crops ranging from timber to fruit and vegetables, as well as cereals. Biocontrol products are perceived as being environmentally friendly, and it is unlikely that resistant pathogens will develop against biological control agents because they have complex modes of action.

Information on currently registered biological pesticides and fertilisers in South Africa can be accessed at http://www.biologicalcrophealth.co.za/suppliers. However, no biocontrol products have yet been developed for the suppression of wheat stem rust in South Africa.

With this in mind, ARC-Small Grain, in collaboration with the University of KwaZulu-Natal, initiated a project to source and develop biocontrol agents for the control of wheat stem rust. The project is being funded by the National Research Foundation.

In this project, beneficial microorganisms are being isolated from internal tissues and aerial surfaces of wheat plants. Such organisms are referred to as endophytes and epiphytes, respectively, and are known to live symbiotically inside or on plants without causing any harm to them. In these relationships, the endophyte acquires nutrition and shelter from the host plant, and in exchange, the microbes increase host resistance, enhance tolerance to drought stress, and may improve the host’s competitive ability. Endophytic microbes are being developed as commercial products for their ability to control pests and diseases in host plants, ideally with a seed application, or a single foliar application.

During the 2017 and 2018 wheat seasons, stem and leaf samples were collected from 79 different localities in the Western Cape, an area where stem rust is commonly encountered. A total of 969 fungi and bacteria were isolated from inside rust-infected or clean stems, and from leaves. These microbes are now being tested for their ability to infect wheat plants, and for their ability to control stem rust – two distinct properties.

Several commercial bioproducts are also being screened against stem rust under glasshouse conditions, including curative and preventative treatments. These are: Bio-Tricho and Bio-Impilo based on a fungus Trichoderma harzianum; Eco-77 based on Trichoderma atroviride strain B77; Bio-Build™ which uses N-acetyl salicylic acid and natural extracts to enhance host resistance; Bio-Protector containing ascorbic acid and natural plant extracts as well as Kanguard 940 containing plant organic acids. A copper fungicide (copper oxychloride) has been included as a control treatment.

Silicon fertilisers
A second approach is the use of silicon fertilisers to enhance host resistance. There is a large body of research showing that when plants take up silicon as a mineral, their resistance to pests, diseases and environmental stress is enhanced substantially. The challenge is to find a silicon fertiliser that releases silicon in a form that plants can take up, and which is affordable for a field crop such as wheat.

The use of silicon fertilisation can be integrated with breeding for resistance and the application of biologicals for the control of stem rust.

Field experiments will be conducted during the 2019/2020 season in the Western Cape, Free State and KwaZulu-Natal. The rust control treatments will test both the commercial bioproducts and silicon fertilisers. The bioproducts will be applied at booting stage, followed by a spray inoculation with rust spores (Photo 2). 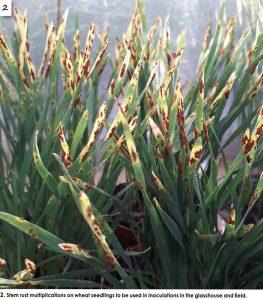 The trial will be evaluated for disease severity, grain yield and hectolitre mass. Data will be statistically analysed to determine the most effective treatments and the results will be published in the popular literature.

This project is expected to identify effective biocontrol agents and silicon treatments that could be used in the integrated management of stem rust of wheat, once the best biologicals have been registered for application on wheat. Both commercial and small-scale farmer communities stand to benefit from the safer biologically-based control interventions being developed with this project.

For any additional information, please contact Cathy de Villiers at 058 307 3452 or devilliersc@arc.agric.za.