Towards the end of 2018, the germplasm development research team based at ARC-Small Grain in Bethlehem, tried something fresh and new to revitalise the relationship with its vitally important industry stakeholders. A selected number of annual, national pre-breeding trials planted on the ARC-Small Grain farm were showcased.

Invitations were sent out via email directly to specific stakeholders and decision makers within the South African wheat industry. On Thursday, 8 November, a group of ten invitees (including some of ARC-Small Grain’s collaborators, stakeholders, funders, trustees and producer representatives) attended the first germplasm development (pre-breeding) open day.

Reason for the event
This special event was envisaged to truly display the excellent germplasm development research that is being conducted at ARC-Small Grain for the greater benefit of the entire South African wheat industry. The developed germplasm trials were specifically targeted as this critical research output is often misunderstood or undervalued and is not easily explained in a written report or a few pictures.

Seeing is truly believing. How else can the true value of developed germplasm, the field trial size, the passion with which the research staff talk about their material, the time-consuming nature of their trade, complete commitment to making a difference and the pure complex enormity that specific trait improvement trials pose, be shown to relevant stakeholders?

The material developed in these projects is meant to directly benefit the producers and the industry in the long run. This engagement was seen by the team as a critically important step towards bringing all of its industry stakeholders together to better understand the potential research gaps, to clear up any misperceptions and to relevantly address the research needs of both the producer and the industry partners that are served. 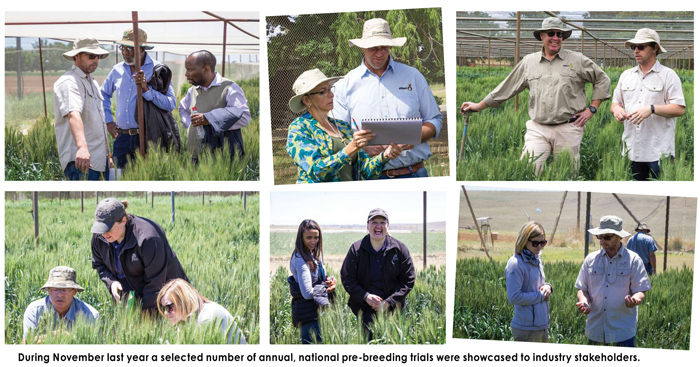 Each responsible scientist gave a short contextual talk regarding the material planted and the project’s status. The participants thoroughly enjoyed this new interactive opportunity to engage with the respective project leaders and pre-breeders directly during walk-throughs of the material. 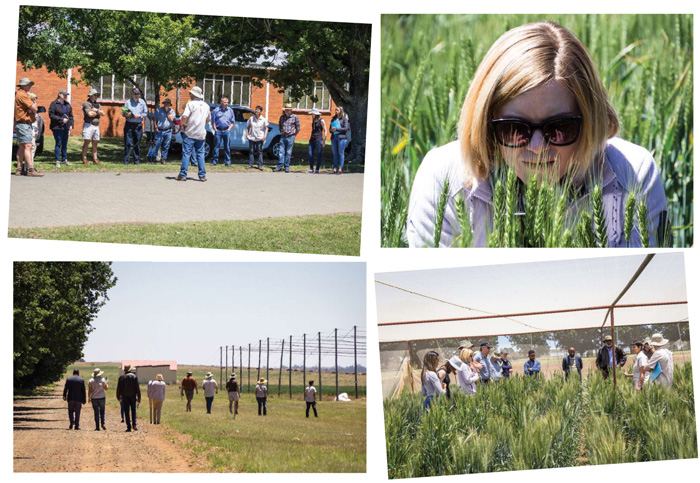 The direct feedback and live commentary during the walk-throughs were truly empowering. The team then hosted the attendees for a simple networking lunch that led to further fruitful engagements. The verbal compliments and written praise after the event were extremely positive, with multiple requests to fix a date well in advance for 2019, as this would allow more invitees to keep the date open for the next event.

Mr Ishmael Tshiame, the Winter Cereal Trust (WCT) administrator, took it on himself to personally recommend that the attendance of this event be made a compulsory engagement for all WCT trustees. This will allow for attendance by more key members. Since this first open day in 2018 was so well received and successful, the germplasm development group has decided to make it an annual event. A fixed date (14 November) has already been set for this year.

Commercial breeding companies’ visits
Additionally, the different breeders from Sensako, Pannar and the ARC breeding programmes were hosted individually over a two-week period in November. Each relevant breeding company and its breeders were requested to reply to a list of suggested dates for their visits to walk through all field trials with the project leaders and pre-breeders.

The different breeding companies made several selections by tagging individual heads or single rows in the field from the different pre-breeding projects and international nurseries during their respective visits. Ultimately, this is what any pre-breeder wants.

Germplasm developed should be used or taken up actively in commercial breeding programmes to assist with the release of improved wheat cultivars. The seed of most of these selections was handed over to the relevant breeders during February this year.

Vision of this unique germplasm development team
This buy-in by the commercial breeders to have the confidence and trust to make selections, is a significant achievement. One of the visions mutually held by the ARC-Small Grain pre-breeding team is to become nationally and internationally recommended as the one-stop germplasm development shop, where one will find excellent research specialists for any germplasm screening or developmental service required.

The germplasm development team has a unifying motto: ‘We aim to change the world one seed at a time.’

As the largest national pre-breeding group working on wheat improvement, the team strives to constantly align research needs in a sustainable but innovative manner, while remaining relevant. This fulfils the public funding obligations of the WCT funded research projects and establishes ARC-Small Grain as the national leader in wheat pre-breeding.