Root rot and crown rot infections are the least understood diseases of maize, mostly due to the fact that these rots are a result of a disease complex which is continually changing. Changes in the complex are usually due to numerous factors such as: Pathogen precursors in the complex, soil environmental conditions, maize plant resistance and the growth stage of the maize plants.

Changes in the complex may also be due to various agronomic practices such as tillage systems, crop rotation, soil nutrient status as well as the use of various herbicides. Various fungal pathogens are involved in this disease complex, which can each differ in their ability to result in disease on their own or collectively with other pathogenic fungi.

Rots caused by these fungal pathogens ultimately affect maize plants adversely by causing poor germination, poor seedling vigour, plant stand reduction, plant stunting, plant lodging and eventually reduced yield. Yield loss as a result of root and crown rot is often very difficult to quantify due to the lack of a healthy control, but a yield decline of 1,81 t/ha for each 25% increase in maize root rot severity has been reported.

Crop rotation has been shown to be a viable control measure against soil-borne diseases (that cause root and crown rot) as it may reduce pathogen carry-over to plant residues and soil. Rotation has over the years been seen as one of the practices that can improve crop yields with limited production inputs. It produces higher yields by replenishing soil nutrients and disrupting disease and pest cycles, thus contributing towards conservation and sustainability of natural resources.

Literature suggests that a legume-based cropping system may improve and stabilise the yield of maize in a rotation system as well as improve the ability and capacity of roots in such a system to absorb water and nutrients efficiently. The effect of crop rotation on soil-borne fungi is, however, complex. Fungi appear to be affected differently by various rotation systems whilst research indicates that no single crop rotation system favours all fungi.

Previously, a real-time polymerase chain reaction (PCR) method was developed by the ARC-Grain Crops as a rapid and accurate method to quantify the most important fungi (Graph 1) in the complex causing root and crown rot. This method was used in the current study to assess the maize root rot fungal pathogen complex during the maize growing season under different cropping systems. 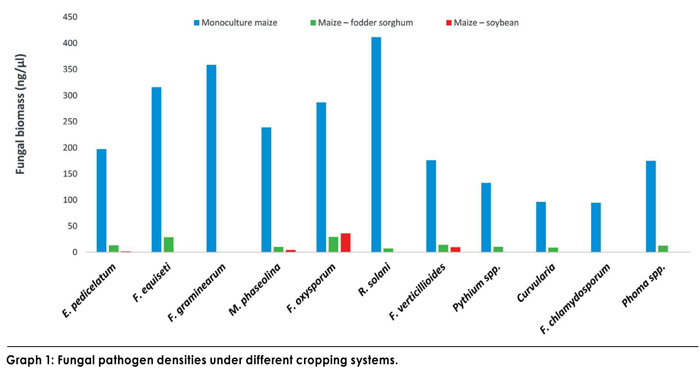 That is: Monoculture maize (Photo 1a); maize in rotation with fodder sorghum and maize in rotation with soybeans (Photo 1b). As part of a larger study that is currently being conducted on crop rotations, samples were collected from a field trial in the Wesselsbron area during mid-April in the 2016/2017 as well as the 2017/2018 seasons. 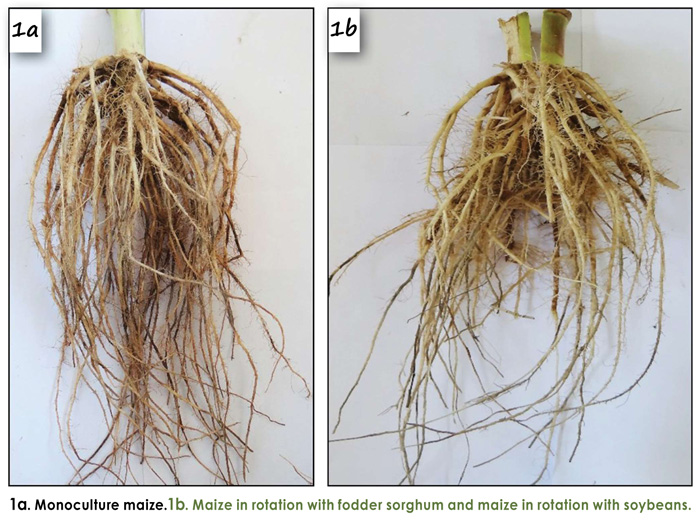 From the results obtained, it was evident that the amount of primary inoculum of the root rot-causing fungi differed between the different crop rotation systems (Graph 1). Graph 1 represents the subsequent fungal biomass as quantified using real-time PCR per microliter of sample.

Although the findings discussed here only represent two seasons’ data, a number of important aspects were emphasised by this study. One may speculate that monoculture maize in rotation may potentially result in a lower yield compared to the other two crop rotation systems.

The study is still under investigation and the effects of genotype and environment are also being investigated. Our results reiterate the importance of crop rotation as management strategy against maize root and crown rots. An improved understanding of maize root and crown disease complexes will help formulate management strategies, striving to optimise maize production in South Africa and limit economic losses.

Thabang - June 12, 2020
0
John Deere has been a global leader in agricultural technology and innovation since its start in 1837. As much as we value personal interaction...