‘My mentor said, “Let’s go do it!” – not you go do it, but let us do it. How powerful when someone says, “Let’s!”’ These words spoken by the successful American entrepreneur and motivational speaker, Jim Rohn, sum up how Mr Sinelizwi Fakade (28), Grain SA provincial co-ordinator in the Eastern Cape, approaches mentorship.

Knowledge is key
Although he is not a farmer, he has studied agriculture extensively – first obtaining a diploma in agriculture at the Cedara College of Agriculture in KwaZulu-Natal and then successfully completing his BTech in Agricultural Management. Further studies included a BA honours degree and a master’s degree in 2017 where he specialised in food security and policy. His studies focused on rural development, extension resource management and production. As a mentor he has been privileged to be able to integrate his studies practically. He has also started a PhD which he hopes to complete by 2020.

Being raised in a rural community ignited his passion for farming. He also believes that changing lives and uplifting people living in rural areas are part of his DNA. Therefore, Grain SA’s mentorship programme suits him like a glove – to mentor, train and uplift the agricultural skills of small-scale farmers by exposing them to improved production practices, leading to better results. Ultimately this means more money in their pockets and an improved way of life.

As provincial co-ordinator Sinelizwi’s goal is to commercialise rural areas on a per hectare basis. Success is not measured by the size of the land being cultivated, but by the sustainable and profitable production of crops. This is being accomplished by ensuring that the information conveyed is understood by all, and put into practice. Improved production practices where farmers are exposed to quality inputs, soil analysis and better land preparation are making an impact in the Eastern Cape.

Replacing poverty with opportunity
‘We have a huge problem in the country with the greater part of the population going to bed at night without having eaten a substantial meal for the day.’ Sinelizwi is therefore enthusiastic about a programme that replaces a life of poverty with one where goals are attainable through training and where farmers can become independent. To him independence is crucial and development programmes must change lives.

He has witnessed farmers who used to produce hardly enough for their own community that are now producing maize of commercial quality. ‘That is transformation – not just changing for the sake of change, but empowering an individual,’ Sinelizwi says and adds, ‘The Grain SA Farmer Development Programme is succeeding and our goal is changing lives, equipping smallholder farmers and ensuring that farmers are left independent with a commercial future.’

It is not only the lives of the farmers that are changed, but the lives of all those involved in this programme. ‘To see the smile on the face of someone who never thought they would ever harvest 100 bags of maize, is one of the most rewarding moments I have experienced,’ he shares the impact that the programme has had on his own life.

Eastern Cape paving the way
With the Eastern Cape having a database with more than 3 500 registered farmers already forming part of the programme, it is quite a task to ensure that the necessary knowledge is conveyed to all. In 2015/2016 only 448 farmers were part of the programme. According to Sinelizwi the growth is a direct result of the positive outcomes and improved yield achieved by the mentees.

Theoretical knowledge is communicated at study groups, but the practical visits are where the opportunity for real change transpires. As mentor, he used to visit between four and ten groups (comprising 40 members each) per week for two-hour sessions at a time. He viewed these visits as holistic – where theoretical information was conveyed on the one side and thereafter thoroughly practiced – ensuring that farmers understand exactly what has been discussed.

Farmers should be made aware of all the value chain processes taking place to ensure that they become part and parcel of the farming industry. Although it depends on the level of the farmer, the three key areas Sinelizwi has identified are production, management and marketing. 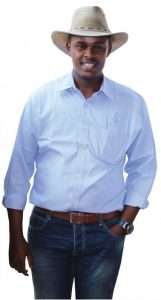 Currently his hands are strengthened by 14 junior mentors who have recently graduated. They visit the farmers on a weekly or monthly basis to ensure that the goals that have been set, are being achieved – a winning formula.

This programme is receiving such good reviews in the Eastern Cape that farmers are queuing to get involved. ‘These success stories are helping to unlock the commercial potential of rural land usage in the province,’ he says about the 7 665 ha of arable land that has already been successfully converted for commercial grain production.

Farmer of the Year: Celebrating learning, development and growth – meet...