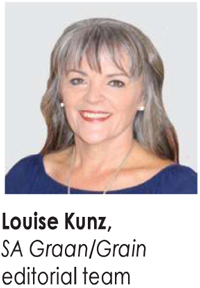 In a blog published on 26 May 2018 on https://www.quora.com/No-one-wants-to-become-a-farmer-Why, the question was asked: Why does no-one want to become a farmer? One of the responses came from a former agricultural student who said that being a farmer required you to be physically active in the sun, rain and cold and that a farmer could never leave the farm if there was a crop growing. He added that it was a career of uncertainty as producers did not know ahead of time if they would make a profit or a loss.

With this in mind, why would a young man with a degree in industrial psychology from the University of Johannesburg leave a successful career with a fixed income to become a farmer? For Mr Jeremia Makhosini Mathebula (39), the 2018 Grain SA/Absa/John Deere Financial New Era Commercial Farmer of the Year, the answer lies in passion.

While working as an industrial psychologist at Mondi (Piet Retief), administering the human relations aspects of the company, he became intrigued by the process of growing trees. Raised by a subsistence farmer in the Iswepe area near Piet Retief on the Ingwempisi estate farm, he used to help his father plant maize on their small piece of land.

The process of planting a seed, seeing it sprout and grow into food made a big impact on him. He told his colleagues that he always had a keen interest in agriculture and dreamed of one day owning his own farming operation. His employer encouraged this interest by getting him involved in the tree-planting process and maintenance where he also became aware of the importance of soil health.

One step at a time
After ten years at Mondi he decided to make his dream a reality and in 2009 he started his own farming operation with a herd of twelve cattle. Although he is passionate about crop production, he first focused on mastering his livestock enterprise. Mr Tito Vorster, a tree and cattle farmer in the Piet Retief area, provided the necessary guidance and became a role-model to Jeremia. Tito suggested that Jeremia should, right at the beginning of his farming career, learn the basics of farming before venturing into grain production. This advice has contributed to his success as a Simbra cattle farmer and he now manages a breeding herd of more than 400 cows.

Once Tito saw that Jeremia had mastered livestock farming, he introduced him to the team at TWK who specialised in crop production. ‘They provided me with a mentor, examined the soil and guided me to begin my journey as a crop farmer,’ Jeremia shares.

As his dreams became too big for the original 40 ha, TWK offered continued mentorship and financing to expand his farming operation. He expanded to 100 ha of arable land, and within a year he had increased to 250 ha.

Jer-Zac farming operation currently uses 1 100 ha of the 1 400 ha on Klipplaat in the Amersfoort district for grazing and 300 ha for crop production. He also rents 300 ha near Morgenzon where he has planted soybeans this season as part of a crop rotation system. He currently uses 20% of the arable land to plant soybeans and the rest for maize, but 20% of the maize is used as supplementary feed for the cattle.

Near his hometown, Iswepe, where his father, Shorty (71) still cultivates his own 1 ha of maize, Jeremia owns a further 100 ha of land where he plants trees.

Over the past four years he has shown a 75% increase in his maize yield per hectare and has also become a proud member of Grain SA’s 1 500 Ton Club. Showing growth every year for the past nine years, indicates that this young farmer is disciplined and
committed.

‘For me to convert to grain production was not a difficult process as I learned about tending maize from my father.’ The experience he gained at Mondi planting trees, has also been valuable. ‘Planting trees follows the same principles as planting maize. Soil sampling tells you what trees you can plant, whereas with maize the soil sample shows you which cultivar is best suited for your soil.’

Jeremia believes that it pays to use a good cultivar as he hasn’t experienced any of the diseases confronting producers in the district. ‘Even though I had some hail damage in the Morgenzon area, I haven’t had problems with Sclerotinia. Even the fall armyworm passed by my crop, but I did apply pesticide as a control measure when I heard there was an outbreak.’

In 2014 he became a member of Grain SA after discovering the wealth of information being shared at the study groups. He attended study groups regularly to increase his knowledge of maize production. Mr Jurie Mentz, Grain SA development co-ordinator, has played a major role in his growth as a farmer.

‘Jurie is tremendous and incredibly knowledgeable. He took me through the whole crop production process. If you need to know something about crop production, he can teach you,’ he says about another one of the mentors and role-models in his successful career. He also uses Grain SA’s website and magazines to gather information about new trends in maize production. 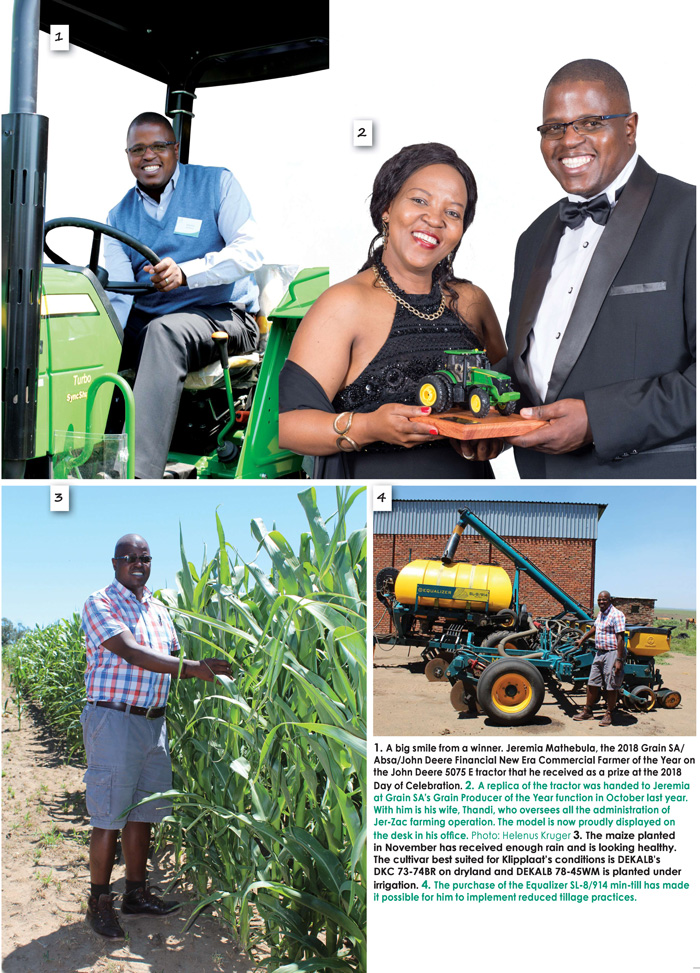 A hands-on farmer adapting to the times
Improving soil health in a farming operation is vital to Jeremia. ‘When I began with crop production, the soil here was poor. TWK analysed it and the soil was brought into balance systematically. Jurie also took soil samples and returned with the results to help me address the imbalances. Soil cannot be adjusted overnight – it is a long process, but well worth it if you look at the difference in yield.’

He mentions that one needs ‘tons of lime’ to get soil to the correct balance. Yearly lime applications of 2 t/ha are done on his farm and soil samples are taken every three years to ensure that the soil’s maximum potential is reached.

‘Soil correction is such a vital part of planting. If you don’t do it, you may as well not plant – don’t waste your money, just keep it in the bank,’ he adds. The results on Klipplaat prove that this is true with an increase from 3,5 t/ha up to 8 t/ha on dryland and 10 t/ha under irrigation.

‘Farming is challenging, especially if there is a drought. No matter what happens, you still have to service your loan and pay what needs to be paid.’ With a 22 m truck and his own harvester, a venture saw the light to help enhance his business. He offers a package deal to producers in the area during the planting season. ‘TWK clients use me for harvesting and transporting crops, but I also assist producers with the transportation of lime, fertiliser and urea to their farms.’

He has taken the first step to implement minimum tillage as a further measure to get the most out of the soil. To save time and money he is slowly incorporating precision agricultural practices, like using GPS for planting. ‘When it comes to planting, you need to work with speed as you only get a certain period to plant. The GPS helps a lot, especially when planting at night. It works with precision – I know when I have set it, I plant 42 000 to 43 000 kernels per hectare. Saving time means saving money,’ says Jeremia who manages the planting himself.

When it comes to the maintenance of equipment, TWK is his service provider and only a phone call away. They tend to all the mechanisation on the farm. This family man admits that without the support of his beautiful wife, Thandi, who handles the administrative side of things, the farming operation would not have been as well organised as it is.

About leadership, dreams and responsibilities
He has nothing but praise for Grain SA’s Farmer Development Programme. ‘It is exceptionally well championed. They assist up and coming farmers to do things in the correct way. The mentorship programme teaches farmers to manage their land. People with experience help you implement the correct agricultural practices.’

He is part of an association of farmers in the Amersfoort area who get together on a regular basis to discuss agricultural issues, as well as chairperson of a Proactive Land Acquisition Strategy (PLAS) study group. Jeremia has also become involved in assisting schools in rural communities. With assistance from TWK, computers and school shoes were donated to schools in the surrounding area.

His message to beginner and emerging farmers is that you should only consider farming if you are passionate about it. ‘If you do not love what you do, you will jump ship before you become successful. Work hard, have the right attitude and don’t be negative. To make money you have to be prepared for the long, difficult journey.’

The best advice he has ever received is to stay focused. ‘Before you make a decision, make sure you have done good research so that you won’t regret it. Consult others to make informed decisions and learn from the mistakes of others.’ 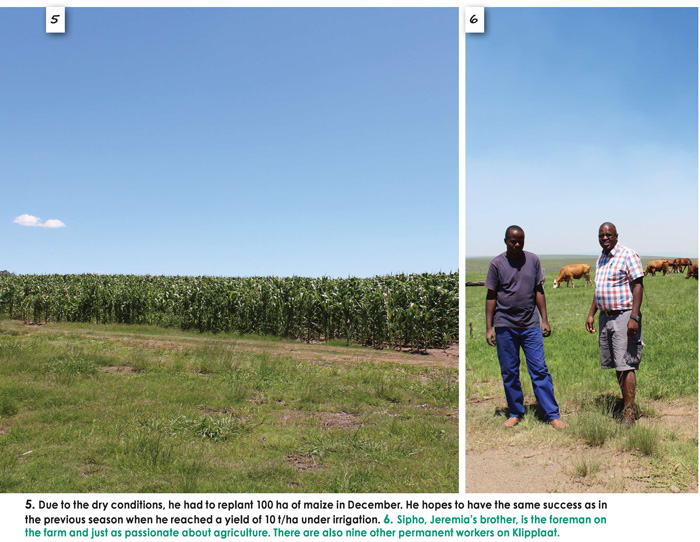 What are his dreams for the future? ‘I would like to become a fully-fledged commercial producer – I don’t think of anything else than agriculture. When I grow too old to farm, my children must take over the operation.’ Within the next five years he would like to expand his arable land from 600 ha to 1 000 ha and increase his livestock to 1 000 cows.

The American singer-songwriter, Bob Dylan, said that someone was successful if he got up in the morning and went to bed at night and in between did what he wanted to do. If this is true, then this New Era Commercial Farmer of the Year is most definitely a success story.