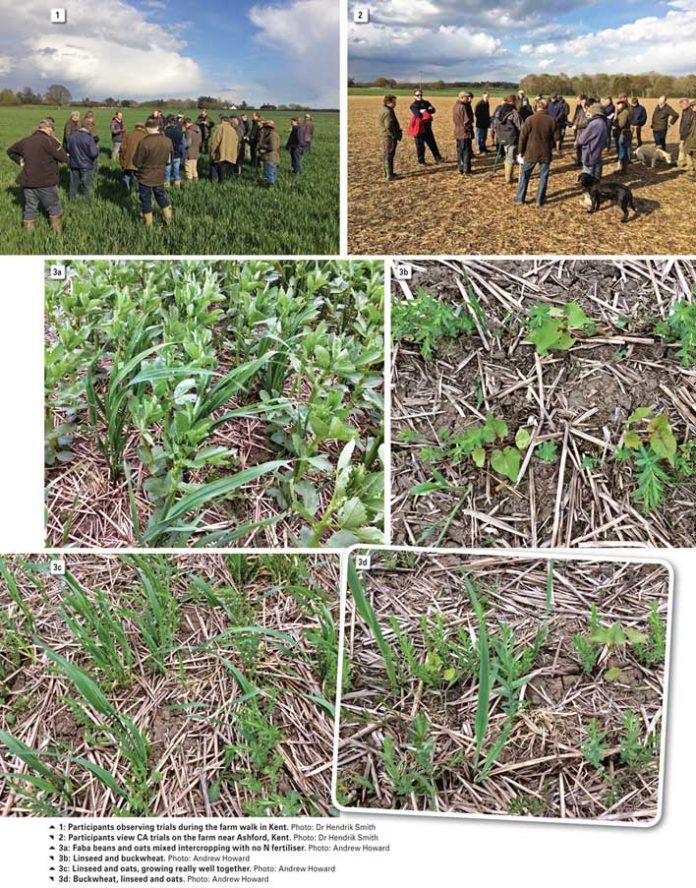 — Conservation agriculture tour to the United Kingdom and Germany

Compared to other world regions conservation agriculture (CA) development in Europe has been particularly slow, such as for example in the United Kingdom (UK) and Germany, with an adoption rate of just above 1%. This is despite the serious environmental problems they have, such as land degradation.

According to Kassam (2011), ‘the root cause of UK’s agricultural land degradation and decreasing productivity – as seen in terms of loss of soil health – is their low soil-carbon farming paradigm of inten – sive tillage which disrupts and debilitates many important soilmediated ecosystem functions – (this system) is no longer fit to meet the agri cultural and rural resource management needs and demands of the 21st century.’

There are a number of reasons for this slow adoption in Europe, some of which are the moderate climate, which does not cause too many catastrophes urging for action, agricultural policies in the UK and European Union (EU) including direct payments to producers and subsidies for certain commodities, which take the pressure off the producers for extreme cost savings and discourage the adoption of diversified crop rotations.

However, the situation has begun to change in recent years, not only through more favourable policies towards CA, but through individual countries taking their own initiative to introduce and promote CA. Increased awareness of producers, politicians and society as a whole of the benefits of CA is leading to gradual changes in the overall approach to soil conservation (Basch et al., 2008).

Two issues stand out: Firstly, in all the successful initiatives, such as in Finland, the CA adoption process was driven by producers, and secondly, there still exists a wide gap between producers and the agricultural research and extension policies and programmes operating in their countries or areas.

There has been little or no promotion of CA in the UK from government side (Andrew Howard, Ashford, Kent – personal communication); it has been primarily producer-led. In the UK the main reason producers are more interested in CA is due to black-grass having become such a serious weed problem. Minimal disturbance at planting, a switch to spring cropping and more diverse cropping are seen as key tools for black-grass control.

First-hand experiences in the UK

From 26 April to 11 May I had the privilege to visit the UK and Germany to share experiences about the promotion of CA in South Africa. I was invited to visit the UK after two Nuffield scholars, Mr Andrew Howard from Kent in England and Mr Gordon Whiteford from Scotland, visited South Africa in January.

I assisted them to visit two CA producers, namely Mr Joseph Swanepoel from Atlanta north of Brits and Mr Jan Grey near Ermelo. The producers from UK were pleasantly surprised and thought that they would gain from something similar (referring to the CA programme Grain SA has established with the support of The Maize and Winter Cereal Trusts) to speed-up CA adoption among their own grain producers.

On 27 April I arrived in the UK and later that same day presented an overview on natural resources and agriculture in South Africa, plus Grain SA’s producer innovation approach promoting CA to producers involved in Biodiversity, Agriculture, Soil, Environment (BASE-UK) at Howard’s farm Oaklands, which is near the town Ashford, Kent.

Producer groups like BASE-UK have been active in the last number of years to promote more sustainable farming practices, such as CA. The presentation followed after a farm walk, which allowed the 50 mostly producer participants to observe and discuss the various CA trials Howard has on his farm (see Photo 1 and Photo 2). The dominant soils on the farm are of a fine loamy to fine silty type with a mean annual rainfall of 750 mm. 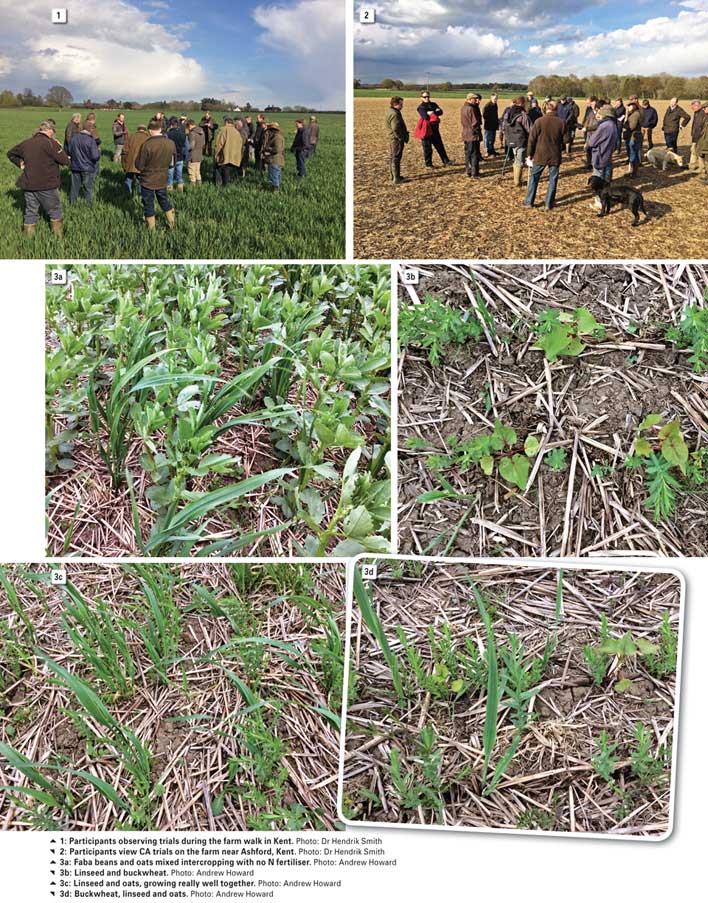 The trials included the following treatments:

On 29 April I made a presentation on Grain SA’s producer innovation programme at the Agriculture and Horticulture Development Board (AHDB) at Stoneleigh, Warwickshire, which continued into a long discussion in the afternoon.

The AHDB is a statutory levy board, funded by producers, growers and others in the supply chain. Their purpose is to equip levy payers with independent, evidence-based information and tools to grow, become more competitive and sustainable. Although the AHDB does have a focus on soil research and recommends ‘no-till’ as a possible soil management option for grain producers in the UK, CA is not yet promoted and supported widely as the key to sustainable grain production.

However, during the discussion, there was a great interest shown by their staff in CA and research approaches that bring researchers and producers closer to each other facilitating greater co-learning and impact. Hence, the producer-centred innovation systems approach followed by the Grain SA’s CA programme was highly appreciated as a model that could be used by AHDB in future.

The abundant potential of Germany’s loess-belt

In Germany, I was invited and hosted by Professor Thomas Weyer, soil science lecturer at the Soest University of Applied Sciences.

I gave two lectures to graduate students and one to other lecturers involved in the agricultural department. I also presented a paper at a conference with the theme: ‘Sustainable development in South Africa? What kind of impulses sets the partnership with North Rhine-Westfalia?’ The conference took place from 9 to 10 May in the Evangelian Academy of Villigst in the City of Schwerte.

The Soest University runs their experimental farm completely under CA practices, an achievement which they are very proud of (see Photo 4). Although the loess soils covering large parts of Germany have abundant potential supporting dryland wheat yields of between 10 t/ha and 12 t/ha, conventional tillage practices are still the dominant system used by German grain producers, due to the reasons mentioned above.

Loess is composed predominantly of silt-size particles, which is formed essentially by the accumulation of wind-blown dust; typically loess soils have a silt content of between 80% and 90% and a clay content of around 10% (see Photo 5). Loess soils are highly fertile, but they slake easily when the soil surface is exposed to rain and are therefore prone to water erosion.

The research conducted at Soest under the leadership of Prof Weyer, has shown that CA has a significant positive effect on the health of loess soils and further increase the productivity and sustainability of grain production systems in those areas (see Photo 6). 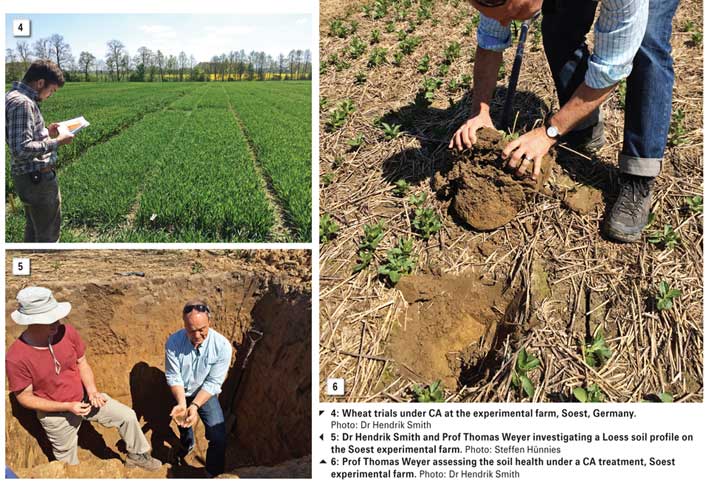 At the conference in Schwerte, the message to all the groups and individuals who are keen to invest their resources and expertise in South Africa, was to embrace the approaches and technologies of sustainable agriculture (such as CA), when working with producers and other key stakeholders in the agricultural sector of South Africa.

Although the adoption rate of CA in Europe is currently very low, there are positive signs appearing on the horizon that could soon turn the situation around. Once a strong philosophy and real actions are firmly adopted by and entrenched in various levels of the European agricultural sector, it could reverse the situation fairly quickly.

On the positive side has always been the very favourable soils and climate conditions and recently a positive change in policy and institutional support to the producers, which include carbon-friendly subsidies and incentive schemes linked to CA principles, soil management protocols and/or environmental services, which will give producers real incentives and rewards to change.

This, together with greater support from the corporate sector (in terms of producing CA equipment and machinery) and the research community, change for the better in Europe does look hopeful. The most promising sign for CA advancement in Europe, however, is the steady growth of active producer groups and networks, taking the lead and giving guidance on all the key elements of CA. In that respect, the lessons shared from the Grain SA’s CA producercentred innovation systems approach could be of great help.