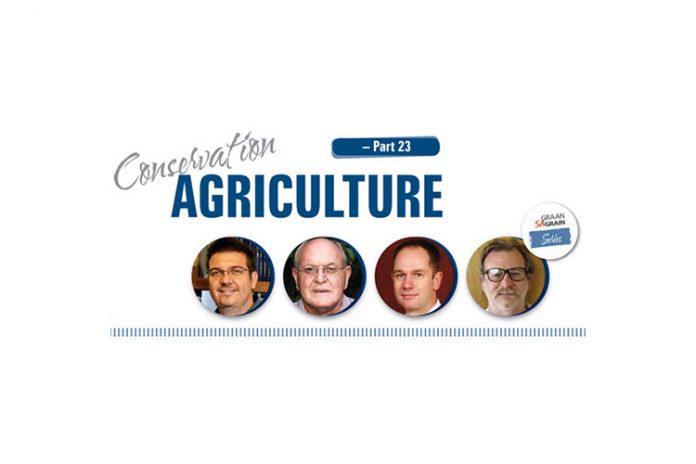 This article is the 23rd of a series of articles highlighting a specific crop species that can play an imperative role in conservation agriculture (CA)-based crop-pasture rotations. Besides improving the physical, chemical, hydrological and biological properties of the soil, such species, including annual or perennial cover crops, can successfully be used as animal feed.

Livestock production systems are in many ways dependant on the utilisation of forage species, in this case as an annual cover crop, and can therefore become an integral component of CA-based crop-pasture rotations. It is imperative to identify a plant species fulfilling the requirements of a dual purpose crop, i.e. for livestock fodder and/or soil restoration.

This article focuses on a tuber cover crop with crop potential used to improve soil conditions and to provide high quality forage for ruminants.

Fodder turnips are a member of the mustard family. They have large bulbous (round) or tapered roots of which a large percentage of the root is exposed above the soil and is available to grazing animals. These turnips are very attractive forages to ruminants as they are rich in carbohydrates. The turnips’ foliage is erect and succulent and is normally grazed in the first grazing cycle, followed by the roots.

The two most popular cultivars grown in South Africa are Mammoth Purple Top and Green Globe. Turnips are biennial crops which generally form seed the second year or even late in autumn if planted early in spring. Turnip leaves are usually light green, thin and sparsely pubescent (hairy).

In addition, a white-fleshed, large bulbous or tapered root develops at the base of the leaf petioles. The storage root varies in size but usually is 7,5 cm to 10 cm wide and 15 cm to 20 cm long.

Turnips are known to be cold-hardy and drought tolerant. The most vigorous root growth takes place when low temperatures are prevalent. Turnips are resistant to moderate frost and short periods of moisture stress. The leaves of these plants maintain their nutritional quality even after repeated exposure to frost. This species can produce a good crop even when receiving a rainfall as low as 350 mm – 500 mm per annum. Higher production yields can be obtained if irrigation is applied.

Turnips grow best in a moderately deep loam, fertile and slightly acid soil. Turnips do not do well in a soil that has a high clay content, is wet or poorly drained. For good root growth turnips need a sandy to loam soil that is loose and well aerated.

Soil fertility and weed control are crucial for high productivity. Nitrogen (N) and phosphorous (P) are the most important elements in forage production, levels of 75 kg to 120 kg N/ha and 60 kg P/ha for the growing season is normally recommended. If soils are low in potassium (K), application of 30 kg/ha to 60 kg/ha is recommended. Turnips will grow well in soils that have a pH range of 5 to 6,5.

The sowing density of turnips is 2 kg/ha to 4 kg/ha which can result in yields of between 5 t/ha to 10 t/ha depending on environmental and management conditions. The higher seeding rate will result in a higher proportion of leaves to roots in turnips. Turnips can be drilled, broadcast or aerial seeded. Oats and other small grains can be seeded with Brassicas as a cover crop mix.

Turnip seed is very small and it is critical that it is planted into a fine, firm and weed free seedbed with adequate moisture for germination and emergence. This species can also be seeded into the stubble of a previous crop with minimum- or no-tillage. When seeding into an existing crop, be sure to suppress the crop, since turnips do not compete with other species like grasses.

As with any crop, weed control is very important, especially during drought years when weeds compete with crops for water. Turnip seed does not germinate well in soils with too high temperatures and prefers temperatures of around 10°C to 15°C. This supports the planting of turnips into stubble as soil temperatures beneath plant material are lower.

Turnips can provide grazing at any time during the winter and autumn depending on the seeding date. This species can be used as a good foggage crop, which means it retains its forage quality well into the early winter even after extreme cold temperatures have occurred.

Turnip plants are ready for grazing or green feed when the forage is about 30 cm tall (70 to 90 days after planting). The pasture should be grazed for a short time and the livestock removed to allow the plants to regrow. A strip grazing system is desirable to ensure complete grazing.

The forage quality of turnip is outstanding with exceptionally high protein content and can be regarded similar to concentrate feeds. Bearing the latter in mind, precautions should be taken to prevent any animal health problems. Livestock should not be starved when put onto a field of turnips, as this will cause animals to over indulge causing serious metabolic disturbances.

Animals should be conditioned to turnips so that a healthy rumen microbial population can develop to ultimately digest the high levels of protein in forage turnips. Feeding low quality hay with high fibre content can facilitate optimal utilisation of turnips. Turnips could be grazed in approximately 60 to 90 days after planting depending on varieties.

Turnips just like many other Brassicas provide a 70% to 80% soil coverage. These species are well known for their ability to capture soil nitrogen (N) remaining after a crop harvest. Turnips produce large taproots that can grow as deep as 1,5 m and often deeper and can play a significant role in alleviating compaction especially when soils are moist and easier to penetrate.

Their deep rooting also allows these crops to scavenge nutrients from deep in the soil profile. As the large tap roots decompose, they leave channels open to the surface that increase water infiltration and improve the subsequent growth and soil penetration of crop roots.

Most Brassicas including turnips have been shown to release metabolic by-products that exhibit broad activity against bacteria, fungi, insects, nematodes and weeds. Brassica cover crops are often mowed and incorporated to maximise their natural fumigant potential.

Recent studies world-wide have indicated the potential use of turnips and other Brassicas for pest management. Preliminary results show that different varieties contain different amounts of bioactive chemicals and when using these species as green manure, fewer pests were noted. Like most green manures, Brassica cover crops also suppress weeds in the autumn with their rapid growth and canopy closure.

Regarding the use of a turnip cover crop in animal production systems, there are a few challenges regarding animal health. Since most Brassicas have a low amount of fibre it is extremely important that turnips should not constitute more than 75% of the ruminant’s diet.

It is therefore important that when turnips are grazed that a lower quality roughage be supplemented. If turnips are not grazed carefully, health disorders such as bloat, atypical pneumonia, nitrate poisoning and hypothyroidism can occur.

Turnip crops may suffer from a variety of diseases such as rhizoctonia rot, club root, turnip mosaic virus, root knot, anthracnose, leaf spot and white rust. Some of these diseases can lead to crop failure if rotation or other control measures are not used. Resistant varieties are available to some diseases. To prevent problems with diseases, Brassicas should not be grown on the same site more than two years in a row.

Turnips also are subject to insect damage and can include flea beetles, common turnip louse or aphid. These insects are more common under conventional tillage practices and can be controlled with appropriate insecticides when applied to the soil at planting.

Due to highly variable climatic conditions in South Africa production of fodder turnip (cultivar Mammoth Purple Top) in Limpopo and Gauteng yielded the most when planted in February and defoliated late August, resulting in 5,1 t/ha and 3 t/ha of which 2,4 t/ha and 1,7 t/ha were leaves and 1,7 t/ha and 1,3 t/ha tubers, respectively.

Research has shown that turnip produces high-quality forage and livestock eat the stems, leaves and roots of turnip plants. Aboveground parts normally contain 15% to 25% crude protein, 65% to 80% in vitro digestible dry matter (IVDDM) with the roots containing 8% to 14% crude protein and 80% to 85% IVDDM. The mature forage Brassica maintains a high nutrient concentration into autumn and early winter. Turnips can be 80% to 90% digestible. By comparison, high quality lucerne hay is approximately 70% digestible.

Turnips are readily grazed by cattle and sheep and provide useful supplementary grazing in the mid-winter or late autumn when warm-season grasses and cereal forages are non-productive. Due to their nutritive value, turnips are especially useful for feeding animals with high nutritive requirements.

The Brassica species are valuable cover and forage crops. They do however have special management requirements especially when it comes to utilising them for animal grazing. As a dual purpose crop, their specific management requirements are negligible when the soil conservation benefits are realised. It does take good planning to integrate turnips into a grain production system, but when this crop is being used as part of a multi-functional cover crop programme and/or mix, specifically to restore soil quality, this system is much easier to apply with substantial soil and animal grazing benefits.