Home RELEVANT ARC-SGI researchers were Sydneysiders for a week

Someone who lives in Sydney and its suburbs is colloquially known as a ´Sydneysider´. Eight researchers from the ARC-Small Grain Institute (ARC-SGI) in Bethlehem became instant Sydneysiders when they recently attended the 9th International Wheat Conference (IWC) that was held in Sydney, Australia.

The IWC is one of the most important events on the calendar of anyone involved in the wheat industry. It has become the premier international scientific meeting for wheat.

Over 500 wheat researchers/scientists from more than 60 countries all over the world came together to present new research findings and developments of all aspects of wheat research. The opening address of the congress was delivered by Dr Sanjaya Rajaram, winner of the 2014 World Food Prize award in recognition of his outstanding scientific research that led to a dramatic increase in world wheat production in the years following the Green Revolution.

Multiple aspects of wheat research were discussed in detail at the conference with an increasing focus on drought tolerance and climate change. As a result of climate change, the wheat types planted over the world have changed, planting dates have been delayed by ten days over the past 20 years, but maturity has remained basically unchanged. Over the last 50 years, temperatures have increased by 0,05°C to 0,2°C per decade. In the same time, flowering of wheat has advanced by 0,5 to one day per decade.

A special focus has been placed worldwide on increasing wheat yields in all the production regions around the world. The current wheat production of 3,2 t/ha globally has to increase to 4,3 t/ha by 2030 to meet the growing demand. This means that at least a 1,6% yield increase per annum is needed from the current level of below 1%.

In total 50 oral presentations were delivered by a selected array of speakers, covering a broad range of topics. Well-known names in the international wheat arena, such as Drs Hans-Joachim Braun, Judi Adams, Ron DePauw, Richard Trethowan, Alexey Morgounov, Matthew Reynolds and Julie King, to name a few, contributed to the excellent manner in which the conference was presented.

The presentations were all international in scope and included the latest research topics on technological interventions for increased yields and stability, focus on specific molecular markers and association mapping, bio-economic assessments of the production of wheat diseases such as rusts and Fusarium head blight, physiological breeding strategies and novel phenotyping systems, as well as quality engineering with an emphasis on protein, alpha amylase levels and lutein. The conference was characterised by very well-prepared and -presented lectures.

Each of the sessions has provided many important insights and was designed to cover all the different aspects of wheat research, from agronomical constraints throughout the globe, how the world should address food security, various abiotic and biotic stresses of wheat to wheat genetics and the use of modern molecular mechanisms to improve wheat production. All these aspects were well represented in this symposium and there was good participation from attendees.

This conference has provided an excellent opportunity for researchers from around the world to take notice of the current advances in wheat research, development and technology and to hold open and robust discussions on the full range of important issues currently being considered in the wheat industry. Previously established relationships were strengthened while networking was also successfully done with a number of individuals and institutions.

In the next 20 years breeding for high-yield potential remains the first priority, as the available planting area for wheat is unlikely to increase. Drought tolerance for wheat must be strengthened because cultivars with drought tolerance and better water use efficiency are urgently needed. New genes and genetic resources must be explored to realise higher genetic gain. Gene-specific markers will play an important role in facilitating the genes for disease resistance and quality. 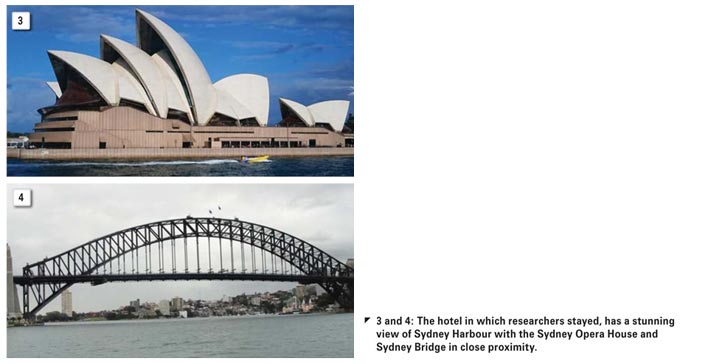 The conference was held in the Four Seasons Hotel, situated in the famous Rocks district. The hotel has a stunning view of Sydney Harbour with the Sydney Opera House and Sydney Bridge in close proximity.

Sydney was the site of the first British colony in Australia, which was set up in 1788. The first wheat grown in Australia was farmed on a spot which is now a portion of Sydney’s Botanical Gardens. For the first harvest 8 acres (3,2 ha) of wheat were planted. Today almost 14 million hectares are planted to wheat in Australia.

With gratitude to the Winter Cereal Trust for financial support of this annual survey and to Agbiz Grain members and milling companies for providing the crop samples.