Following soybean, peanut and rapeseed, sunflower oil is the fourth most important vegetable oil in world trade with annual sunflower production of around 18 million tons and a cultivated area of over 47 million ha. As it is relatively drought-tolerant and utilises soil nutrients efficiently due to its well-developed and deeply penetrating root system, sunflower is usually grown in rain-fed systems.

Worldwide, sunflower is mostly produced for its oil. Oil concentration (usually expressed in percent of seed dry mass) mainly determines the industrial yield of the grains. As a consequence, a 2% price premium is given by buyers in some countries for each percentage point the oil content increases between 40% and 45%. However, a 2% price discount is also taken for each point oil content decreases between 40% and 38% and even a larger penalty as oil percentage decreases further. Both seed yield and oil percentage are accordingly of importance to producers in order to maximise gross income.

Under optimum water and nutrient requirements, temperature and intercepted solar radiation play a key role in determining yield components and grain quality in sunflower. Grain oil concentration is mainly determined by the amount of the photosynthetically active radiation intercepted per plant during the grain-filling period. In order to maximise the use of natural resources, the appropriate planting date is very important. This ensures good seed germination as well as the timely appearance of seedlings and the optimum development of the root system. 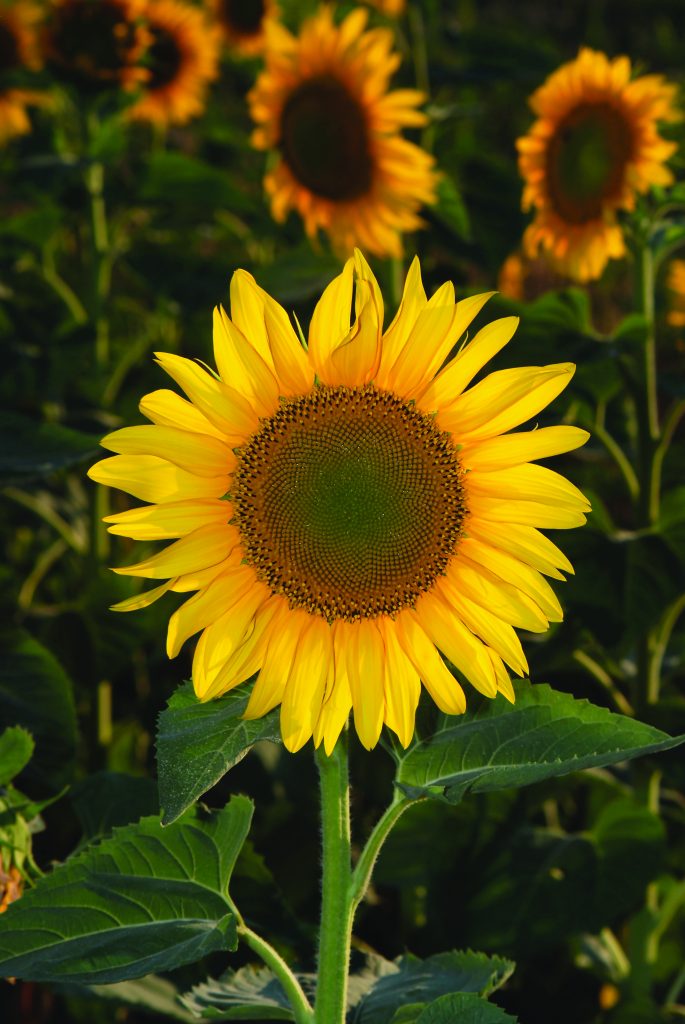 Critical periods for yield and quality components
The relative effect of environmental factors on a given component such as oil content vary according to the crop growth stages, because oil yield components and grain quality are defined in different phenological stages. Seedling emergence is a sensitive stage during sunflower establishment. Abiotic stresses, such as high soil temperatures (above 40°C), can cause delayed emergence, resulting in uneven stand and ultimately poor yields.

A recently conducted South African study indicated that sunflower seedlings exposed to higher than optimal soil temperatures during establishment, experienced impaired seedling development (emergence and root growth). It was also evident that sunflower seedlings can survive and develop at 40°C, but at temperatures higher than this seedling emergence and development will be inhibited.

It has internationally been found that the number of seeds per unit area, which is the main yield component in cereals and oilseed crops, is closely related to the crop growth rate during the critical period for grain set. It was concluded that the critical period for the seed number determination is between 24 and 30 days after anthesis, while grain weight and grain oil concentration are determined during grain filling. It is the only stage during which the determinations of the oil yield components are partially overlapped. Therefore, environmental conditions during this period have a highly significant effect on yield.

In order to investigate the influence of planting date on oil content as well as oil and seed yield of sunflower, fourteen field trials from the sunflower national cultivar evaluation trials were evaluated. It was done at different localities with different planting dates in the North West and the Free State from the 2016 to 2018 growing seasons. A randomised complete block design with three replicates were implemented for each site. Grain yield was recorded for each trial individually and seed samples were sent to the Southern African Grain Laboratory (SAGL) for oil content analyses.

The moisture free oil concentrations from the 14 field trials during the 2016 to 2018 growing seasons, as analysed by SAGL NPC, are shown in Graphs 1a and 1b. 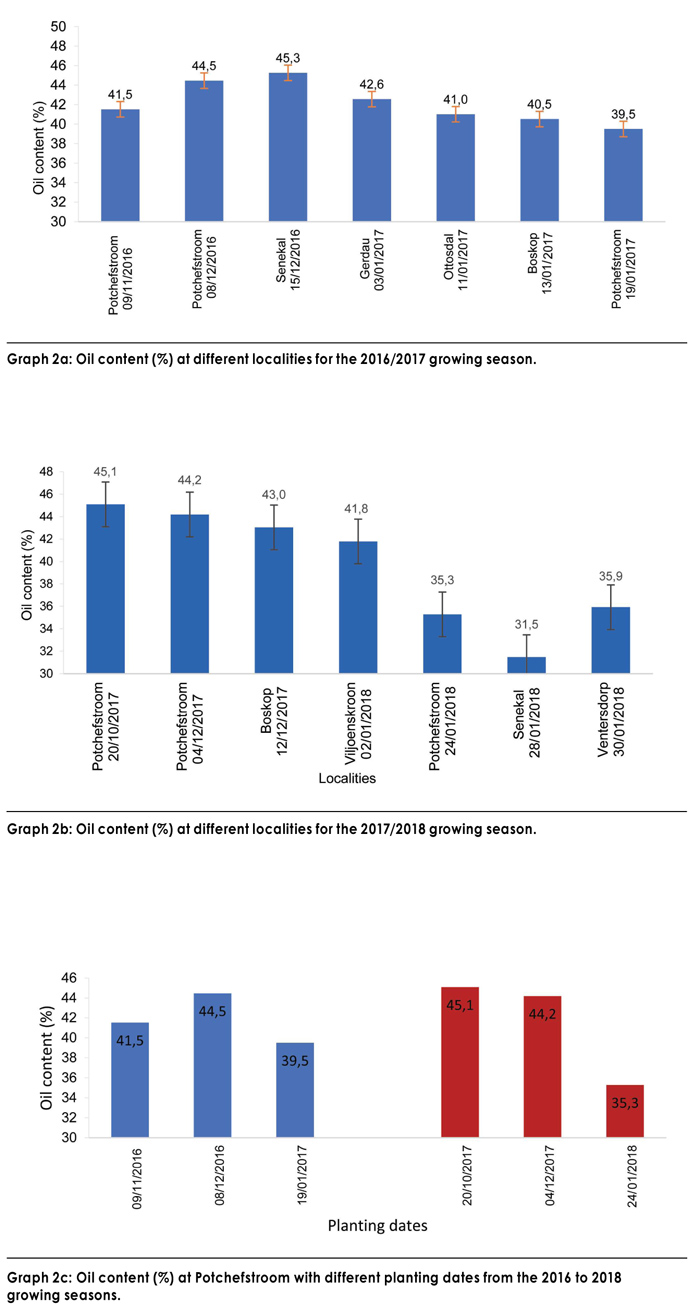 Oil yield per unit area is the ultimate target in growing high-oil sunflower genotypes. Components of oil yield (number of plants per unit area, grain number, weight per grain and grain oil concentration) and quality (fatty acid composition) are genetically determined, but they can be affected to a different extent by environmental factors that could highly vary during the crop cycle. Oil yield (t/ha) was affected by delaying in planting dates for both seasons. In the 2016/2017 growing season, the highest oil yield was achieved at Potchefstroom, planted in the first week of December, whereas the lowest oil yield (more than half oil yield reduction) was at Potchefstroom with a planting date of 19 January (Graph 3a). In the 2017/2018 growing season, the highest oil yield was recorded at Boskop, planted in the second week of December and the lowest oil yield was recorded in Senekal, planted in the last week of January (Graph 3b). Comparing the oil yield at one locality (Potchefstroom) with different planting dates (Graph 3c), the late planting date (end of January) resulted in a 62% reduction in oil yield during both growing seasons. 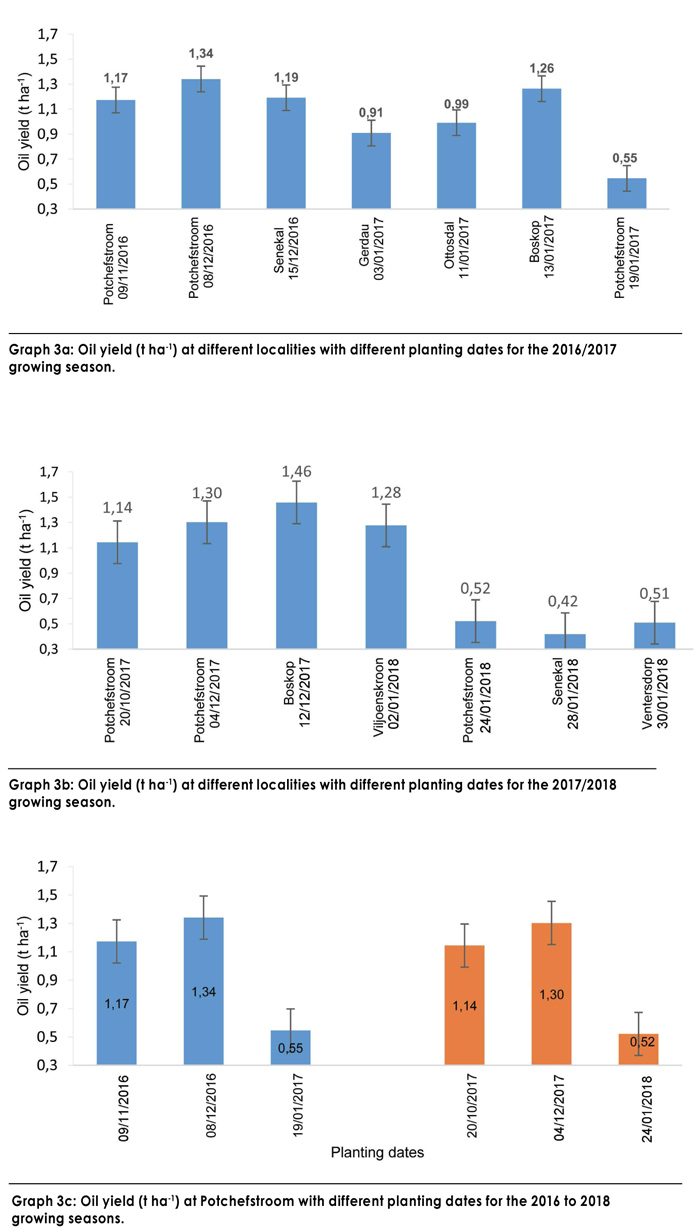 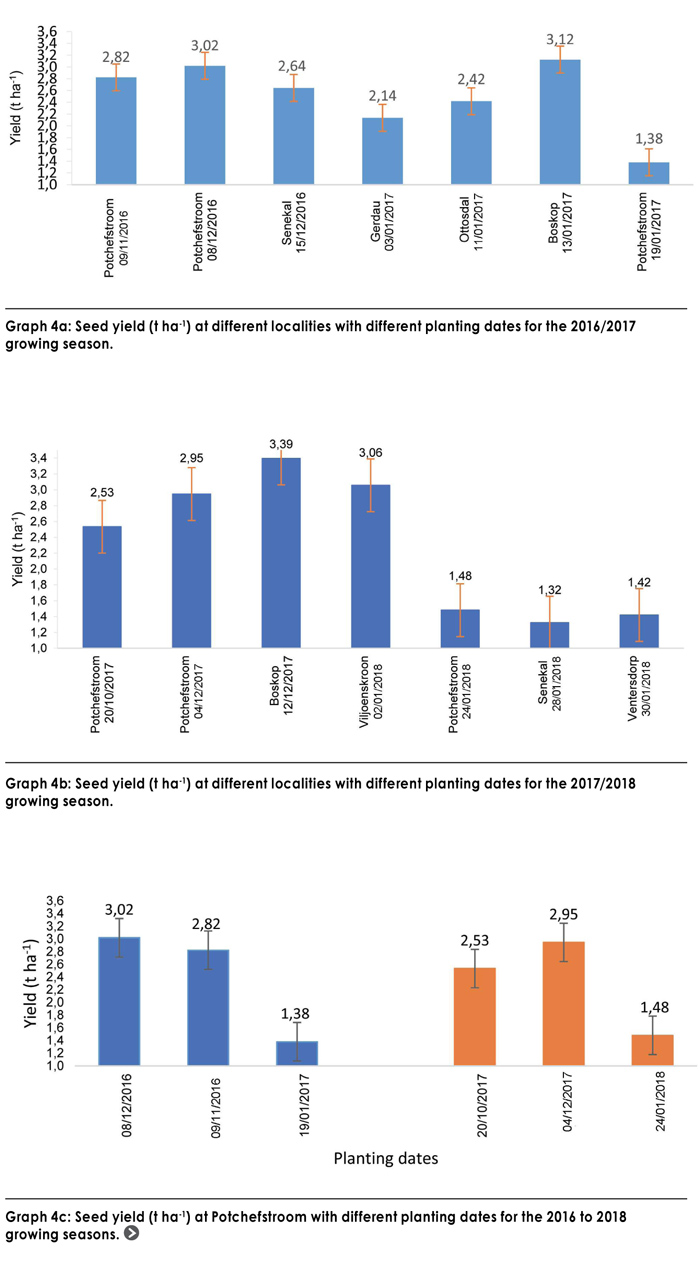 Conclusion
This study demonstrated that environmental and agricultural factors such as location, planting date and hybrid may significantly modify oil content and oil yield of sunflower grown in the North West and the Free State. This suggests that these could be used as management tools to improve sunflower seed yield and increased oil content. Significant differences were observed among the sunflower hybrids regarding oil content, oil yield and seed yield. Late planting reduced the seed and oil yield by almost 50 % and oil content reduced significantly compared to the optimum planting date.

The real SOUTH AFRICA – not the new South Africa

Arithmus - September 29, 2018
0
September 2018 JANNIE DE VILLIERS, CEO, Grain SA If I recall correctly it was during a strategic session with the Agri SA team that Mr Chris...