Home ON FARM LEVEL Gerbils in agriculture: Impact and ecologically based control

Grain crops worldwide are impacted by various pests that affect yield, profitability and in some cases food security. An important, but often overlooked pest of grain crops, is rodents.

In a recent meta-analysis it was found that rodents can cause up to a 15% crop loss in Afro-Malagasy smallholder farming systems. While research investigating crop losses in commercial farms is lacking, similar numbers can be expected.

For example, in the 2012 summer rainfall maize planting season it was estimated in a Grain SA survey that around 54 377 ha of maize was lost due to rodent pests. As such it is important to realize that the rodent impact of grain crops span from small-scale subsistence farmers to large-scale commercial operations and is an important factor in crop production.

Even though Africa has around 381 rodent species, only 5% are considered as rodent pests. In smallholder farming (and some commercial operations) across Africa, crop damage is dominated by Mastomys spp. (multimammate mouse, vaalveldmuis).

Gerbilliscus spp.
There is currently eleven Gerbilliscus species which are grouped into three geographically defined clades: The western, eastern and southern clades. The southern clade is important as grain pests for South Africa and it comprises three species; Gerbilliscus afra, G. brantsii and G. leucogaster (Figure 1).

Gerbils are nocturnal (night active, large eyes – therefore the Afrikaans name nagmuis) and terrestrial and they excavate extensive burrows. Like most rodents, gerbils have a cyclic reproduction cycle which is driven by rainfall and food resources.

Under natural conditions gerbil breeding season is between September and April, with a cessation of breeding in dry seasons (May to August). Under varying summer rainfall gerbils can have a bimodal tendency (e.g. early and late seasonal breeding). Gerbils have a number of natural predators including most small carnivores (e.g. mongooses, striped weasels, striped polecats, felids and canids), avian predators (e.g. owls and eagles) and reptilian predators (snakes).

Gerbils as agricultural pests
During the last six years rodent pests have been studied in both rural (smallholder farming) and commercial farms to develop ecologically based rodent management options. This research has been funded by the Maize Trust, the Sasol Agriculture Trust, the European Union and the African Union.

Extensive research and monitoring were done during the period 2013 to 2016 in the Hoopstad area on gerbil damage and population cycles (in collaboration with the ARC-Plant Protection Research Institute and Centre for Wildlife Management, University of Pretoria). Gerbil populations were also monitored in the Sandveld Nature Reserve (Bloemhof) to contrast with the commercial farming areas. Since the distribution of gerbils coincides with the summer grain farming areas in South Africa, it is inevitable that these species will impact summer grain crops. 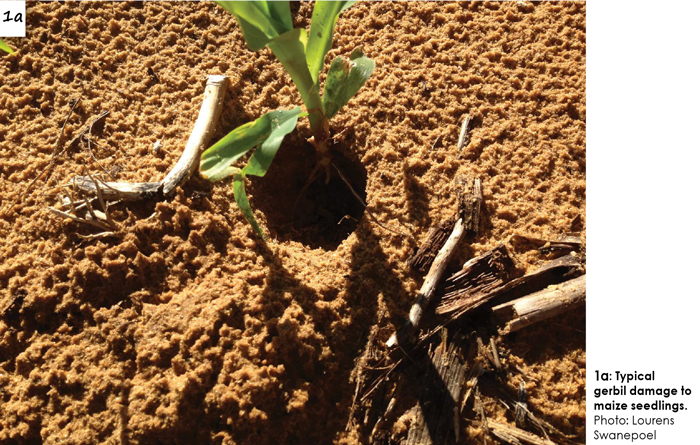 In the Hoopstad area it was found that both gerbil species (Bushveld and Highveld gerbil) inhabited the grain fields, but that the Highveld gerbil dominated the crop fields during the planting and vegetative stages (and was more likely to damage crops).

The Bushveld gerbil was more likely to be found in the natural vegetation surrounding the fields. Interestingly, the Bushveld gerbil was also the dominant species trapped in the Sandveld Nature Reserve. Diet analysis showed that both species incorporated crop seeds (maize and/or groundnuts) into their diets, but the Highveld gerbil primarily selected seeds while the Bushveld gerbil shifted its diet to include plant material and insects. This highlights the fact that seeds in crop fields play an important role in gerbil population cycles. 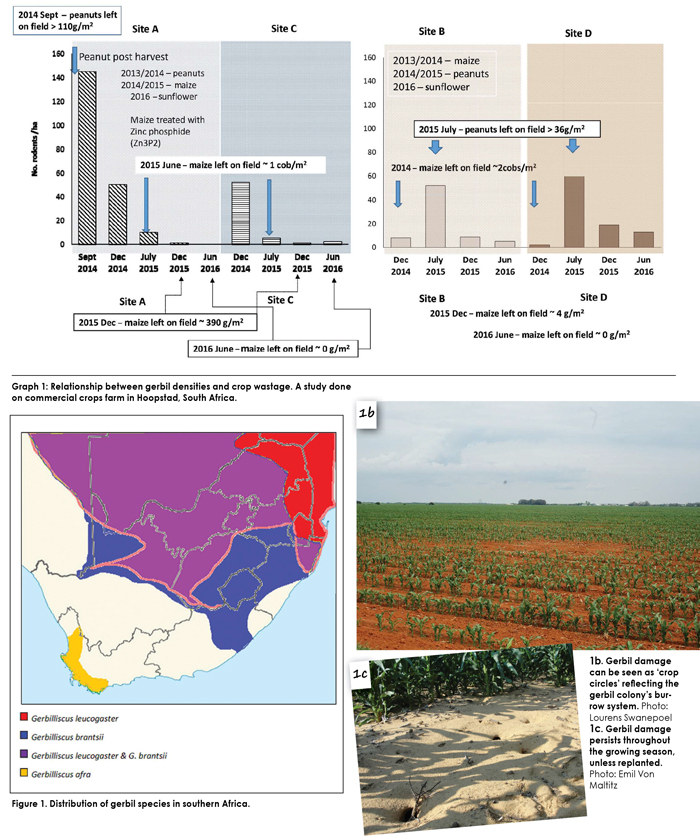 Damage
Gerbil damage to grain crops is restricted (as far as research has shown) to the germination and emergent seedling stages. Gerbils will typically dig up the germinating seed, or feed on the roots/pit of the young emerging seeds (Photo 1a). Damage can easily be seen as ‘crop circles’ which reflect the burrow systems of the gerbil colony (Photo 1b and Photo 1c). Gerbils can damage all crops including maize, groundnuts and soybeans.

Damage to crops is affected by the density (number of gerbils) in the field as well as the crop planting stage. Gerbil density is primarily affected by the rainfall and food resources.

In crop rotations (groundnut to maize) gerbil densities declined, but densities can still be sustained by maize wastage (Graph 1). Here it can be seen that crops following groundnut cropping will have a high likelihood of being damaged by gerbil populations.

However, even in non-rotating cropping systems (maize to maize), crop wastage will still drive gerbil populations. A key factor in the gerbil population is that it manages to maintain reproductive potential even through the dry season.

Under natural conditions the populations would have crashed during the dry season, but in the crop fields they maintain production. This means that a higher density will start to breed in the early rainy season, with higher densities during crop plant seasons, and hence more damage. 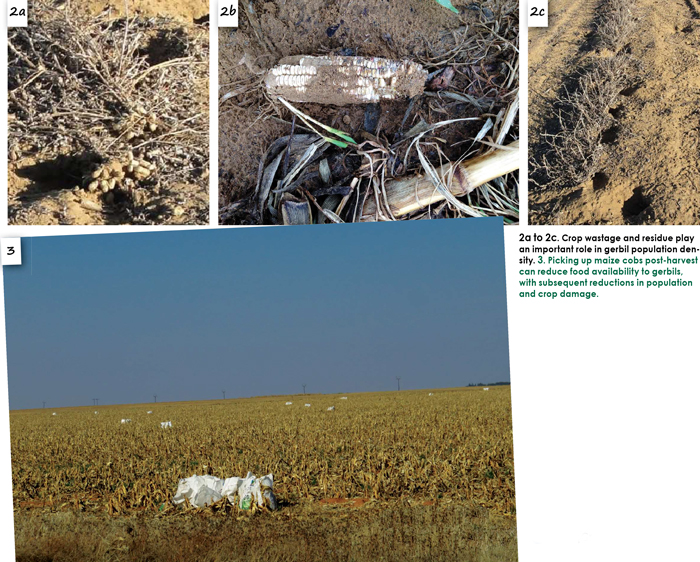 Firstly, gerbils are native rodent species inhabiting the landscape. As such, management plans should aim to achieve rodent population suppression, rather than elimination. This is important since these species still play important ecological roles in the ecosystem. Gerbils are a food source for many species and thus a key factor in predator diversity. Similarly, the burrow activity of gerbils is important for soil aeration and water infiltration.

A second important point is that the management program should aim to control only the pest of concern and not impact the whole ecosystem.

Firstly, grain wastage during harvest should be kept to a minimum. Producers should make sure the combines operate at acceptable levels of wastage.

Secondly, if wastage occurs, all attempts should be made to remove or reduce such wastage. There are several options; either pick up corn cobs post-harvest (Photo 3) or use livestock grazing. It was found that sites grazed post-harvest had significantly lower gerbil density, and a much lower crop impact.

Thirdly, try to encourage natural gerbil predator populations (Photo 4a to Photo 4e). This can be achieved by providing nest boxes for owls and maintaining patches of natural vegetation for breeding and resting sites for mammalian predators.

For example, by monitoring ten barn owl boxes in the Ottosdal area, Lushka Labuschagne (an MSc student at the University of Pretoria) estimated that ten breeding pairs of barn owls can remove roughly 14 600 rodents annually. 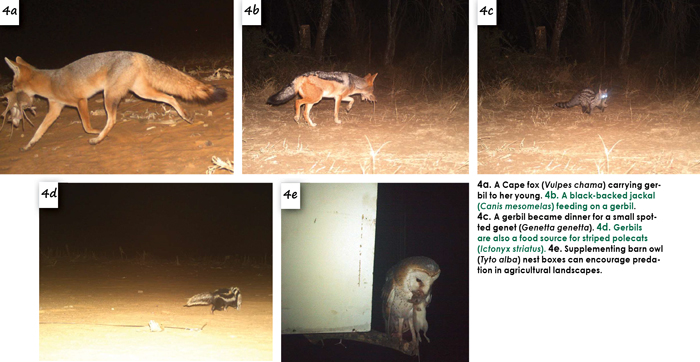 There has been positive damage reduction by applying zinc phosphide, but this product is not registered as a rodent control agent in South Africa.

Through the University of Venda and various other African universities, we are currently looking into the option of predation as a component in rodent pest control. This project is funded by the African Union (EcoRodMan project: https://ecorodman.nri.org/).

Brown rust of sunflower: A scarce, but potentially damaging disease

Arithmus - May 19, 2005
0
May 2015 MOSES RAMUSI and BRADLEY FLETT, ARC-Grain Crops Institute Brown rust is caused by the fungus Puccinia helianthi Schw. – which is capable of causing yield...