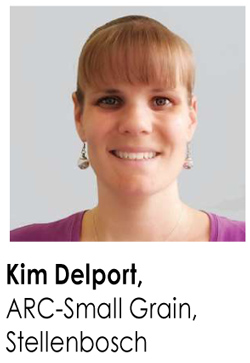 The first step in breeding for a new cultivar starts with crossing two desirable parents. All crosses for the ARC-Small Grain breeding programmes are done in glasshouses at ARC-Small Grain in Bethlehem. Each crossing parent provides desirable traits that are beneficial to the final cultivar. This may include amongst other things, disease resistance, flour quality, drought resistance and most importantly, yield. International wheat nurseries are also utilised in order to diversify and improve South African lines.

Seeds from the resulting crosses are harvested and again planted in a glasshouse in order to multiply the seed. The following generation is then sent to the respective production areas where the seeds will be planted in the field for further evaluation. Due to phenotypic plasticity, all material must be evaluated in the region where it will eventually be propagated. This is because phenotypic plasticity causes the same line to exhibit different agronomic traits when exposed to different environmental conditions. Material for the irrigation wheat breeding programme is therefore planted in the Vaalharts irrigation scheme.

The early generations, that are still segregating (F2 to F5), are planted in the field as single rows. Each line will be evaluated and selections will be made based on performance and desirable agronomic traits. Each year there are thousands of single rows screened that could potentially be a new cultivar. The selected lines are harvested as either single ears or single plants which are again planted as single rows in the next year (Photo 1).

After four years of consecutive screening, the selected lines are progressed to advanced trials. The entire row of the selected lines is harvested and screened for yield and flour quality at the quality laboratory in Bethlehem. Lines with adequate quality will be planted as 6 m2 plots in advanced trials. Junior and senior trials are planted in both the cooler (Vaalharts) and warmer (Loskop) irrigation areas. This further improves selections for different environments.

Using data collected from the junior and senior trials, lines that passed all selection criteria are finally planted as elite trials. Elite lines are planted at multiple locations (on producers’ farms) in both the warmer and cooler irrigation areas. During this time, the top lines are evaluated by the South African Grain Laboratory (SAGL).

After SAGL has completed quality analysis, it will approve a line for final release. This will be approximately eight to nine years after the initial cross. After SAGL has approved a line for release, breeders can apply for plant breeders’ rights. This gives the breeder executive control over the seed for the new cultivar. At this point the new cultivar will also be commercialised and actively marketed by a seed company.

Renoster and Koedoes are the two newest cultivars available from the ARC (Photo 2). Both of these cultivars have performed extremely well during the last two years in the national cultivar trials. Both cultivars have a short growth period and are harvest-ready approximately ten days prior to our other cultivars on offer. Producers are therefore able to discontinue irrigation sooner, resulting in less water usage.

However, producers should keep in mind that the falling number could be affected if these cultivars are still irrigated after maturity. Even so, downgrading as a result of over-irrigation has not been observed, since the falling number was still safe above 250 seconds.

For further information please contact Kim Delport at 021 809 3558 or coetzeek@arc.agric.za.