Phase 2 of the overarching winter grain carbon footprint project involved the determination of the carbon sequestration potential of different farming and cropping systems, taking into account the crop rotations, tillage regimes and organic matter inputs. In Part 1 (January 2019) the carbon emissions of grain farming in the Western Cape were assessed. The carbon footprint project is funded by the Winter Cereal Trust.

Soil carbon sequestration, according to Paustian et al. (2000), is a reduction in atmospheric carbon (C) or greenhouse gasses via the process of photosynthesis in plants into the different soil organic carbon pools. The loss of soil organic carbon through tillage has been the main source of C into the atmosphere (Ingram and Fernandes, 2001).

It has been considered important to identify and quantify the effect of different management systems (e.g. crop rotation, tillage) on soil C levels to help prevent C losses leading to soil degradation in the Western Cape grain regions.

The carbon sequestration methodology and results in this study can therefore be used within the grain industry as an adaptive management tool to facilitate the adaptation of production systems, to minimise emissions and optimise carbon sequestration potential in view of long-term sustainability and climate resilience.

Project scope and methodology
The scope of Phase 2 included specific activities (cropping, tillage practices and soil inputs) at the two experimental farming entities in each of the regions, Swartland (Langgewens) and Southern Cape (Tygerhoek) as presented in Figure 1 to determine the carbon sequestration potential per hectare. 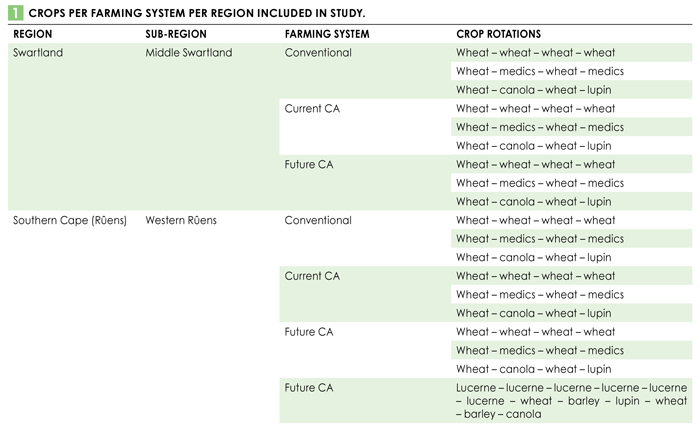 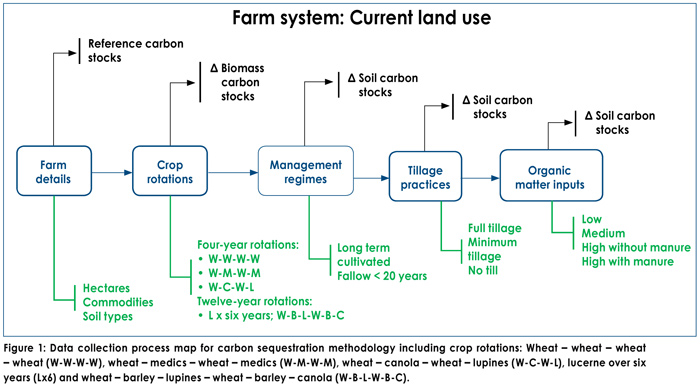 One of the main methodologies used to determine the carbon sequestration potential for winter grain farming in this project was the International Panel on Climate Change (IPCC) Good Practice Guidance for Land Use and Land Use Change and Forestry (IPCC, 2003). This article only covers the findings from this methodology.

Data and inventory
In order to calculate the carbon sequestration potential using the methodologies discussed, data was gathered from literature and industry experts. The following data was required for the calculations:

Currently there are four systems (personal communication Dr Johan Labuschagne) in operation at the experimental farms. The farming systems included in this study are as follows:

The carbon sequestration methodology with data inputs and outputs can be seen in Figure 1.

The inventory for the experimental farms Langgewens and Tygerhoek had crop rotations and farming systems as presented in Table 1.

Results
The results are presented in tC/ha/year and tCO2/ha/year for the different systems over a 20-year period: 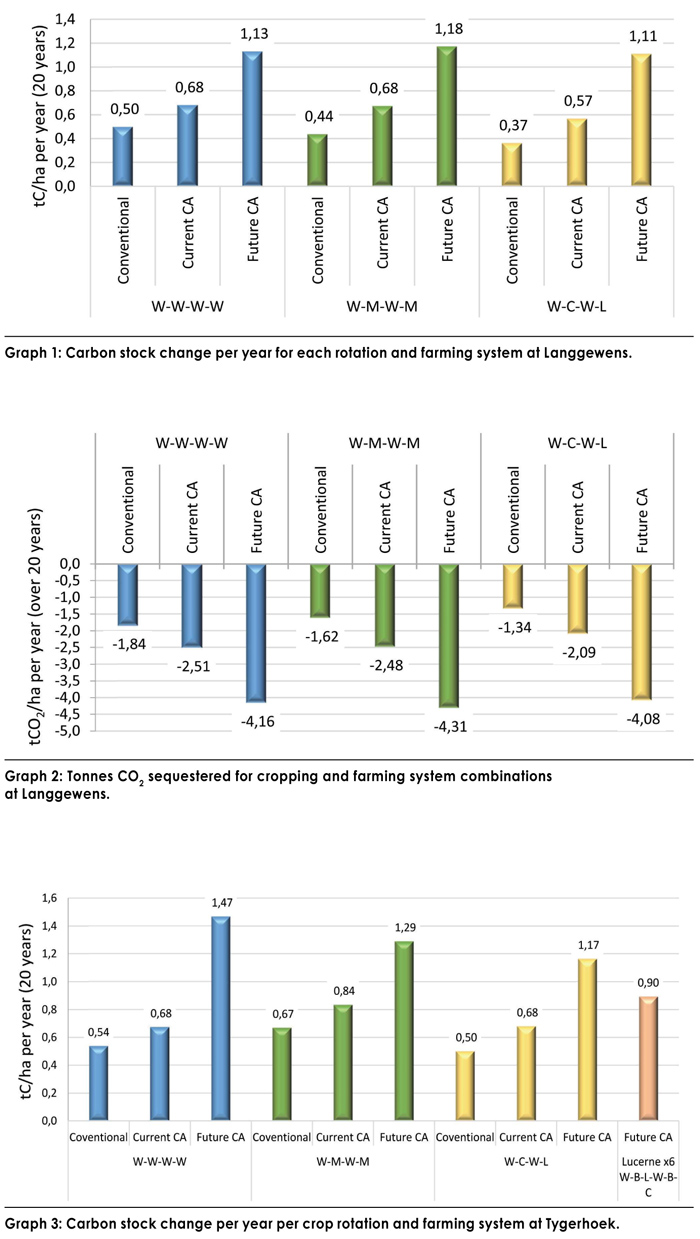 Carbon sequestration results for experimental farms
The C stock (content) changes per hectare for Langgewens and Tygerhoek experimental farms showed a 166% and 132% increase respectively from the conventional to future CA farming system over a 20-year period. The cropping systems under the future CA system that accumulated the highest C stock annually was the wheat – medics – wheat – medics (W-M-W-M) at Langgewens and the wheat – wheat – wheat – wheat (W-W-W-W) at Tygerhoek due to the higher biomass output of these crops and the high organic inputs allocated to medics from livestock grazing.

Graph 1 and Graph 2 graphically present the results for Langgewens and Graph 3 and Graph 4 for Tygerhoek.

The tC accumulated annually is converted to tCO2 by multiplying by the factor 44/12. The CO2 sequestered is a carbon sink which is reported as a negative value.

At Tygerhoek the future CA crop rotation with lucerne (six years) followed by wheat – barley – lupines – wheat – barley – canola (W-B-L-W-B-C) had the lowest carbon stock change under the future CA system due to all the lucerne biomass being harvested (grazing or baling) with no residues remaining on the field. 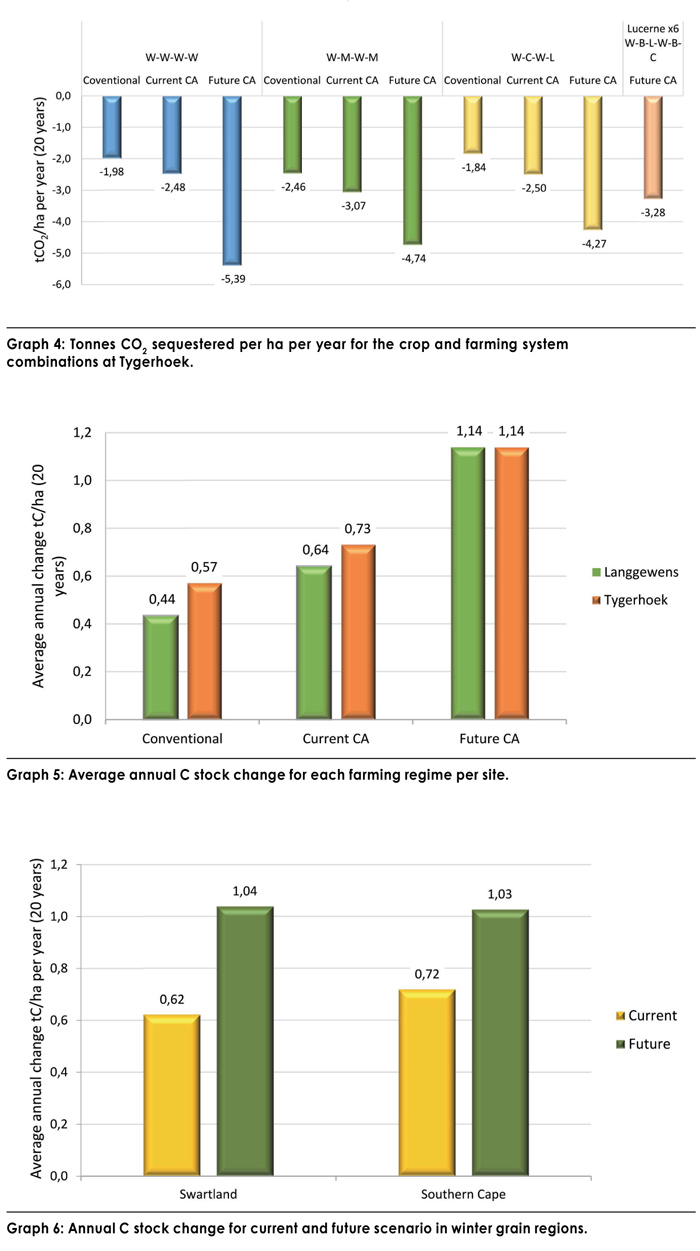 The average carbon stock results per farming system for the sub-regions Western Rûens and Middle Swartland are presented in Graph 5 and these results once again illustrate the rising annual C stock accumulation from conventional to future CA systems.

Looking at the current and future scenarios, where a combination of the farming systems will be practised, the difference in the results per region are significant as presented in Graph 6.

The extrapolated results indicate a 67% and 44% increase in C stock accumulation per hectare from the conventional to the future scenario in the Swartland and Southern Cape regions respectively. The corresponding potential CO2 sequestered per ha per year for the current and future scenarios is presented in Table 2.

Conclusion
The results obtained using this higher level, coarse IPCC methodology support the hypothesis that the future CA regime across all crop rotations yields the highest annual C stock accumulation (or sequestration) in the system. Specific combinations in farming system and crop rotation practices made the greatest contribution to the annual change in C stocks and CO2 sequestration.

These results were extrapolated to the winter grain regions for the current (conventional and current CA) and future (current CA and future CA) scenarios and followed the same pattern of increased C stock and CO2 sequestration for the future scenario.

Note that the results from these high-level methodologies give an indication of potential C stock changes and CO2 sequestration and not accurate site specific results. In order to obtain site specific results, other more detailed methodologies, specifically using the Environmental Policy Integrated Climate (EPIC) model, were also tested and the results are available in the annual report.

Thabang - August 10, 2021
0
With the valuable addition of the modern plant breeding technique, genome editing (GE), governments are in disagreement whether GE should fall under the same...

Benefits of winter cover crops in a mixed farming system