Since converting from conventional tillage to no-tillage, the functionality of cropping systems across Argentina has changed
considerably. The newly introduced agronomic management practices have unlocked unused potential of the soil-crop system while simultaneously enhancing sustainable crop production.

In turn, cropping systems have become more stable over long-term periods and have enabled producers to plan each season according to prevailing climate conditions and on-farm needs.

Cropping systems
Soybean, maize and wheat are the main crops produced across the Argentine Pampas, accounting for 78% of the 32 million ha used for crop production. Depending on climate conditions, producers plant a single (full-season) soybean or maize crop annually with the double-cropping system implemented where soil water levels are adequate (Table 1). 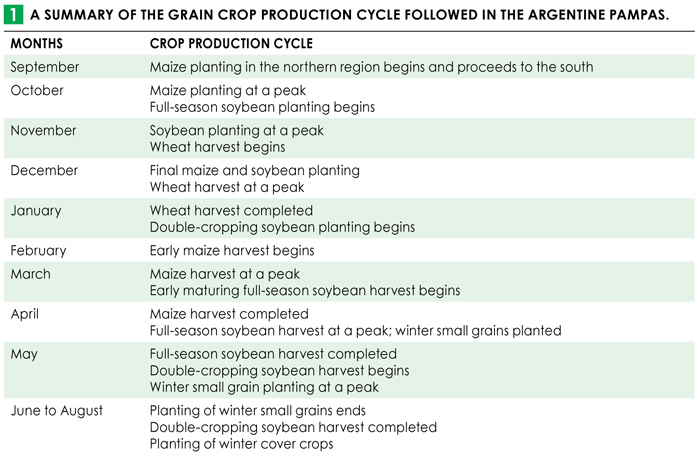 In the double-cropping system, wheat is drilled into crop residues directly after the summer crop harvest is completed. The crop residues protect the soil against strong winds occurring throughout the winter season and decrease evaporation losses from the soil surface.

Seasonal rainfall variability makes crop production in the Argentine Pampas challenging, ranging from droughts to extreme wet weather. In some years, high rainfall continues until late in May. This causes the germination of soybean seeds in the pods prior to harvest, resulting in severe crop losses. More recently, producers have been forced to establish soybean and maize later in the season (December) due to the delayed arrival of rainfall.

This has resulted in a prolonged fallow period prior to planting and subsequently more herbicide applications. To avoid this, cover crops are established after harvest, introducing a green fallow period to protect and improve the soil and outcompete weeds. However, low soil water levels are the main constraint on this practice, especially in the semi-arid region of Argentina. Ongoing on-farm and research trials are currently investigating potential management practices to overcome this challenge.

Weed management
In the former conventional tillage systems, weed control was one of the major challenges producers encountered year-round. As soils were frequently disturbed, weed seeds were constantly brought to the soil surface initiating germination due to favourable soil temperatures. In addition, weeds established during fallow periods exhausted soil water and nutrients. This highlighted the need for alternative weed control approaches to eliminate the inefficient facets of the cropping systems.

When converting from a conventional tillage to a no-tillage system, the spectrum and occurrence of weed species change. To combat this, Argentine producers are aiming to follow approaches which are sustainable over longer periods:

Cover crops
In the humid Pampas, the wet season peaks during March and provides the option to establish cover crops after the soybean or maize harvest. Current research is investigating several cover crop species to increase mulch cover build-up, promote crop diversification and the provision of cattle forage during the dry season.

The choice of winter cover crop species is important due to the variation in growth cycles and resource demands. For example, vetch may provide nitrogen to the cropping system (nitrogen fixator), but its initial growth rate is very low and consequently controls autumn weeds poorly.

Grass species, such as triticale and oats, compete strongly with weeds by maintaining high growth rates. Weeds may be present in these grassy type cover crop stands (without any herbicide applications), but their growth is poor and they have little effect. It is important to acknowledge that grass species have a high water demand and may exhaust available soil water.

A 23-year long-term trial has investigated the effects of integrating a cover crop (triticale) in a maize/soybean cropping system in the Argentine Pampas. In the grain-only system (without a cover crop), soybean yields were approximately 9% lower than the same rotational system with a cover crop included over 23 years (Graph 1). 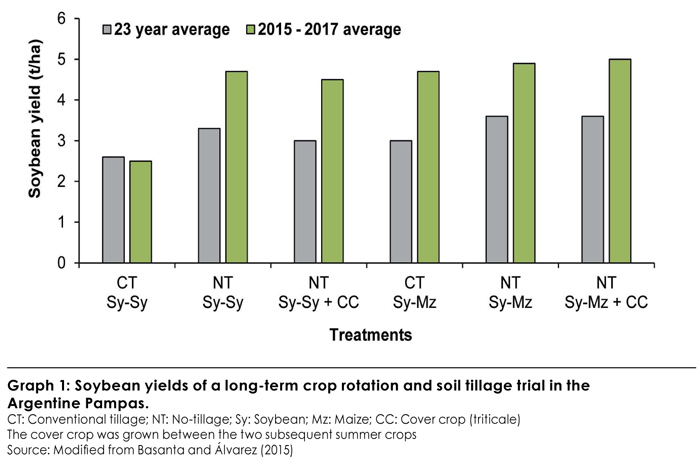 Also, the soybean yield under no-tillage and in rotation with maize was approximately 1 t/ha higher compared to monoculture soybean under conventional tillage, highlighting the impact of agronomic management factors on crop yields. On average, the soybean-maize plus cover crop system yielded only 18% lower compared to a no-cover crop system over 23 years (Graph 2). These lower maize yields were attributed to lower soil nitrogen levels following the cover crop. 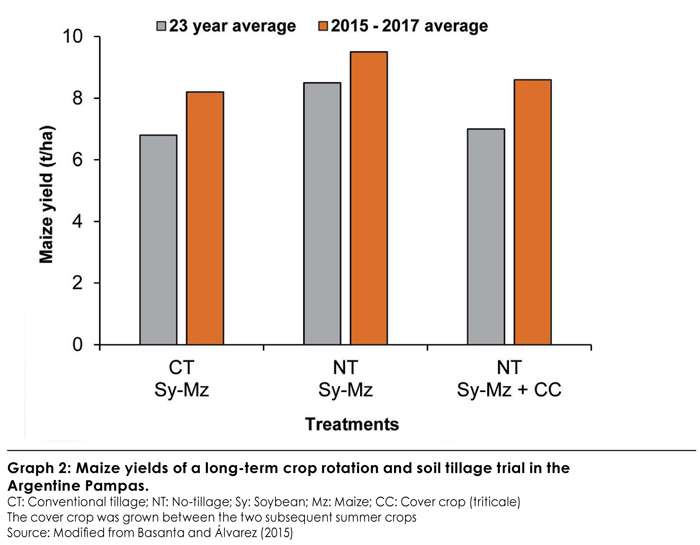 It is important to acknowledge the contribution of a cover crop to the functioning of the cropping system. Instead of a fallow period with very low soil cover, the growing cover crop provide valuable grazing material, through which value is added to the livestock. The live roots during the winter season provide carbon sources for soil microbes, which may enhance organic matter build-up over several years.

The soil surface is protected from direct sunlight and wind erosion, while good cover is present at the offset of the rainy season and planting season. In regions where mulch cover build-up is a challenge, cover crops can be used as a tool to enhance this critical factor, as illustrated in Graph 3. The average contribution in biomass production (in addition to crop residues of the previous summer crop) by triticale was 3,1 t/ha and 2,3 t/ha in the soybean-maize and soybean-soybean crop rotation, respectively. 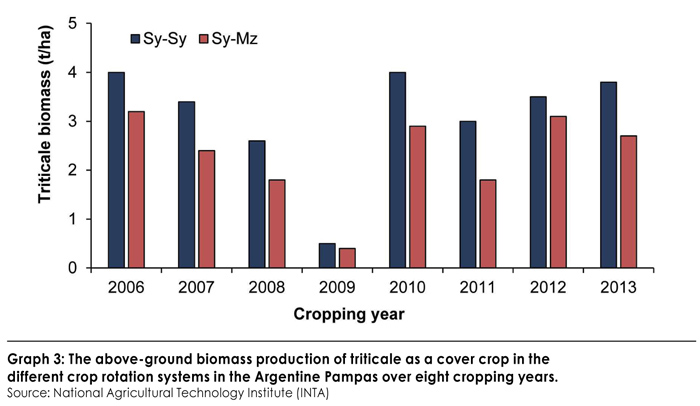 Tools for integrated pest management in the Argentine Pampas include:

By combining these management tools and applying them in accordance with pest growth cycles, crop losses may be lowered. As an example, cutworms’ life cycle finishes close to the time of maize planting in the Argentine Pampas. Therefore, producers extend maize planting dates in combination with chemical control to lower potential damage to maize seedlings.

Final remarks
The challenges faced within a cropping system need to be addressed by using a unique set of management tools available to the producer. By investigating climate conditions and the soil water and fertility status, producers can gather information to consider possible management strategies.

Using this as a point of departure, soils and plants can be managed accordingly, using multi-ecosystem services as a way to produce crops in a profitable and sustainable manner in the long run.

Mentoring is a great way to keep learning