While some grain producers are harvesting and others are watching the weather for rain, there are quite a few tectonic plates that are moving and shifting. Due to COVID-19 all the shifts are not always that visible, yet they have major implications for agriculture.

Now that South Africa seems to have enough food and the shelves remain full for those who still have a job and those who can buy, the government is busy devising plans. However, there are two groups of planners. The first group wants to kickstart the economy to get it growing. Then there is a second group who wants to use the opportunity to get better positions, probably to continue with the devastating pillaging that we suffered a total overdose of at the Zondo commission before COVID-19.

The Agriculture and Agro-processing Master Plan (AAMP) process isn’t going smoothly. This is yet another new plan that envisages inclusive growth. The process is not really making any headway and those who have to drive it from the government’s side have already been changed once. Large groups of people are involved to provide input, many of whom are unfamiliar with agriculture. Yet they have quite strong opinions regarding agriculture and especially politics as well. 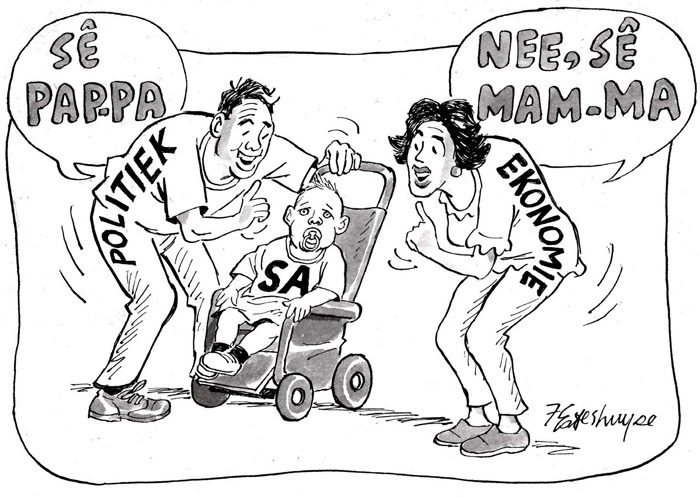 Well-known organised agriculture structures are being marginalised. There have also been certain court rulings regarding water rights that form part of the AAMP in the background. Major implications. These days I am also reading people’s opinions on the huge challenge the state will be facing regarding the country’s debt and how to finance it in future. A bailout by the International Monetary Fund (IMF) may have major benefits for the country to get the economy back on track. The conditions they impose will definitely make an issue such as expropriation without compensation a taboo. A smaller civil ser­vice to limit the government’s role in the economy and to make it more affordable, poses huge threats to those who strongly support the current rulers.

The magical middle ground means that we must be able to grow, but in an inclusive way. These two goals in some instances stand opposite each other. This is also where the negotiations will reach a climax in the next two months. It reminds me of the pre-election negotiations of the 1990s. It resulted in political power being handed over on national, provincial and local level (municipalities). However, economic power has more to do with market forces than with politics. It’s a whole different negotiation. It seems to me as if we have now reached the phase in the country’s history where a large part of the negotiations is about economic power.

Failed state-owned enterprises like Eskom, the Land Bank, SAA and others as well as failed municipalities are cold facts that cannot be swept off the table. Their economic performance, even as monopolies, now weighs heavily against them. If this is going to be any indication of what the economy will look like at the end of this part of our history, South Africa will probably need more than the IMF to rescue us. We don’t want to go there. The sounds of poverty and hardship coming from countries to the north of South Africa are on a totally different level than what we are currently struggling with.

Negotiators will have their work cut out to balance these two goals in the future. They will hopefully stay sober to direct the facts and emotions in such a way that we can continue to pride ourselves on the best producers in the world and on being a country that has growth and food security.