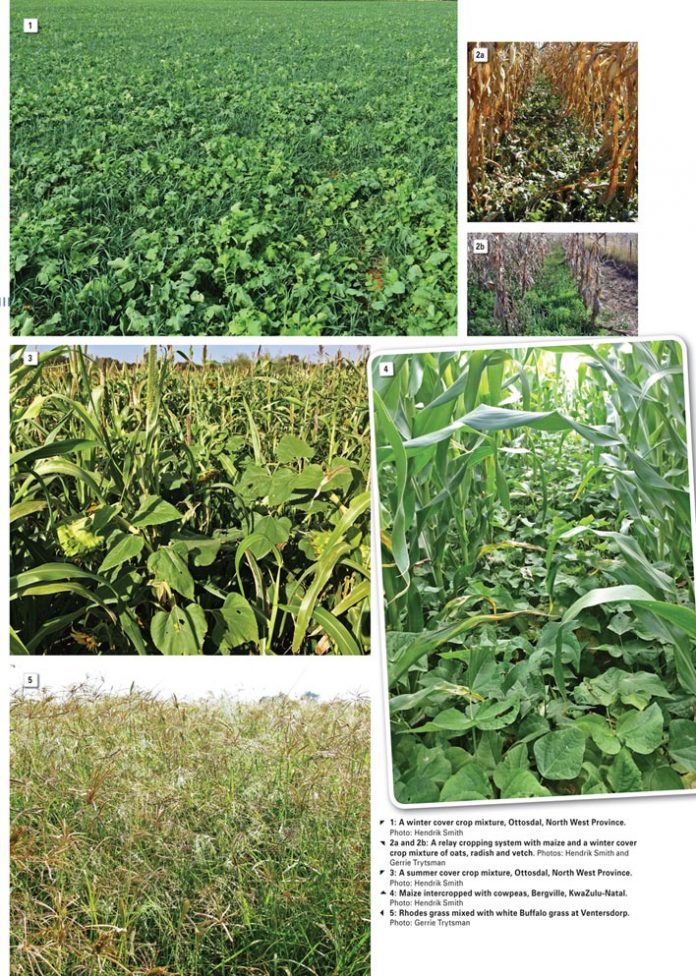 This article is the 26th and final of a series of articles highlighting crop species that can play an imperative role in conservation agriculture (CA)-based crop-pasture rotations. Besides improving the physical, chemical, hydrological and biological properties of the soil, such species, including annual or perennial cover crops, can successfully be used as animal feed.

Livestock production systems are in many ways dependent on the utilisation of forage species, or pasture ley and cover crops (used interchangeably in this article), and can therefore become an integral component of CA-based crop-pasture rotations.

To qualify as a pasture ley crop, a plant species must fulfil the requirements of a dual purpose crop, i.e. it must be functional for livestock fodder and for soil restoration. This article concludes the series and focuses on the way these different species can be incorporated into cropping systems as ‘pasture ley’ crops.

The term ‘pasture ley’ can include a variety of annual or perennial species, legumes, grasses or root forage crops used in short or long-term rotations. It is therefore important to distinguish between a short term and long term ley cropping system.

With the declining fertility and productive capacity of many South African cropping soils, there is an increasing need to develop successful ley pasture systems in grain producing regions. Ley pastures in crop rotations have the ability to reverse declining soil health and various properties, improve livestock productivity and reduce rising environmental problems.

The past series of articles on different species have highlighted the important benefits of such species as an integral part of croplivestock CA systems. These benefits include: Improved nutrient cycling and soil biodiversity, reduced erosion, compaction and nutrient leaching, improved soil aeration and water conservation, increased carbon sequestration and storage.

It is however important to understand the attributes of the different ley pasture species, as the wrong combination of species can lead to negative effects on succeeding crops. Legume pasture ley crops are most commonly used for nitrogen contribution because of their ability to fixate nitrogen to be used by a following crop. Grass ley crops are more widely used to control soil erosion, to control weeds, improve nutrient recycling and carbon sequestration and to improve soil structure as a result of soil compaction.

Brassicas are used to reduce compaction and increase soil structure through increased levels of organic matter, recycle nutrients and to suppress diseases and weeds.

The following section provides information about different ley or cover crops grown during, in-between or after cash crops. Emphasis is given to the summer rainfall area of South Africa. These crops should preferably be planted as multi-species mixture and utilised through mob grazing, or short-duration, high-intensity grazing. The ideal is to have a diversity of living roots in the soil for the entire year to boost soil health.

After maize or soybeans, or late in growing season (as a winter cover crop or relay crop)
Cereal rye, annual ryegrass, wheat, oats or triticale as grasses can be planted to accumulate soil organic matter, recycle nutrients, and reduce soil compaction (see Photo 1).

Brassicas (oilseed or tillage radish or turnips) is used to recycle nutrients, reduce compaction, and promote weed and disease suppression. Vetch can be planted as a nitrogen source. Relay cropping is the technique of seeding these winter cover crops into a maize crop. The cover crops germinate and grow slowly under the maize canopy (see Photo 2a and Photo 2b).

When the maize is harvested in the fall or winter, the cover crops are already established and growth resumes, saving valuable time. Generally, the relay crop will have far more growth throughout the winter and spring, than will any cover crop seeded after maize harvest.

Apart from the advantage for livestock integration, there are many other economic and environmental benefits.

During growing season, in-between cash crops (as summer pasture ley fallow)
Crops such as babala, forage sorghum, cowpea, soybeans, mung beans, dolichos lablab, velvet bean, sun hemp and jack bean can be used. These multi-specie systems should preferably be grazed twice in the growing season, once in early summer to maximise root growth (five times more root growth after first grazing) and once in late summer to increase organic matter decomposition (see Photo 3). If required, crop growth could be terminated with herbicides or with a knife roller. Time of termination depends on the need to store or conserve soil water for the next crop.

During growing season, simultaneously with maize (as intercrop)
Non-climbers (such as cowpea, mucuna or velvet bean) or climbers (dolichos lablab and velvet bean) can be sown two to eight weeks after planting maize. Later plantings have less impact on maize yield, however. The earlier the ley crops are sown, the greater the soil protection and weed suppression obtained.

In smallholder systems, intercrops are also planted as food source, such as dry beans or cowpeas, which residues could also be used for animal feed (see Photo 4).

A suite of cover crops are available for producers to plant for a specific purpose and can include the following (species listed are not limited and other options do exist): 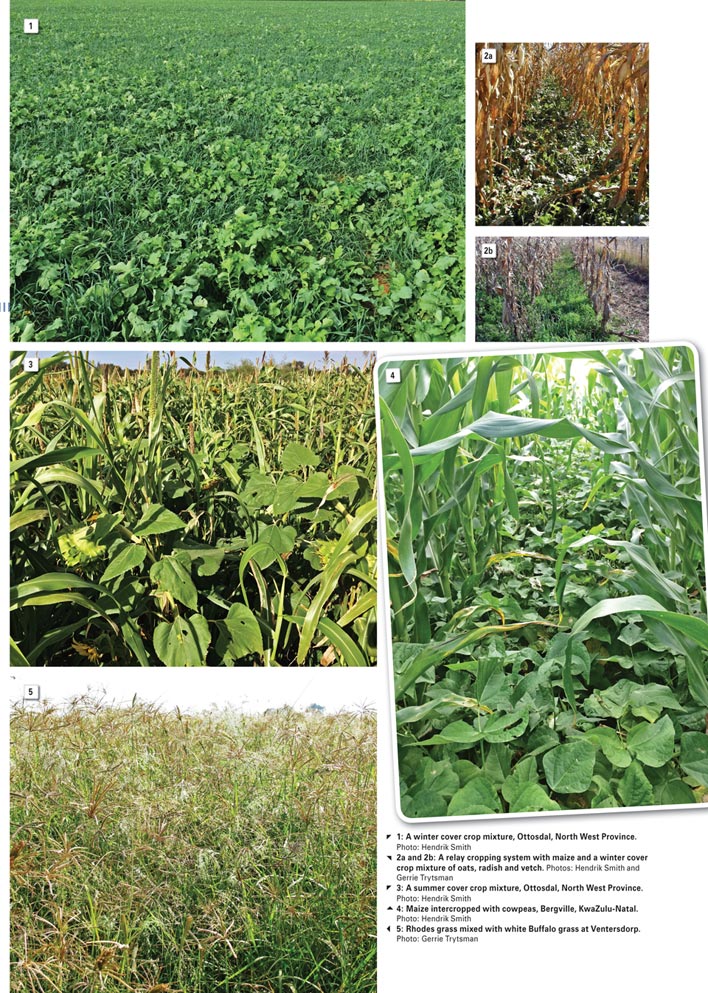 In general, legumes need P for N fixation but are unfortunately poor users of P in the soil. Since legumes can contribute to soil acidification, it can result in P becoming more available when P is fixed and limiting.

In general, grass cover crops store and supply more P than legumes because they have a finer root system and more surface area than legumes with a taproot. In mixed legume-grass pastures, the legume cycles N to the grass and the grass cycles P to the legume.

Table 1 shows an overview of the major pasture ley species that serve as forage for animals (cattle, pigs, sheep, chickens and fish). 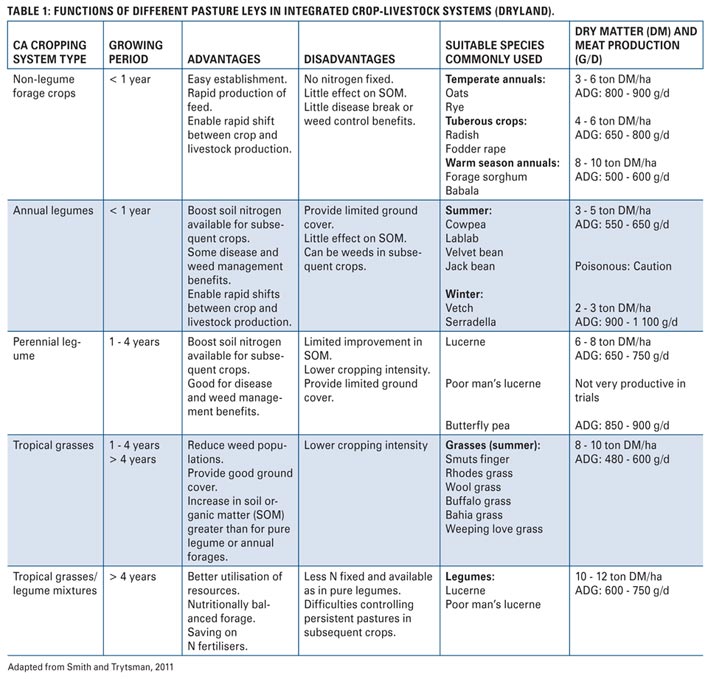