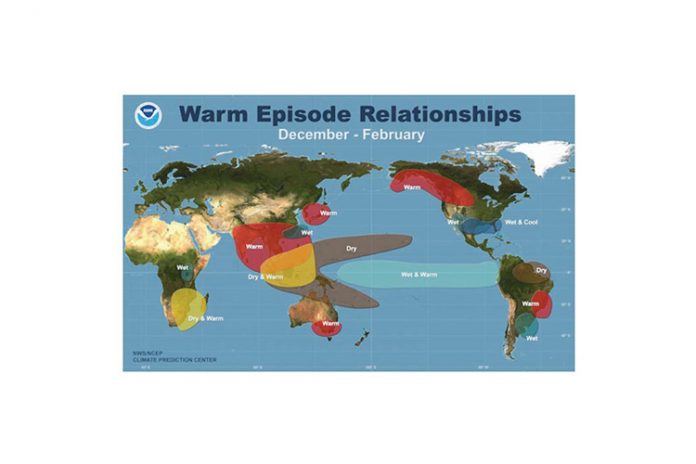 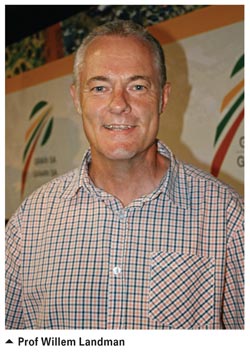 Can you, first of all, cope with variability? It is important to understand that there is a difference between climate change and climate variability.  Climate variability (veranderlikheid) has always been present and is part ofthe natural order. It describes year to year changes.

Without doubt the climate is becoming warmer and the next few decades will become warmer still. This is of great concern and we need to attend to this matter for the sake of the future.

The synoptic chart (Figure 1) depicts typical El Niño conditions. The mid-summer rainfall pattern can be seen across the globe.

The effect is not the same everywhere and there is also no sign of El Niño in many parts of the world.

El Niño (The Son – refers to the birth of Christ) has a significant impact on farming in southern Africa and forces abnormal warm, dry conditions while in Equatorial East Africa it is much cooler and wetter. 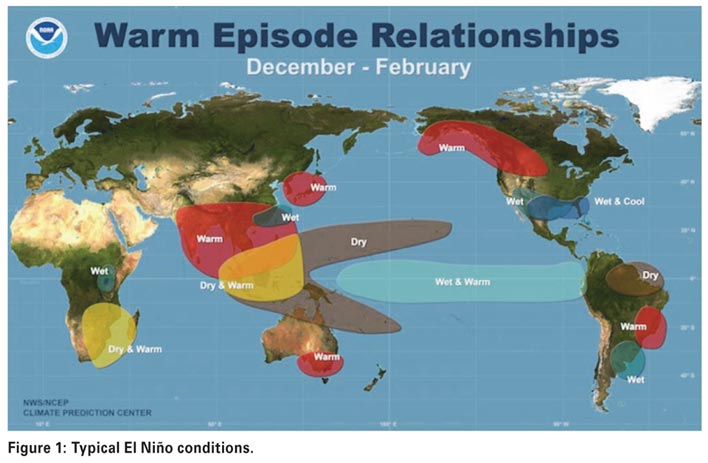 La Niña (The Daughter) describes opposite conditions. Predictions are made by looking at historic patterns and these predictions have proven to be very reliable. In August 2015 climatologists were already predicting the high likelihood of an El Niño phenomenon. Our models actually slightly underestimated the intensity compared to what eventually did realise early in 2016. The actual recorded temperatures (see Graph 1) indicate that this El Niño is the strongest yet observed. 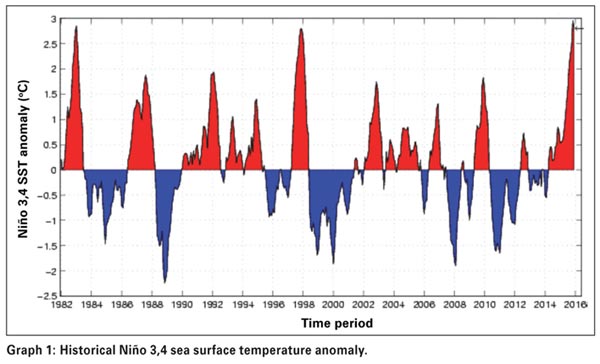 Looking to the future, Landman adds that climatologists cannot make deterministic statements, but rather suggest probabilities.

Currently the chances of La Niña seem to be increasing but there is no certainty at present. Winter needs to begin (earliest May) before there can be any confidence in predictions of either a strong El Niño or La Niña system arising.

Looking at different models and correlation charts (Spearman’s correlation) between the observed and the actual measured results for regions where there is an appearance of these systems, e.g. the results for the Philippines have proved most accurate while South Africa’s seasonal prediction ability is limited.

So what about climate change?

Models have been drawn up where observing only natural forcings (influences on climate)  have been compared to models using both natural and anthropogenic (caused by human activity) forcings. It is clear that human activity is certainly contributing to the dilemma of climate change. We have to address this problem by changing our behaviour patterns.

Temperatures are projected to rise significantly (Graph 2). It appears there will however not be significant changes in precipitation levels although the trend will be towards drier conditions. The consequence will certainly be shifts in production area and reduced yields (Graph 3).

Finally Landman says there is a greater need for co-operation between role-players towards the co-production of data which will contribute to more useful scenario projections for the future from all stakeholders in the agricultural sector.