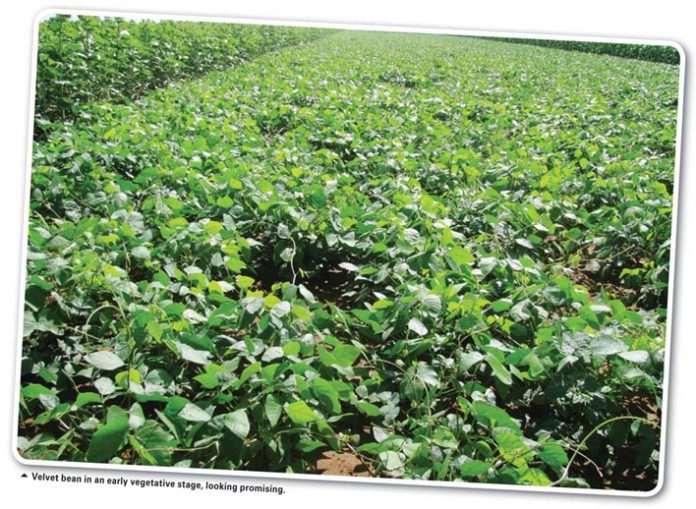 This article is the 21st of a series of articles highlighting a specific pasture crop species that can play an imperative role in conservation agriculture (CA)-based crop-pasture rotations.

Besides improving the physical, chemical, hydrological and biological properties of the soil, such species, including annual or perennial cover crops, can successfully be used as animal feed.

Livestock production systems are in many ways dependant on the utilisation of pasture species, in this case as a pasture ley crop, and can therefore become an integral component of CA-based croppasture rotations.

It is imperative to identify a plant species fulfilling the requirements of a dual purpose crop, i.e. for livestock fodder and/or soil restoration. This article focuses on a cover crop with pasture crop potential used to improve soil conditions and to provide a high quality grazing for ruminants.

Velvet bean is a twining, annual legume that can reach 7 m in length. There are two common varieties M. pruriens var. pruriens and var. utilis. This species is a very well-known green manure and cover crop.

Velvet bean is very vigorous and its growth suppresses companion species. If velvet bean is grown in intercropping system, it should preferably be sown at least 45 days after the other crop – especially a crop such as maize – to overcome interspecies competition. 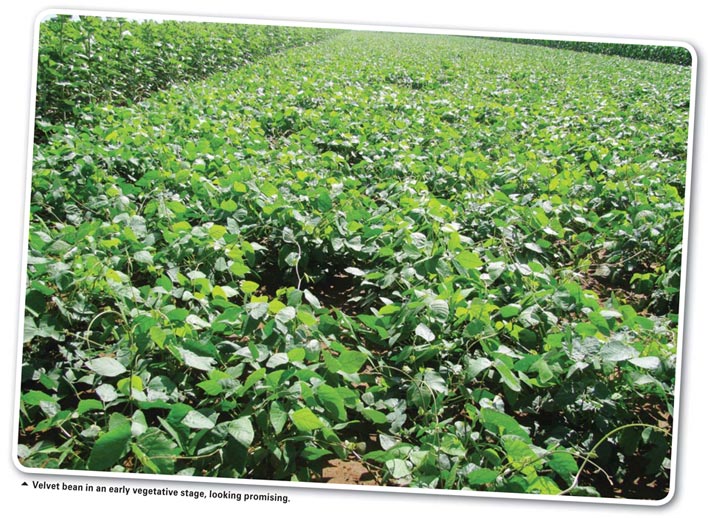 Mucuna pruriens can either be sub-tropical or tropical. This species is known to grow in many different habitats which include pastures, forest edges, roadsides, riverbanks or even woodlands. M. pruriens can adapt to well-drained sandy soils as well as clay soils.

This species is not drought tolerant since it has a shallow root system, and is also known to not tolerate waterlogged conditions. Velvet bean requires a long growing season and is sensitive to frost and therefore requires at least 180 frost free days. Since the species does not succeed on cold, wet soils, when grown as a crop it should not be planted before the soil has reached warm temperatures.

Since velvet bean cannot tolerate temperatures below 5oC, temperatures of 20oC – 30oC are recommended during the growing season. An ideal soil pH to grow velvet bean successfully is 5 – 6,5 on light, sandy loam soils. M. pruriens is adaptable to a wide rainfall range as low as 400 mm – > 1 200 mm.

Mucuna pruriens is known to be a common forage crop with great value. This species is known for its amazing weed control abilities. The most common use of velvet bean is as a cover crop and green manure.

It has been widely used to reclaim land that has been infested with weeds. When planting velvet bean, it does not require a high degree of land preparation. The best method to plant velvet bean is by drilling it into the soil with about 1 m between rows and 20 cm – 80 cm between plants (20 kg/ha – 40 kg/ha seed). Seeds are large, so seeding depth can be as deep as 10 cm but not less than 3 cm. Seed does not require scarification or inoculation with rhizobia prior to planting.

This species has also frequently been intercropped with maize and left to grow after maize has been harvested to maintain and increase the soil’s fertility before establishing the following season’s crop. There are two options to manage velvet bean in such a situation and that is to incorporate it just before the next planting season, or partially graze it together with some maize residues to sustain ruminants through the dry winter season in a subtropical area.

Velvet bean has a high dry matter production for a subtropical legume. Yields range from 5 t/ha – 13 t/ha depending on the rainfall. As it is known that soil phosphorus (P) is an important growth element for legumes, velvet bean can produce high yields even in marginal soils that have a low available P value. 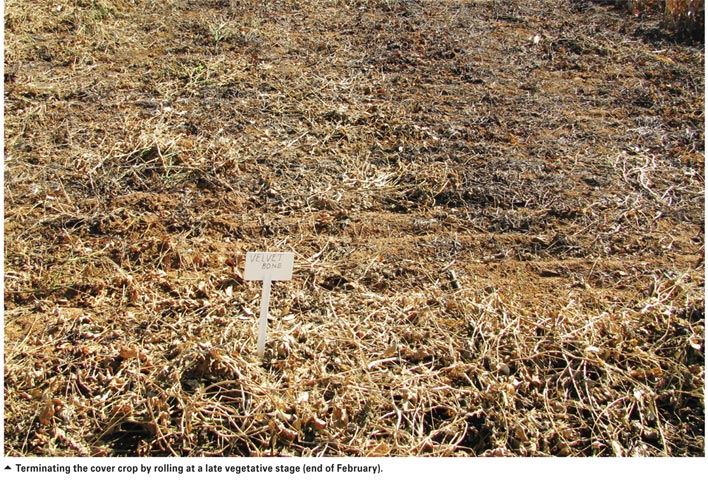 Velvet bean has proven to be resistant to the attack of certain pests and diseases due to its content of toxic secondary metabolites, which gives this species the ability to outcompete weeds. Research has shown a significant increase in organic matter when velvet bean biomass was incorporated into the soil. The soil moisture content also increased by 20% to 30%, and showed a higher cation exchange capacity, lower pH, lower apparent density and a reduction in micronutrient recycling.

At the same time, with the use of M. pruriens, reductions in the damage and mortality caused by Pythium, Rhizoctonia and Fusarium on maize seedlings have been documented, probably due to the type of organic matter that is incorporated into the soil, and the effects of this on the soil’s microclimate and/or its allelopathic effects (Versteeg & Koudokpon, 1990). 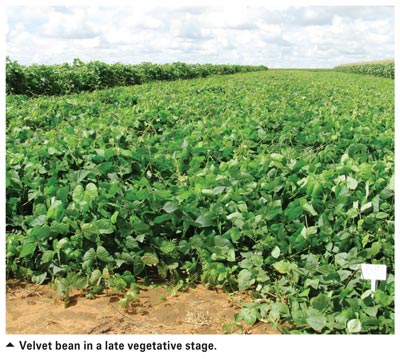 Although velvet bean is used to control weeds in agricultural settings, it is an invasive species and can negatively impact on environments outside of cultivation. Some agronomic disadvantages of velvet bean include:

When a legume such as M. pruriens is grown in association or is intercropped with maize, a reduction in maize yield often occurs during the first cycle. The severity of such reduction depends on the legume species as well as its density and management.

Soil nitrogen losses through leaching and volatilisation have been recorded in research projects, because of the absence of a crop able to absorb the nitrogen being released through decomposition – the immobilisation of nitrogen at the same time when the crop has the highest demand for this nutrient.

Despite velvet bean being such a useful forage crop, the seeds can often be toxic to mammals, with reported cases in pigs. This fairly high-protein fodder (greens and pods) can be eaten by most livestock, except pigs and chickens, since the seeds contain an anti-nutritional factor that will retard the growth of non-ruminants. 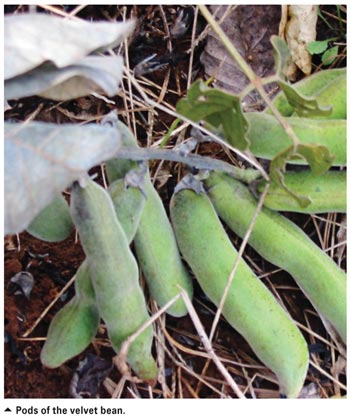 Depending on the stage of maturity, the crude protein content of the dry matter foliage is between 10% – 25% and 20% – 35% in the grain. Velvet bean has a digestibility of 60% – 65%. Many reports have indicated that M. pruriens can have either a low palatability or an extremely high palatability, and this is often related to the climatic conditions in which it is grown, further affected by the way it is managed and utilised.

After consulting literature, we can conclude that Mucuna pruriens will increase the functional properties of an agro-ecosystem, whichwill increase its productivity through the biocontrol of weeds anddiseases in addition to the incorporation of organic matter (OM) andN into the soil.

Velvet bean has also shown that soil biota can be improved, and when soil properties change, soil moisture and temperature will be regulated better and soil will be protected from erosion and ultimately better intercropped grain harvests can be achieved. Alternatively, when velvet bean is being used as a cover crop, it can be partially grazed by ruminants during the drier season to sustain their growth.

‘My maize helps to eliminate hunger’