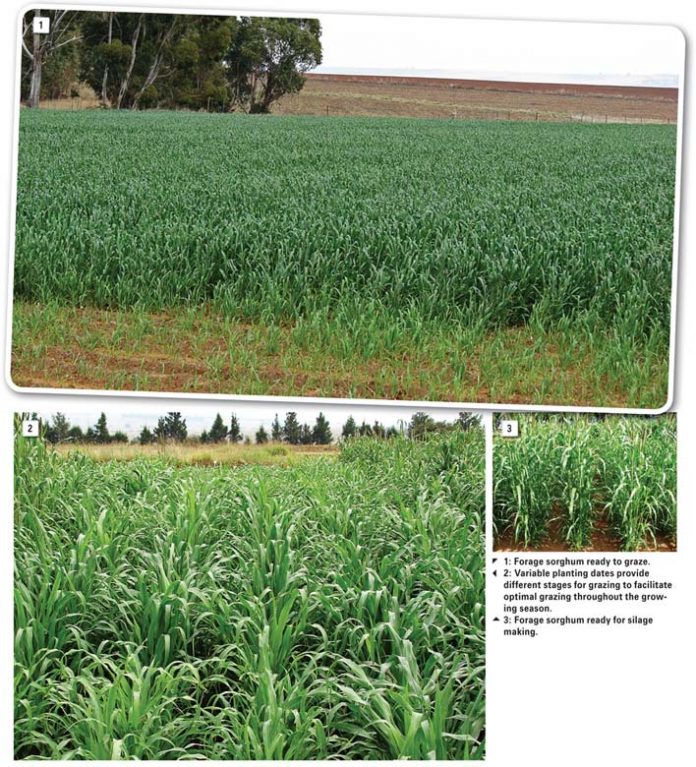 This article is the eleventh in a series of articles highlighting a specific pasture crop species that can play an imperative role in conservation agriculture (CA) based crop-pasture rotations.

Besides improving the physical, chemical, hydrological and biological properties of the soil, such species, including annual or perennial cover crops, can successfully be used as animal feed.

This article focuses on an annual pasture crop commonly used in a short one summer season rotation as a cover crop either succeeding a winter annual species cover crop with green manuring properties or either being succeeded by the latter crop mentioned.

Fodder crops are sometimes classified as expensive, because of the annual seedbed preparation and establishment. However, the higher production and palatability of forage sorghum cultivars challenge this statement.

The value of forage sorghums are because they are easy to establish, fast growing and high yielding, palatable summer annual and perennials. Forage sorghums are generally more palatable and nutritious than babala. They have the ability to recover well from defoliation and respond extremely well to fertilisers. 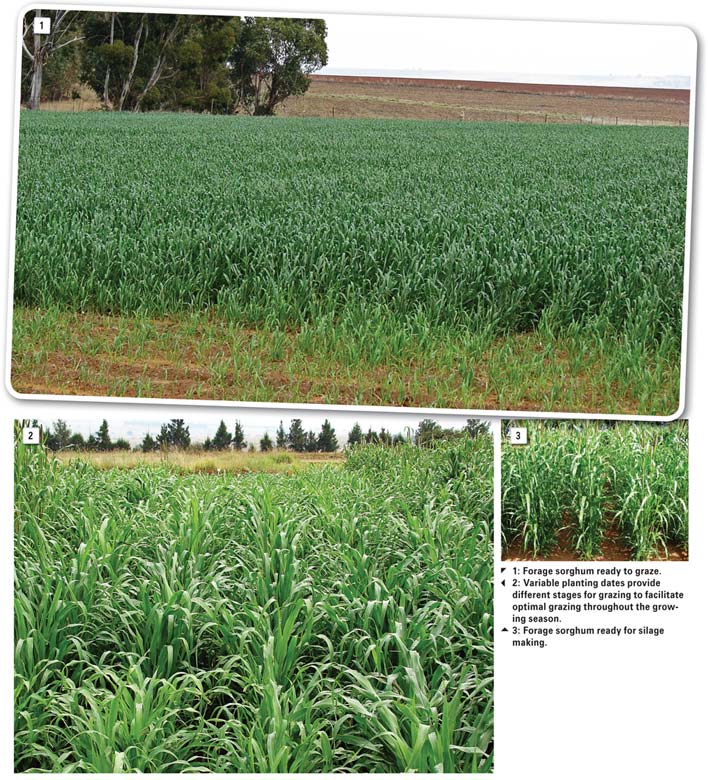 These are normally hybrids of crosses between different sorghum types and/or Sudan grass. These hybrids can often have many characteristics which make this species suitable for silage, grazing or even hay.

The annual sorghum is the most commonly planted sorghum. There are however numerous cultivars available each year commercially, and it varies from year to year. This often makes it difficult for the producer to select the most suitable cultivar for his requirements.

These sorghum species can survive between three to five years, all depending on the climate as well as the row spacing in which they are planted. It is also known that the persistence of these species is easily affected by incorrect management practices, especially in low rainfall areas.

Sorghums are well-adapted to regions that do not necessarily have a high rainfall. It can be stated that a rainfall of between 400 mm – 650 mm is more that acceptable for normal production of sorghum. This however, does not restrict their use in higher rainfall areas and/or irrigated land.

The species are very adaptable to a wide range of soil types, but mostly cropped on lower potential soils and are very tolerable of higher levels of salt or alkali. This emphasises their ability to adapt to their growing conditions easily. Sorghum species are more adapted to warmer than cooler climates.

The best possible time to seed forage sorghum is preferably once the spring rains have arrived. The establishment period is thus any time between October and January all depending on the amount of rain received.

If the sorghum is to be used for grazing purposes, it is however recommended that the planting is spread over the planting period, this way optimum utilisation of the available grazing is achieved. It is suggested that the sowing density be determined by the soil type and quality and then ultimately the expected rainfall.

It is advised that sorghum is planted in rows under dryland conditions, and row spacing should be widened according to the dryness of the area. With these seeding conditions in mind, seeding rates can vary between 5 kg/ha – 20 kg/ha. General recommendations for annuals are 7 kg/ha – 10 kg/ha in rows, or 15 kg/ha – 20 kg/ha broadcasted. Perennials are sown at the rate of 12 kg/ha – 15 kg/ha broadcasted and 5 kg/ha – 7 kg/ha in rows.

Soil fertility is an important factor in the optimal production of sorghums, irrespective of their ability to survive in infertile soils. To achieve good production it is essential to maintain soil P levels at 15 mg P/kg soil. As a guideline 15 kg N/ha can be applied at planting, and subsequent top dressings will be determined by the availability of rain and the level of production required.

Top dressings of 35 kg N/ha can be applied once or twice throughout the season. If the crop is grazed it is less important to fertilise with potassium (K), as this element is returned back to the soil via dung. If the crop is used for silage, significant amounts of K are removed and will need to be returned through fertilisation.

The utilisation of forage sorghum is often challenging, as it has an exponential growth rate and to optimally utilise the quality thereof, it is required to graze it at a height of 30 cm – 60 cm and maintain it at that height to be able to control the growth.

The latter reiterates the recommendation to plant smaller areas at intervals over a period to avoid having all the pasture ready for grazing at the same time. The opportunity also exists to make silage with the excess growth that the animals are unable to graze in time. To ensure good regrowth, the pasture should never be grazed or harvested shorter than 15 cm in height. A combination of rotational grazing and mechanical harvesting should be used to optimally utilise this pasture.

The most significant challenge that is faced with forage sorghums is the high levels of prussic acid or hydrocyanic acid (HCN) they contain. A high risk exist for livestock to experience some form of prussic (cyanide) poisoning if the animals ingest either new growth or regrowth of plants soon after harvesting or when the plant growth is stunted by frost or drought.

The levels of prussic acid vary in different sorghum species and varieties. One of the main objectives of breeding new cultivars is to reduce the HCN content of these plants.

This species can also provide an affordable on-site management option to enhance the inherent soil organic matter through an extremely vigorous root system, and secondly a suitable option to dry out very wet soils that are regularly irrigated either in winter or summer.

This high yielding, fast growing, annual pasture species can produce up to 13 tons of dry matter (DM) per hectare. Research has shown that the grazing capacity for a well-managed (fertilised and grazed) forage sorghum pasture can be between 5 LSU/ ha – 10 LSU/ ha for approximately 100 days with an average daily gain of 0,73 kg/day – 1,05 kg/day. The crude protein yield of the pasture can vary between 90 g/kg – 150 g/kg DM, all depending on the level of fertilisation and rainfall.

It can be established in a pure stand or in a mixture with other (cover) crops or as a full season crop to maximise its beneficial properties. Forage sorghum can be used for a short period of time in the spring before the cash crop or later in the fall after a main crop has been harvested. In South Africa where crop rotations are mostly very tight, it is often easier to insert a fall cover crop after the harvest of a short season, cash crop or silage, provided there is enough time, nutrients and soil water for it to establish before early fall frosts.

In certain situations an annual cold season legume (or mixture) could be planted directly after termination of the cover crop, such as grazing vetch (Vicia villosa), oats and radish, followed by a cash crop. After killing the cover crop, weeds in the fallow must be controlled to conserve soil water to maximise the benefit of the cover crop. A suitable no-till planter should be used to plant the grain crops directly into the residues of the cover crop, without any other cultivation practice disturbing the soil.

Normal integrated fertiliser (based on soil fertility levels and yield targets), weed and pest control practices should be followed. During the transformation phase after newly established CA grain fields (e.g. during the first few years), a 30% increase in N fertilisers is recommended on maize, due to the immobilisation of N in the soil.

Thereafter the availability of N to the plant should be assessed through an appropriate analysis, and fertiliser application should be adjusted accordingly.

Integrated livestock production systems can benefit enormously from such a high yielding, fast growing pasture crop. Its low input requirement and ability to adapt to a wide range of conditions, makes this species highly attractive.

Forage sorghum is a good forage crop to use in rotation with other grain crops. If it is not used intensively for silage production for example, but rather extensively as an interim crop for grazing, soil nutrient replenishment will take place.

It is always important to recognise that a pasture ley crop’s economic value, irrespective if it is a perennial or annual species, is not visual in monetary terms, as is the case with a cash crop. Its value is rather seen in a saving, i.e. lower requirement for weed control, an inexpensive source of good quality roughage to be converted to animal protein, and subsequently a recycled source of nutrients at a very low cost.

Lastly, this crop with its high growth rate and yield is indicative of a significant amount of organic matter returned back to the soil through root biomass.