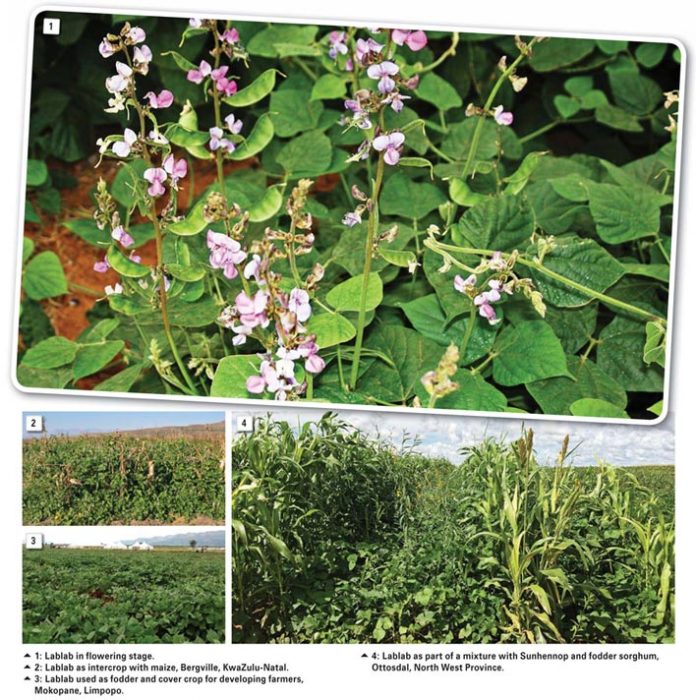 This article is the 20th in a series of articles highlighting a specific pasture crop species that can play an imperative role in conservation agriculture (CA) based crop-pasture rotations. Besides improving the physical, chemical, hydrological and biological properties of the soil, such species, including annual or perennial cover crops, can successfully be used as animal feed.

Livestock production systems are in many ways dependant on the utilisation of pasture species, in this case as an annual legume cover crop, and can therefore become an integral component of CA-based crop-pasture rotations.

It is imperative to identify a pasture species fulfilling the requirements of a dual purpose crop, i.e. for livestock fodder and/or soil restoration. This article focuses on a cover crop with enormous pasture crop potential used to improve soil conditions and to provide good grazing for ruminants.

Dolichos lablab is an annual legume, biennial or short-lived perennial (depending on the ecological zone where planted) with flowers ranging in colour from white to purple, cultivated for human food, livestock fodder or as a green manure cover crop.

If not overgrazed, it can become a biennial. Lablab is an extremely valuable protein source for human and animal feed. This legume improves soil fertility through a process of nitrogen (N) fixation as a result of the symbiotic relationship between the plant and soil Rhizobium bacteria.

Lablab is also well-known as a cover crop to be rotated with other crops. This crop is rich in minerals, especially phosphorus and calcium and vitamins A and D. 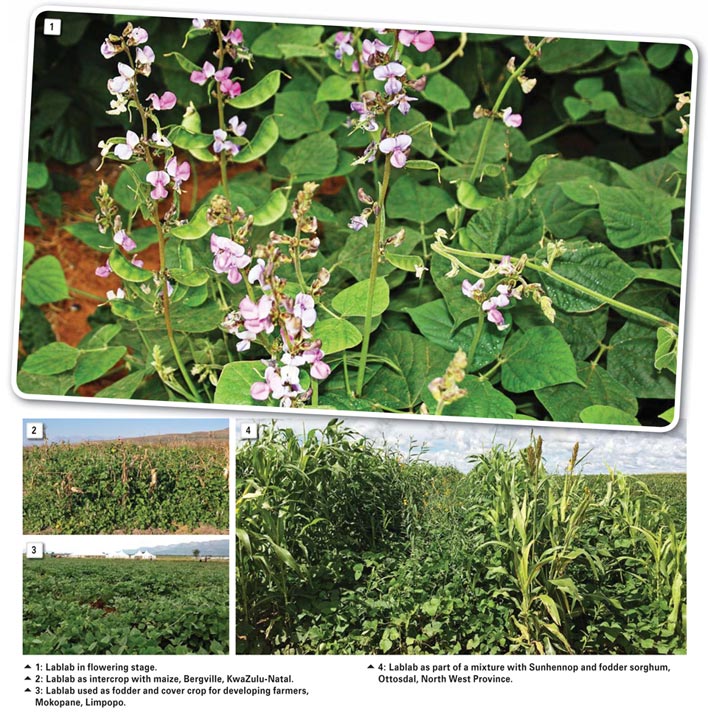 Lablab is adapted to warm, humid climates with a rainfall of 450 mm – 1 200 mm. What makes this crop attractive is that it can be drought tolerant when established and can grow in less than 500 mm precipitation per annum. However, during such times of drought, it can be expected that the plant will lose many leaves.

This crop has a deep root system and can extract water as deep as 2 m in heavy textured soils. This legume is also known to tolerate short periods of flooding unless the soil is not well-drained and root systems are flooded for prolonged periods.

Lablab can survive high temperatures and grows best when temperatures range between 15°C – 30°C. It has the ability to sustain growth at very low temperatures, but not for too long, and can be damaged by frost. This species provides its value in autumn offering valuable feed between summer and winter seasons.

Regarding the soil requirements most suitable for the growth of lablab, it is interesting to note that this crop grows in a wide range of soils, from deep sands to heavy clay soils. The most important factor to consider with any soil, is that it needs to be well-drained and even though lablab grows well on acidic soils, the soil pH should preferably not be lower than 4,5 and higher than 7,5.

When considering the soil microbiology required for effective nodulation for nitrogen fixation, it has been shown that lablab does not nodulate well with native strains of rhizobia and remains important to use the most appropriate rhizobia strain for lablab.

Generally it is most important to have a fine seedbed for smaller seed species, however, lablab has a large seed and a fine seedbed is not a major requirement. It is advised that this crop be planted in rows and preferably with a spacing of 30 cm apart in the row and 45 cm between rows.

Seeds can be planted as deep as 5 cm and covered properly. An acceptable seeding rate is 25 kg/ha. For fodder and grazing 15 kg/ha – 20 kg/ha seed can be planted in rows during October/ November.

It is extremely important to inoculate the seed properly before planting. As a legume species no nitrogen fertiliser is required; however, a small amount at planting can support the initial root system until the nodulation process is fully functional to ensure nitrogen fixation. Lablab is known to have a good disease resistance and is not easily attacked by insects. This legume crop can be conserved into hay or silage, and can be fed as green feed in moderate amounts to cattle as a legume supplement with high protein content.

It can provide a late season grazing and is most compatible with maize or forage sorghum when intercropped. If harvested for fodder purposes, it should be harvested just prior to the flowering stage and when cut, it is essential to leave sufficient stubble at a height of 10 cm – 15 cm to ensure optimal regrowth.

Lablab is well-known for its significant nitrogen contribution to soils via nitrogen fixation and large amounts of nitrogen from decomposed leaf material. Improved soil fertility is therefore evident when lablab is used as a cover crop or as a green manure crop in a cereal intercropping system as a legume ley crop.

It is generally known that lablab’s early growth is slow and should not be subjected to weed competition after establishment. Research has shown that lablab roots have also been susceptible to nematode attacks and that the plant can also be attacked by leaf eating insects.

With regards to soil medium restrictions, salinity has proven to have an adverse effect on the growth of this legume. Since this plant has a high affinity to high temperatures, it only really grows rapidly when temperatures exceed 29°C with growth ceasing at temperatures below 3°C.

Regarding extreme climatic conditions, lablab has a low tolerance for frost, especially because this plant can seed late. This subsequently affects the quality of the plant since the pods are high in protein and do not develop properly before being frosted off. 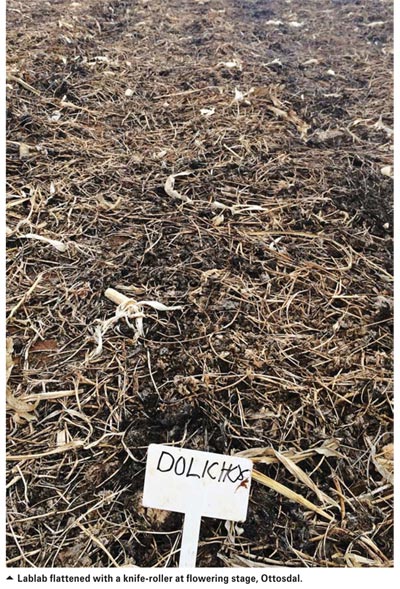 Lablab is suitably used as fodder for cattle, both as hay, silage or as a green feed using a cut and carry system. When lablab is grazed, it is mostly the leaves that get eaten and the stems are left.

Since it is a fast grower it can withstand frequent defoliation under rotational grazing. If grazed leniently, during the first season, it sometimes will act as a biennial and provide good spring and summer grazing the following season. When grazed, it is essential to provide a sufficient recovery period before being grazed again. It can be used in pure stands or in mixtures as green grazing and foggage (mixtures with maize or sorghum silage). It is not a good hay crop in wet areas, due to thick stems that dry slowly.

It is extremely important not to allow hungry animals to only graze lablab as it will surely result in the occurrence of bloating, especially with young regrowth. It is recommended to graze a mixed grass/lablab pasture, or to spray the material with an antibloating agent prior to grazing.

It is also essential to prevent lablab from burning as it does not tolerate fire. Numerous research trials indicate seasonal yields of 2 tons – 6 tons of DM/ha in sub-humid sub-tropics, depending on the specific climatic conditions in which the crop is grown. To date, literature has shown that protein quality differs when the leaf to stem ratio changes and the protein content can range between anything from 8,5% – 24%, depending on the amount of leaf material present.

Lablab can make excellent hay if the leaf is preserved and the stem material is dried properly. It is essential to facilitate the drying of the stem by introducing a curing process through mechanical conditioning (crushing) of the stem material. When making silage from lablab, it is advised to combine it with another crop such as sorghum, as this will increase the protein content of the sorghum mixture. Sorghum can additionally provide sufficient tannins to counteract bloating to some extent.

If the plant biomass is not used by livestock, it can additionally have great value as a green manure crop, especially since this plant has a high amount of leaf drop which decays and contributes to the carbon and nitrogen levels of the soil even before the entire plant is incorporated prior to the seeding of the next grain crop.