The 2019 Potential Commercial Farmer of the Year is Sabatha Ewart Mthethwa from Dannhauser in KwaZulu-Natal. As everyone knows, it takes a team to make a winner and Sabatha has a whole team supporting him – apart from a very loving family, the team from Grain SA’s mentorship programme made sure he realised his potential.

Ghanaian Lailah Gifty Akita, who was also the founder of the Smart Youth Volunteers Foundation, said, ‘Every great achiever is inspired by a great mentor.’ In Sabatha’s case, this mentor has been Chris de Jager, who also mentored Sabatha’s father, the late Remember Mthethwa, a finalist for the 2017 Smallholder Farmer of the Year.

‘The success of one of your mentees is always rewarding, so this is definitely a highlight,’ says Chris. ‘Sabatha is hard-working and his success is a result of the foundation that his father laid. He is following in the footsteps of a man who was a farmer at heart.’

This passionate mentor is, however, proud of every one of his farmers achieving success – no matter how small – as it shows that they are taking to heart what is discussed at the study group meetings. ‘I thoroughly enjoy the time I spend with the farmers, and it seems that they are also satisfied with the guidance I am giving them.’

Give what you can
Chris has always believed that although he does not have the finances to make a difference in someone else’s life, he can share what he does have. And in this case, it is his agricultural knowledge.

With more than 40 years’ experience in agriculture, he definitely has enough farming knowledge to share with emerging farmers. He joined a family farming enterprise consisting of beef cattle, sheep, crops and a dairy in 1970. In 1990 the dairy was closed and the enterprise diversified even further by adding a piggery. Because of tremendous losses due to theft, they later also decided that sheep farming was no longer a viable option. 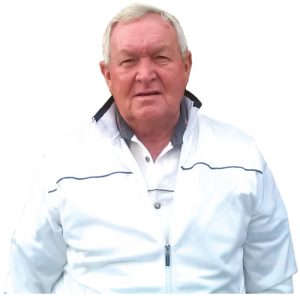 He retired from the family farming business in 2015 and joined an agricultural chemical company, for two years on a part-time basis. Here he assisted with the calibration of agricultural implements and also handled deliveries. Now, however, he is living out his passion to share his knowledge with developing farmers and to help them improve their farming practices and ultimately ensure food security.

Mentoring becomes a way of life
Chris has been involved in assisting emerging farmers for many years and mentions that he really enjoys showing them the ropes. He was approached by Graeme Engelbrecht (development co-ordinator of the Grain SA Farmer Development Programme in KwaZulu-Natal) early in 2016 about becoming involved in the mentorship programme as a training officer. He had the opportunity to present his first course at Diatalawa in the Harrismith area during May 2016.

As mentor, Chris is involved in the Dundee area, where four study groups and four REID (Rural Enterprise and Industrial Development) projects fall under him. This dedicated mentor tries to visit each of these groups on a weekly basis.

Chris knows the problems that farmers in KwaZulu-Natal face from experience. At his study groups he focuses on the following three areas for successful crop farming:

He believes that increased knowledge leads to increased yields. ‘Once the farmers see the difference good agricultural practices make, they are on board and eager to learn more.’ With visible results, there are currently several farmers who would like to become part of the mentorship programme.

Perhaps American author, Tom Williams, best sums up Chris’s point of view, ‘You cannot change people by giving them money. Instead, give them the thing that is hardest to earn: Experience. Possession does not change a person; knowledge does.’

Restore balance in this debate