Home COLUMNS Mentoring is a great way to keep learning

Dulce Ruby, the founder of the blog Soul Traveler, said that the beautiful thing about life is that we will never reach an age where there is nothing left to learn, see or be. Lawrence Luthango (66) agrees with this statement. After retiring as Grain SA provincial co-ordinator in the Eastern Cape region in February 2016 and ensuring that his then successor, Sinelizwi Fakade, knew the ropes, Lawrence decided to take up a new challenge and became one of the mentors in Grain SA’s mentorship programme.

A lifetime of learning about farming
According to Canadian author, Malcolm Gladwell, it takes 10 000 hours to master a new skill. He also believes that people learn best by example and by direct experience as there are real limits to the adequacy of verbal instruction.

Although Grain SA’s mentorship programme has proven that it can take much less time to master a skill, the mentors have all experienced that learning by example and experience bears fruit. With very few of his farmers being literate, Lawrence has seen first-hand that the practical demonstrations are what really interest the groups.

As a mentor he is tasked to relay theoretical and practical training regarding agricultural practices to an enthusiastic group of 109 farmers attending his four study groups. Whilst preparing for the groups, he soon realised that there were many areas where he lacked knowledge. He now believes that it probably takes a lifetime to learn all there is to know about farming.

Lawrence has been involved in Grain SA’s mentorship programme for the past eight years: It formed part of his job description as development co-ordinator of the Grain SA Farmer Development Programme even before he became a fully-fledged mentor in the
Chris Hani District Municipality in the Eastern Cape. 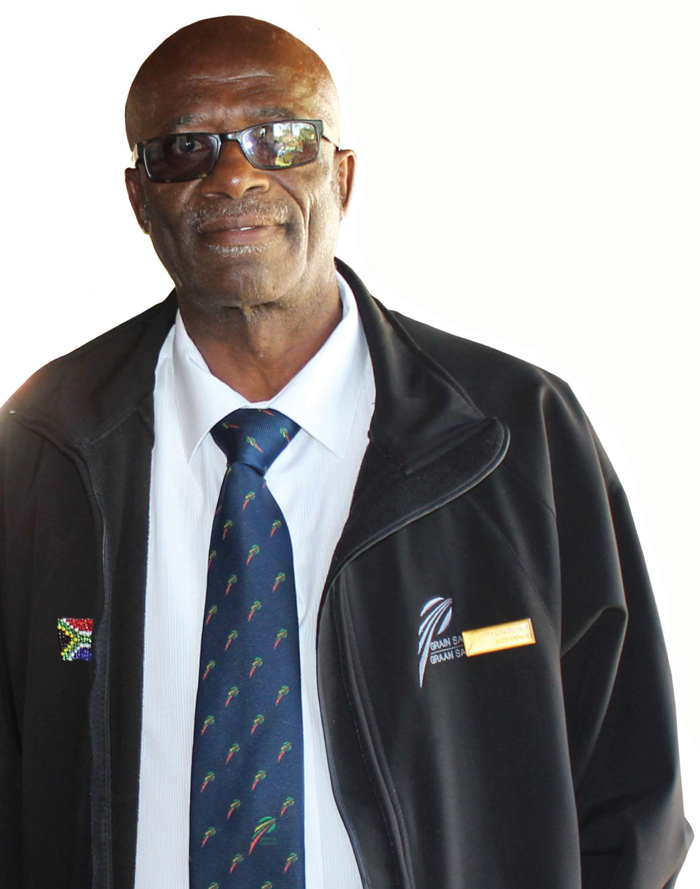 When asked why he decided to stay on as a mentor after his retirement, he answers: ‘Being a mentor, helps me to learn a lot of new things! You can’t teach if you do not learn. I will grow old too quickly if I don’t learn new things.’ With good health on his side he plans to stay involved – and learn – for a few more years.

Old habits die hard, but change is possible
His main responsibility is to train the farmers to understand crop production – from the soil to the table. Farmers attending the study groups all live in a two-kilometre radius from the various venues where they get together for their weekly information session. Here they can share their concerns with each other and get advice.

Most of the farmers are older and set in their ways, believing that it is not necessary to change the methods they have been using. Their tried and tested methods have been putting food on the table for years. While some resist change, others trust their mentor and have been implementing new agricultural practices with Lawrence’s guidance. Their increased yield means more food on the table or more money in the pocket. ‘Once the results are seen, they all become interested and ready to change,’ Lawrence shares.

He has found that soil health has made a huge impact in his area. Taking soil samples, doing soil analyses and then feeding the soil did not make sense to the farmers at the onset. But when they witnessed what lime could do on their land, they came on board quickly. Liming to neutralise the soil for a higher yield has become the number one practice amongst these farmers.

During his regular field visits in season, Lawrence scouts the crops at different stages of growth for insects and any sign of disease on the leaves. He says it is better to identify problems early in order to prevent too much damage to the crops. In this way he also trains the emerging farmers to do the same. ‘Prevention is better than cure and the appropriate fungicide should be applied at the first sign of infection.’

Drought is one of the biggest stumbling blocks in this area – another is mechanisation. ‘More equipment is needed to make life easier for these farmers who work in block systems. Bigger machinery that is better suited for this hardy terrain will really help,’ says Lawrence.

One of the highlights of his time as mentor was when one of his farmers, Daliwonga Nombewu from Mthatha in the Eastern Cape, became the 2015 Grain SA/Syngenta Smallholder Farmer of the Year. He hopes that as his farmers develop a passion for learning more about agriculture, in the future another winner from his area will be crowned at the Day of Celebration.

Wheat: Breeding the future Part 2: Perhaps it is in the...