Wheat rusts are fungal diseases that primarily infect the leaves and stems of wheat. There are three types of rust diseases (stem rust, leaf rust and stripe rust) which commonly occur on wheat worldwide.

All three rust types are found in South Africa although their occurrence and severity largely depend on climatic factors and the susceptibility of the wheat cultivars planted.

Stem rust (Photo 1) and leaf rust (Photo 2) are frequently found in the winter rainfall wheat growing regions such as the Western Cape, whereas stripe rust (Photo 3) is more important in the cooler wheat production areas like the Eastern Free State.

Under favourable weather conditions, virulent strains of these rusts can result in significant yield and quality losses.

Visually distinguish
The three rust types can be distinguished visually based on the signs they produce on infected wheat plants. Stripe rust produces yellow fungal spores arranged in stripes on the leaves. Stem rust appears as dark-red, elliptical masses of spores on infected stems and leaves. Leaf rust signs commonly appear on leaves as a circular brown mass of spores.

Genetic mutation
Such virulent races commonly develop through genetic mutation occurring in local races or through migration from other countries. Rust monitoring is crucial in reducing the negative impact of continually evolving rust pathogens by allowing quick detection of new races and identification of effective resistance sources which may be used in breeding new resistant cultivars.

Over the past three decades, the ARC-Small Grain has been conducting annual rust monitoring (surveys) in which several new rust races were detected and used in resistance breeding. This article summarises the current status of wheat rusts in South Africa based on surveys conducted during the 2018/2019 season.

Leaf rust
Surveys were conducted on rust trap nurseries planted at 22 localities and over 33 commercial wheat fields in the major wheat growing regions of South Africa, including the Free State, KwaZulu-Natal and the Western Cape. Samples of stems and leaves of wheat and triticale infected with rusts were collected from different localities.

Races of the three types of rusts were identified based on their virulence profile on standard differential lines. Varying levels of leaf rust were observed in all trap nurseries at twelve localities in the Western Cape. Over 50% – 80% leaf rust severities were recorded on susceptible entries at certain localities in the Rûens and the Swartland.

Leaf rust infection in producers’ fields was insignificant. In the Free State, trace levels of leaf rust were detected late in the season in only three of eight trap nurseries. Similar to the preceding seasons, a higher incidence and severity of leaf rust was observed in the Western Cape compared to the summer rainfall regions. 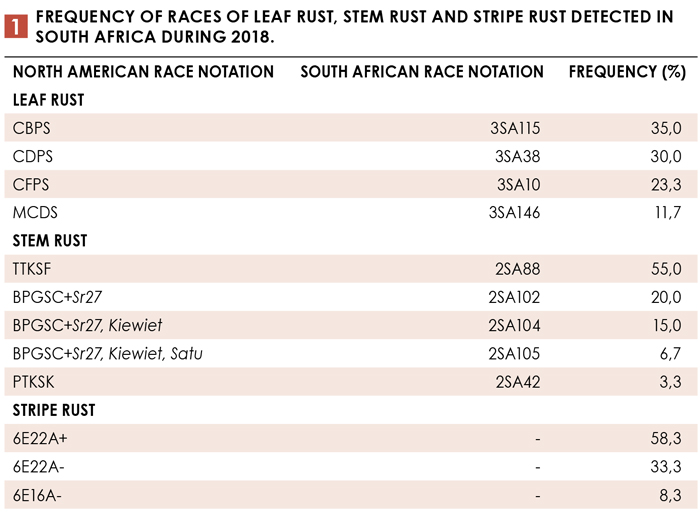 Previously, race 3SA115 was widely found in the Western Cape, but its prevalence has significantly decreased in recent years. Its occurrence in additional localities in the Free State (Bethlehem, Clarens, Harrismith and Bultfontein) contributed to the high incidence observed in 2018.

Race 3SA10 and 3SA38 were first detected in 2016 in the Western Cape and the present survey also confirmed their widespread occurrence in this region. These two races are virulent on resistance gene Lr24, but they differ on Lr20 and Lr26.

Since its first detection in 2010, 3SA146 has not been found in the Western Cape. However, it has been occasionally detected in KwaZulu-Natal, the Eastern Cape and Limpopo.

No new leaf rust race was detected in samples collected in 2018 and processed so far. However, seven new leaf rust races were identified with the surveys conducted during 2009 to 2016 indicating continued variability of the leaf rust pathogen in South Africa. Therefore, regular rust monitoring is important to quickly detect new races, identify effective resistance genes and alert wheat producers and researchers to the potential impact of new races.

Stem rust
Stem rust was observed in a few trap localities in the Western Cape, with over 30% severity being recorded on certain susceptible entries at Langgewens, Moorreesberg, Koringberg and Riversdal.

Infection in the remaining localities was low (trace to 5%). Trace levels of stem rust were seen in only three out of 33 producers’ fields visited. No stem rust was detected at any of the trap nurseries in the Free State and KwaZulu-Natal. However, trace levels of infection were observed late in the season in experimental plots in Bethlehem.

Race 2SA88, which is virulent on key resistance genes Sr9e and 38, is one of the 13 variants of Ug99, a highly virulent race that was detected in Uganda, East Africa in 1999. Ug99 and its variants overcame widely used stem rust resistance genes such as Sr24, Sr31, Sr36 and Sr38.

To date, one or more of the 13 races belonging to the Ug99 lineage have been confirmed in 13 countries including South Africa. Race 2SA88 has been commonly found in South Africa during the past 18 years, probably due to its broader virulence and the cultivation of susceptible cultivars in the Western Cape where stem rust regularly occurs.

Races 2SA102, 2SA104 and 2SA105 primarily infect triticale and they have been regularly found in the Western Cape in previous seasons.

However, a few stem rust isolates collected near Bethlehem in 2017 were identified as a new race named 2SA42 or PTKSK. PTKSK is a member of the Ug99 races and brings the number of Ug99 variants detected in South Africa to five.

Seedling tests conducted at the University of the Free State suggest that PTKSK is less virulent compared to the existing race PTKST and therefore it should not pose a significant threat to local wheat production. However, its detection underscores continued emergence of new stem rust races and emphasises the importance of sustained rust surveillance in this country.

Stripe rust
Stripe rust was detected in five of the eight trap nurseries in the Free State. Except for a few susceptible entries, on which over 20% severity was recorded, infections in the remaining entries were only trace to 5%. There was no stripe rust in the traps or producers’ fields visited in the Western Cape and KwaZulu-Natal.

Disease alert
An important development in the Southern African region was the detection of stripe rust for the first time in Zimbabwe during September 2018. Previous studies have shown the occurrence of similar leaf rust and stem rust races in Zimbabwe and South Africa indicating the possibility of inoculum exchange between these countries.

If the Zimbabwean stripe rust survives the summer and causes infection in 2019, windborne spores could spread to South Africa from infected fields in Zimbabwe. Therefore, it is important for South African wheat producers and researchers to be more alert during the 2019 season for signs of stripe rust on previously resistant cultivars.

Summary
Genetic resistance is one of the most effective and environmentally friendly options to control wheat rusts. However, rust pathogens frequently acquire new virulence and overcome resistance in existing cultivars.

Annual rust surveys help to quickly detect new races and identify effective resistance sources. With the surveys conducted by the ARC-Small Grain during the 2018/2019 season, no new leaf rust or stripe rust races were detected. However, a new stem rust race named PTKSK or 2SA42 was confirmed from a few isolates collected in the Free State in 2017. This race belonged to the Ug99 race group, bringing the number of Ug99 variants detected in South Africa to five.

Based on seedling tests, PTKSK was less virulent compared to the existing races and therefore it should not pose a significant threat to local wheat production. However, its detection underscores continued emergence of new rust races in South Africa and emphasises the importance of sustained rust surveillance.

Stripe rust was detected for the first time in Zimbabwe during 2018. As windborne spores could spread to South Africa from Zimbabwe, it is important for South African wheat producers and researchers to be alert during the 2019 season for signs of stripe rust infection on previously resistant cultivars.