Home FOCUS ON: INTEGRATED PEST CONTROL Towards a better understanding of entomopathogens for insect biocontrol

Insects are prone to infection by various microbes, termed entomopathogens (from the Greek: Entomon = insects and pathos = suffering).

These disease-causing entities contribute to the suppression of insect pests through not only natural infection, but also as artificially produced/formulated bio-insecticides. Amidst increasing concern over environmental contamination, health risks and resistance-development associated with chemical insecticides, interest in the exploitation of entomopathogenic microbes is growing.

At least 31 products, of which seven are manufactured locally, are registered under the Fertilisers, Farm Feeds, Agricultural Remedies and Stock Remedies Act (Act No. 36 of 1947). However, producers should be wary of products being marketed as ‘organically certified’, yet without a legitimate ‘L’ number under Act No. 36.

Entomopathogens comprise mainly fungi, viruses, bacteria and nematodes. There are key differences in the biology of these entities and how infection is caused. Moreover, once infected, certain behavioural changes may occur in the insect, while the signs and/or symptoms noted can reveal the identity of the pathogen involved.

An understanding of the basic principles will promote an appreciation of the role of these pathogens in providing a producer-friendly ecosystem service, bioproduct efficacy and general adoption of such technology by South African producers.

Entomopathogenic fungi
Fungi produce small seeds or spores (also called conidia) which act as the main units of infection. Once in contact with the insect, these spores germinate and directly penetrate the insect cuticle.

This ability renders fungi the principal type of pathogen associated with piercing-sucking insects, like aphids, stinkbugs and whiteflies (insects feeding ‘inside’ the plant and thus not exposed to the same level of pathogen ‘intake’ as in the case of insects with biting-chewing mouthparts).

Once inside the insect, the fungus proliferates and eventually causes insect mortality through nutritional deficiency, physical destruction of organs and/or production of toxins. Shortly after mortality, the insect cadaver becomes ‘spongy’, generally has no foul odour, and may show small black spots where fungal entry through the cuticle occurred (especially in soft-bodied insects).

Under favourable conditions, the fungus can re-emerge from inside the insect body and grow on the body surface, where new spores are formed and dispersed through wind, insects, water, etc.

Under favourable conditions, mortality occurs after three to four days plus (depending on fungal virulence/host susceptibility), but a cessation in feeding may occur within 24 hours. Such cessation implies control, as no more damage is caused to foliage, fruit and roots and/or other structures.

Cereal aphids, especially on wheat, barley and oats, are often infected by aphid-specific fungi (in the Entomophthoromycota), negating the need for insecticide applications.

The rose-grain aphid, Metopolophium dirhodum, is highly susceptible to these fungi (at least three entomopathogenic fungal species) and is a classic example of aphid control through an ecosystem service (Photo 2).

Unfortunately, triazole- and imidazole-based fungicides used for plant pathogen control are highly toxic to these entomopathogenic fungi and such chemicals should be applied judiciously.

Entomopathogenic viruses
Infection of insects by a virus occurs via a structure called a virion or virus particle and the different virus families (Baculoviridae being the most important) have different forms and shapes.

Viruses are obligate intracellular pathogens, which need host cells to replicate. Unlike fungi, infection of the host occurs mainly through oral ingestion (per os). It is thus important against insects with biting-chewing mouthparts.

Transmission is also possible by way of the egg, either through the ovary or on the surface of the egg. In limited cases, a virus can also be transmitted via the male (sperm). In the case of baculoviruses, infection is triggered following ingestion of so-called occlusion bodies.

These occlusion bodies are protein-based structures that contain the virions. The occlusion bodies disassemble in the alkaline environment of the insect gut, releasing the virions. In South Africa, virus-based products contain one of two virus ‘types’, namely granulovirus or nucleopolyhedrovirus, both belonging to the Baculoviridae.

Viruses are among the most host-specific insect pathogens, with only four insect species carrying entomopathogenic virus registrations under Act No. 36, namely codling moth, oriental fruit moth, false codling moth and African bollworm (targeting the larvae, all with biting-chewing mouthparts).

Symptoms
Typical symptoms of virus infection include behavioural changes such as reduced feeding, lethargy or hyperactivity, movement (climbing) to elevated positions and inhibition of moulting in larval stages. Signs include swelling (bloating) of the body, colour change, a very thin or ruptured integument, milky haemolymph (blood) and deformed wings.

Eventually, the infected insect will die and the cadaver, especially lepidopteran larvae, will liquefy, releasing large numbers of virions into the environment. Although susceptible to UV, these virions are otherwise highly persistent and can remain viable for many years – hence their amenability to formulation as bio-insecticides.

Under field conditions (notably wheat and barley), populations of the African bollworm often succumb to infection by a naturally occurring nucleopolyhedrovirus. Infected larvae are seen on the awns where their bodies liquefy, releasing virions onto plant surfaces and so exposing healthy larvae to infection (Photo 3a and Photo 3b). 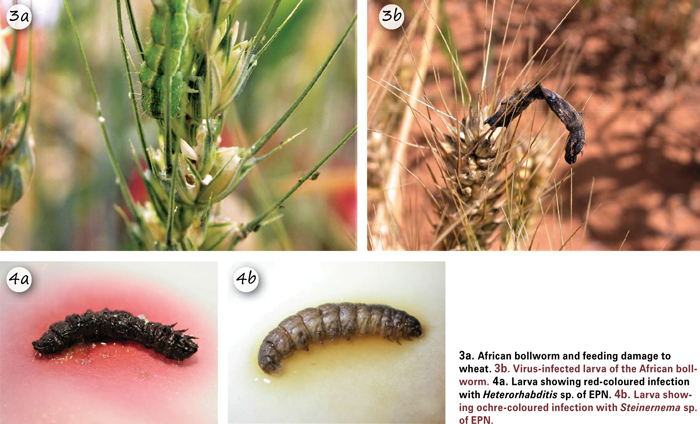 Bacteria are the most common microorganisms associated with insects (symbionts and pathogens) and therefore difficult to link to certain insects, although moth larvae, flies and beetles seem the most affected by entomopathogenic bacteria. Bacteria-based products registered in South Africa contain mainly Bacillus thuringiensis, commonly referred to as BT.

This is a common soil-borne bacterium, with more than 30 subspecies known. A main feature of this bacterium is the production of parasporal or crystal bodies containing specific insecticidal toxins, termed the Cry (crystal) and Cyt (cytolytic) proteins, with toxicity to specific insect hosts.

Note that these toxins are also used for insect control in genetically modified or Bt-transgenic crops (not discussed here). As with the occlusion bodies of viruses, these crystal bodies are very stable and amenable to formulation as bio-insecticides. Similar to viruses, the primary route for infection is per os, but some infections may occur through the egg, cuticle and breathing system (trachea).

Symptoms
Typical symptoms of Bacillus-infection include behavioural changes, such as reduced or complete cessation of feeding, lethargy and paralysis. For B. thuringiensis, signs include colour change (brown to black) and flaccid bodies as well as a putrid odour.

Nematodes
Not all nematodes are bad. Entomopathogenic nematodes (EPN) as well as insect-parasitic nematodes are beneficial organisms and can be exploited for insect pest control. Important families are the Steinernematidae, Heterorhabditidae, Rhabditidae and Mermithidae.

The EPNs are found in the families Steinernematidae and Heterorhabditidae and have a strong mutualistic association with bacteria in the genus Xenorhabdus and Photorhabdus, respectively. Here, the nematodes act as carriers or vectors of the bacteria, which are the actual insect-killing agents within the relationship.

EPNs are essentially soil-borne organisms and are therefore mainly associated with soil-inhabiting insects or lifecycle stages completed in soil. For EPNs, the so-called infective juvenile is the stage responsible for infecting the insect host, either directly (through natural openings such as the mouth, spiracles or anus) or by using ‘mouth hooks’ to lacerate the insect cuticle.

Once inside the host, the infective juvenile will release its mutualistic bacteria, which then rapidly kill the host and render the internal organs/tissues suitable for ingestion by the nematodes. EPN-related infections are associated with a very short incubation period followed by rapid mortality, within 48 to 72 hours. This is due to the toxin-producing bacteria released by the infective juvenile immediately after penetration of the host.

Symptoms
Again, symptoms include aberrant behaviour and cessation of feeding. Following mortality, EPN-infected cadavers show characteristic colour changes: Brick-red for Heterorhabditis spp. and ochre/brown for Steinernema spp. (Photo 4a and Photo 4b). The most notable sign of EPN-infection is the presence of (emerging) infective juveniles on the insect cadaver.

Closing remarks
An expanding range and uptake of microbial-based products in South Africa is encouraging. Moreover, the launch of the South African Bio-Economy Strategy has helped set South Africa on a trajectory in support of the National Environmental Management Act (NEMA) 1998 (Act No. 107 of 1998) through the development of a pesticide reduction strategy.

Harnessing the power of naturally occurring and/or formulated microbial entomopathogens, supports not only the preservation of planet finite resources, but ironically, the active life of a chemical insecticide may be prolonged through reduced selection pressure brought about by the biological component.

Importantly, the level of efficacy and speed-of-kill differs from that obtained in a purely chemical paradigm. In practice, greater care must be taken when transporting and/or storing biological material. Following infection, insect behavioural changes include a cessation of feeding, implying earlier control than merely expecting to see dead insects soon after product application.

Supporting products with a legitimate ‘L’ number is crucial in avoiding a ‘once bitten, twice shy’ scenario – so often the result when applying a scientifically unfounded ‘snake oil’.

More info
For a more detailed, technical overview of the subject, interested readers are referred to the paper:

Plan for agriculture: What comes first?