Home ON FARM LEVEL The effect of plant stress induced by northern corn leaf blight in...

Plant stress may be defined as an adverse effect on the plant which is brought about by a change in the optimal growing environment. Under such less than optimal growing conditions the plant’s growth, productivity, reproductive capacity or survival are influenced negatively.

If the stress is severe enough, it may prevent flowering and seed formation and induce senescence that leads to plant death. One such stress that maize plants in particular experience, is a foliar disease called northern corn leaf blight (NCLB), that has been on the rise over the past several years.

In South Africa it commonly occurs in the eastern parts of the country (KwaZulu-Natal and Mpumalanga) as well as under irrigation due to the conducive climate created. It has been reported that under ‘stressful’ conditions, foliar disease severity is positively associated with a reduction in yield along with a predisposition of the infected plants to experience stalk rot.

Stalk, root and crown rot
Stalk rot as opposed to root rot (Photo 1) and crown rot (Photo 2) has been correlated with NCLB globally. Plants with ‘healthier’ leaves have a larger photosynthetic area that will increase and prolong the kernel filling phase, which will in turn result in higher yields. 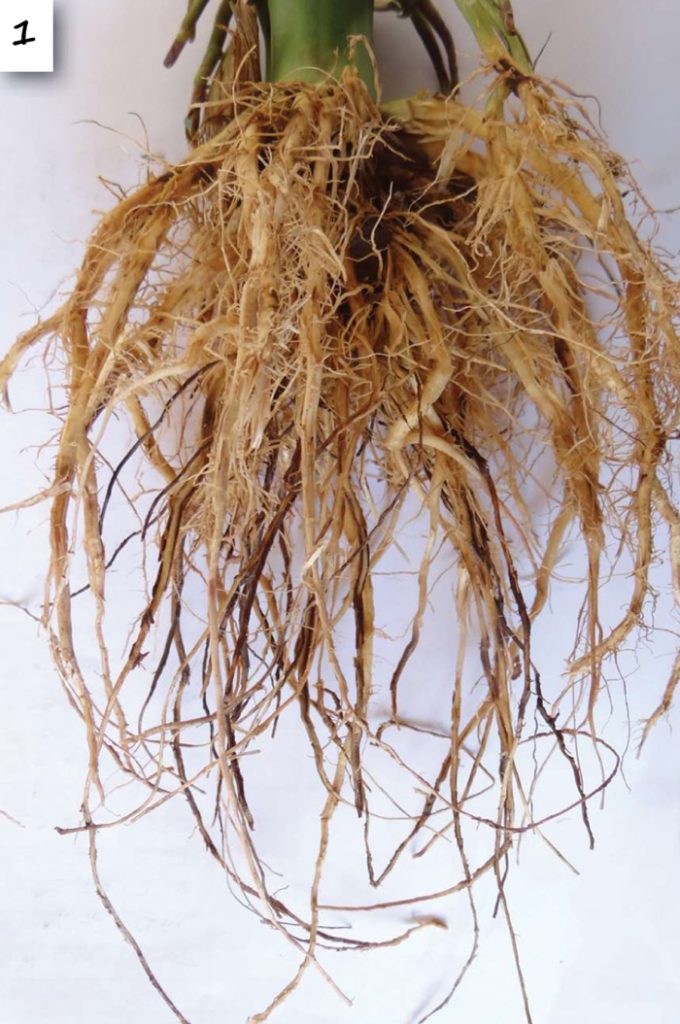 In contrast, under high leaf disease pressure, the photosynthetic leaf area available for grain fill is lost and sugars are diverted from the stalks for grain fill. The stalks become weakened and senesce prematurely. The stalks then start to cannibalise and susceptibility and subsequent colonisation by opportunistic stalk rot organisms such as Macrophomina phaseolina (a causal agent of charcoal rot) and Fusarium are increased.

Roots and crowns on the contrary, often start to rot as a symptom of a particular phenomenon that occurs on a plant. Compaction around the root system, wet soils throughout the growing season as well as insect/nematode damage are just a few examples.

As root and crown rot progress, it restricts the plant’s ability to take nutrients up the stalk to the ears and the problem manifests itself above the ground. Although a correlation between NCLB disease and stalk rot has been observed, it has not yet been reported as to whether root and crown rot would be enhanced under a severe NCLB infection.

Study
As part of a study which is currently being undertaken at ARC-Grain Crops, one of the objectives is to establish whether the stress induced by NCLB would result in greater root and crown rot severity, thus reducing potential yields even more.

Project
A project was accordingly initiated during the 2016/2017 season with the second season being 2017/2018. To date, two trials have been planted during November and December of each season at ARC-Grain Crops, Potchefstroom. Three cultivars with varying resistance levels to NCLB (as observed through past screenings of the cultivar evaluation trials at Potchefstroom and Grootpan) were included (susceptible, moderately susceptible and resistant).

Once these screenings were finalised, the roots, crowns and stalks were analytically assessed through quantitative polymerase chain reaction (q-PCR) to identify and quantify various pathogenic fungi as well as to see whether there was any association between the stress induced by NCLB and root, crown and stalk rot. 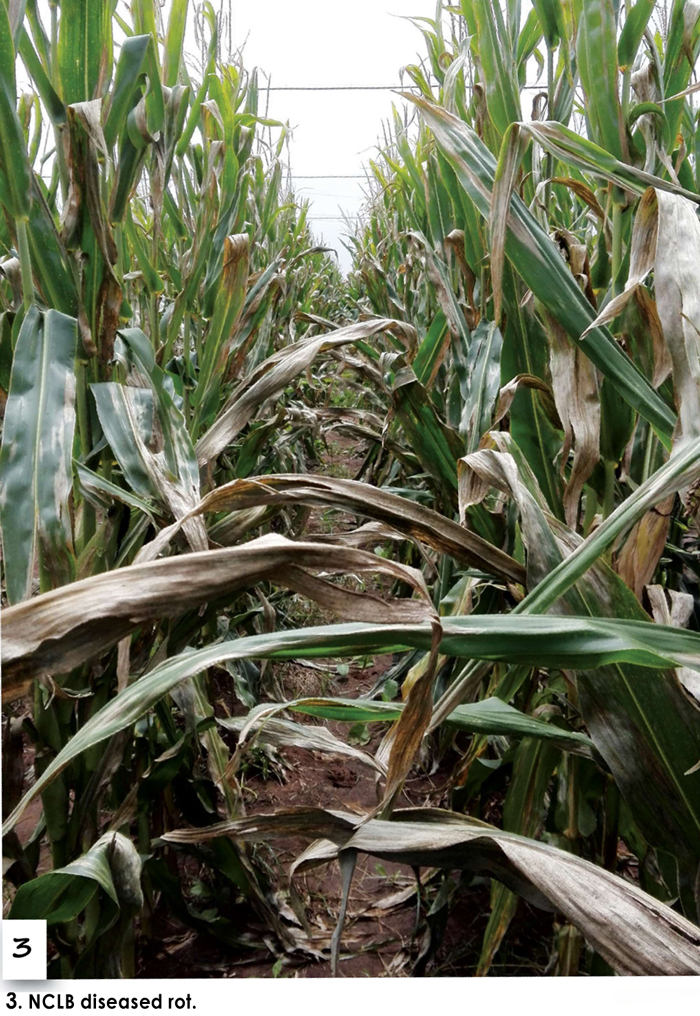 As analyses of the 2017/2018 season samples are still being conducted, preliminary findings of only the 2016/2017 season will be shared in this article. For the first season varietal differences were found between NCLB disease severity on the roots and crowns, mainly due to the different responses of the cultivars used.

From the 2016/2017 results, it rather appeared as though cultivar differences occurred regarding their resistance to root rot infection, and not because of their NCLB resistance. Of the twelve common soilborne pathogens tested, none of them appeared to show any notable correlation between NCLB and root rot or crown rot in any of the three cultivars.

Even though stalk rot severity has been linked to NCLB severity internationally, no stalk rot was observed in the current study, irrespective of the fact that NCLB disease severity of 60% and greater were achieved. This might be due to the climatic conditions not being suitable for stalk rot development, or to the fact that all three cultivars included in the study already possessed some form of stalk rot resistance. This emphasises the importance of trial repetition over seasons, so that a better indication can be obtained as to which of the two scenarios is the most likely one.

Early infection before silking may cause grain yield losses of more than 50%, along with a reduction in feed value. However, when heavy infection occurs late in the season, after the ears have been well formed and the plants are approaching maturity, losses may be largely restricted to the leaves and stalks with yield and quality of leaves, stalks and grain being affected to a lesser extent.

Thabang - May 3, 2022
0
A decision faced by producers every year is whether to add value to their grain and livestock: Are they going to sell their grain...

Farmer of the Year: Celebrating learning, development and growth – meet...