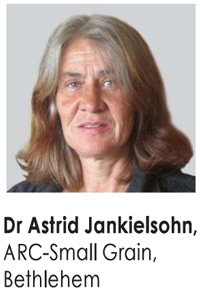 Resistance in crops is an effective management tool for insect crop pests. A drawback of this management option is that the insect can overcome the resistance in the crop, which will result in new insect biotypes able to damage the resistant crop plant. This is the case with Russian wheat aphid (RWA) resistant wheat cultivars.

Up until 2018, four Russian wheat aphid biotypes were known in South Africa. RWASA1 has been present in the wheat production areas of South Africa since 1978 and was able to overcome the Dn3 resistant gene in wheat (Table 1).

RWASA4 was recorded in the Eastern Free State during 2011 and has the Dn5 resistant gene added to its virulence profile (Table 1). Since 2011 these four Russian wheat aphid biotypes have occurred together, mostly in the Eastern Free State, in a biotype complex with varying concentrations of different biotypes over the years. In the other parts of the country (Western and Central Free State, Northern Cape and Western Cape), it was mostly only RWASA1 that occurred in the wheat production areas.

During 2018 there were no Russian wheat aphid infestation in the wheat fields surveyed in the Western and Central Free State and Northern Cape (Figure 1). RWASA2, RWASA3 and RWASA4 were distributed in the Eastern Free State (Figure 1). 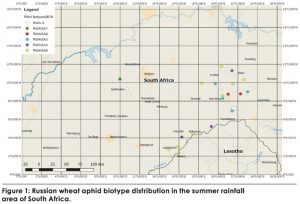 This biotype was recorded at eight different sites in the Eastern Free State (Figure 1). Only RWASA1 was recorded in the wheat production areas of the Western Cape (Figure 2). 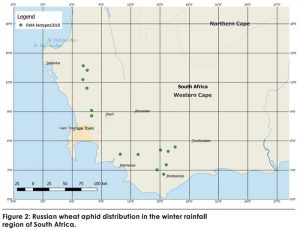 Wheat cultivars with resistance against RWASA1, RWASA2, RWASA3 and RWASA4 will not necessarily show resistance in the wheat production areas of the Eastern Free State as a result of the presence of RWASA5 in these areas.

Thabang - August 11, 2021
0
The annual preharvest grading proficiency testing schemes for different grains and oilseeds originated from a need identified by the members of Agbiz Grain to...

Ter sake | On the agenda