Such spray programmes usually include a combination of strobilurin and triazole at the five-leaf to eight-leaf stage of plant growth, followed by a second spray of triazole 28 days to 30 days after the first spray. No fungicides are currently registered to control Fusarium ear rot diseases and their subsequent mycotoxins. The aim of this study is to determine whether prophylactic fungicide regimes for foliar diseases could reduce the risk of colonisation of grains by Fusarium verticillioides (Photo 1) and F. boothii (Photo 2) and their resultant mycotoxin production. 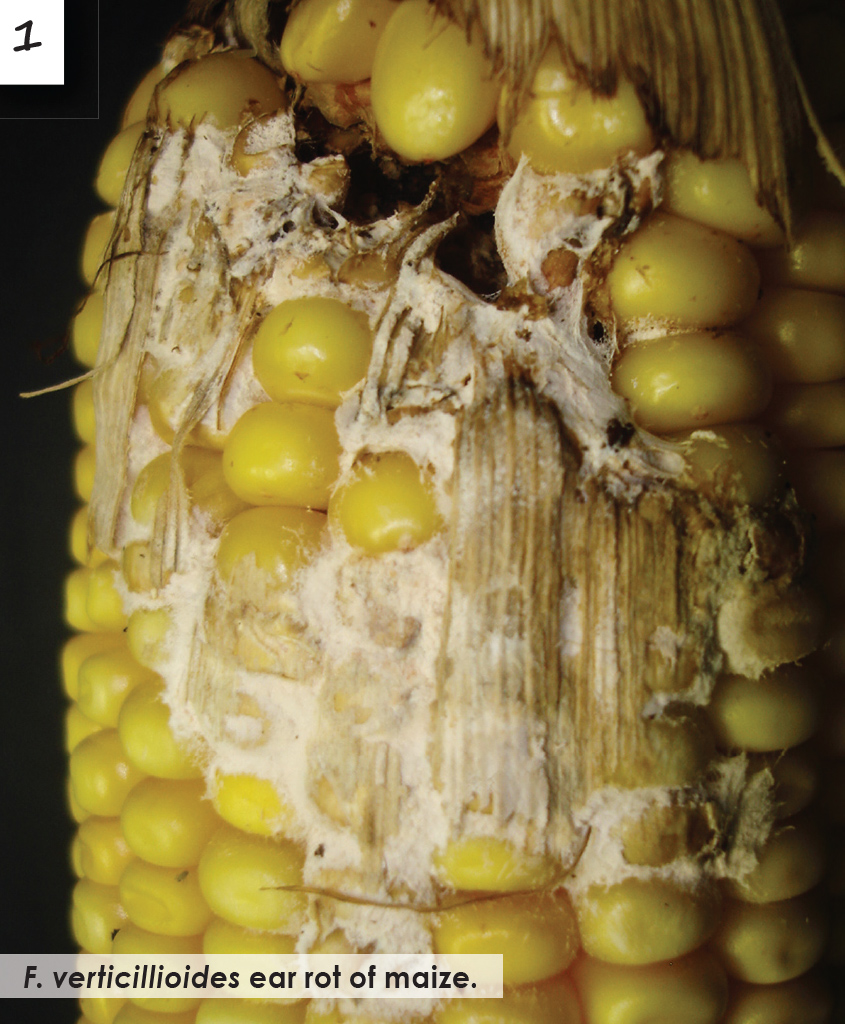 F. verticillioides and F. boothii are two of the predominant maize fungal ear rots that can cause a reduction in grain quality as well as the production of mycotoxins that can be detrimental to humans and animals. F. verticillioides can produce fumonisins B1, B2, and B3 and F. boothii can produce the estrogenic metabolite zearalenone (ZEA) together with the nivalenol (NIV) and deoxynivalenol (DON) mycotoxins.

Randomised split-split plot trials were conducted during the 2018/2019 planting season under dry land conditions with three replicates per treatment at Potchefstroom (warm, dry production area in the North West Province), Cedara (subtropical production area in KwaZulu-Natal) and Vaalharts (semi-desert area in the Northern Cape). The whole-plot factor represented days of spray applications and the second main effect, spray combinations. The sub-plot effect was cultivar. Two maize cultivars (BG3292 and BG3492B) were used and trials were maintained according to best practice appropriate to the respective production areas. Experimental plots were monitored for the five-leaf to twelve-leaf, pre-flowering, flowering and soft dough stages of plant growth. 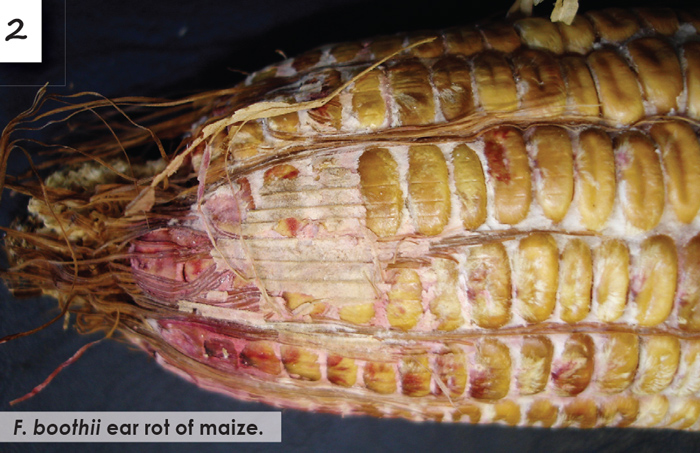 Active ingredients from the triazole, strobilurin and benzimidazole fungicide classes, currently being used by producers as prophylactic fungicides for the prevention and control of foliar diseases, were tested in various combinations (Table 1). The controls included naturally infected plants with no fungicide treatment. Four rows of each cultivar in an experimental block were planted and the middle two rows were sprayed to prevent fungicide drift to other experimental blocks. The outer two rows represented the controls. During silking, maize ears of one middle row was inoculated with F. verticillioides and the other middle row with F. boothii. Plants were scouted throughout for leaf diseases and stalk borers. Plots were individually harvested and rated, threshed and milled. Samples were subjected to qPCR and HPLC analyses to determine the amount of fungal DNA present in grain samples and to quantify different mycotoxins, respectively. These trials were repeated in the 2019/2020 season and the results are currently being analysed. Therefore, the preliminary results of the 2018/2019 season are discussed in this article.

Results showed that the inoculation method was effective, as target DNA fungal biomass was significantly higher compared to the naturally infected plants. Infection of maize grain by F. verticillioides and F. boothii (target DNA) varied over the three localities and was the highest in Cedara and the lowest in Potchefstroom. In this study period, cultivar BG3292 was always more susceptible to fungal infection and mycotoxin production in maize grain, compared to its isoline BG3492B. The highest fumonisin levels were recorded at Potchefstroom in cultivar BG3292 and overall, DON and ZEA levels were quantified in low amounts. None of the mycotoxin levels exceeded South African regulatory limits. In some instances, only cultivar as main variable had an effect on mycotoxin production in maize grain.

This is the first time that it can be proved that certain fungicide spray combinations can reduce fungal infection (in Cedara and Potchefstroom), which is an added advantage for producers. The non-significance of application dates is also a positive finding, because producers do not need to add extra sprays to the existing prophylactic fungicide regimes (to include a later spray), which means that extra costs are avoided.

It must be noted that in an environment conducive for fungal infection such as Cedara, the 50% growth reduction of F. verticillioides target DNA levels (1 335,2 pg µg-1, 1 140,5 pg µg-1 and 1 123,4 pg µg-1) is still relatively high and can be considered as a yield constraint. Therefore, the reduction of fungal infection by certain fungicides should be seen as an added advantage, but should be used in an integrated pest management system to mitigate maize ear rot infections and their related mycotoxins. It is reported in literature that the stress of fungicidal treatments can affect other facets of fungal metabolism, including sporulation and secondary metabolite (mycotoxin) accumulation. In this study elevated mycotoxin levels were not recorded for fungicide spray combinations and this will be closely monitored in the second year data that will follow.