Home EDITORIAL Taking the first step in the right direction

NAMPO 2019 is behind us and the weather and company were truly great, weren’t they! On the Monday before NAMPO an idea popped into my mind: ‘What if nobody shows?!’ – we and the exhibitors all put our best foot forward and then nobody pitches…

Well, when the scanners started working early on Tuesday morning, the graphs on our phones showed that everything was going according to plan. I get very few opportunities to really walk around the grounds, as I am mainly involved in meetings. I fit an entire year’s appointments into a week! It is delightful to see all the important role-players there, and with the genial atmosphere the conversations progress smoothly. Plans for the year are made and money and people’s time are invested in the plans to obtain solutions.

I do not think there is any uncertainty about what Grain SA has to do: The grain producers are struggling. Our margins are not sustainable. Every conversation is about what we can do to make the industry profitable again. This is not just ordinary complaints by producers. No: This is an appeal for help.

Some appeal loudly and others impatiently (as if we control the rain). Then there are those who appeal for assistance humbly, hat in hand. It hurts to hear these stories, and moves one to try and do something about it. The days of those shouting the loudest being heard most often, are long past. One of the conversations during NAMPO was with the JSE about Prof Matt Roberts’s report on the location differential. At the time of writing this had not yet been published. The continued postponement does not help to calm things down either.

One of the comments after the election was that the country’s population is now even further apart in the light of the growth in the parties to the left and the right. It is now just like in organised agriculture. The leftists and the rightists both take a step or two away from the middle. When we consulted him about land reform, uncle George Bizos always told Louw Steytler: ‘The centre will hold!’ Keep on doing the right things.

Now we in the middle, whose numbers have been reduced, have to stand firm and lead the way. Let us hold thumbs that our president will find sufficient support in the middle of his party to show a straight way ahead, and not one with bends like some of his predecessors. One of the outcomes of all the NAMPO discussions was in fact that reasonable people who have the future of agriculture at heart are in the process of finding each other. 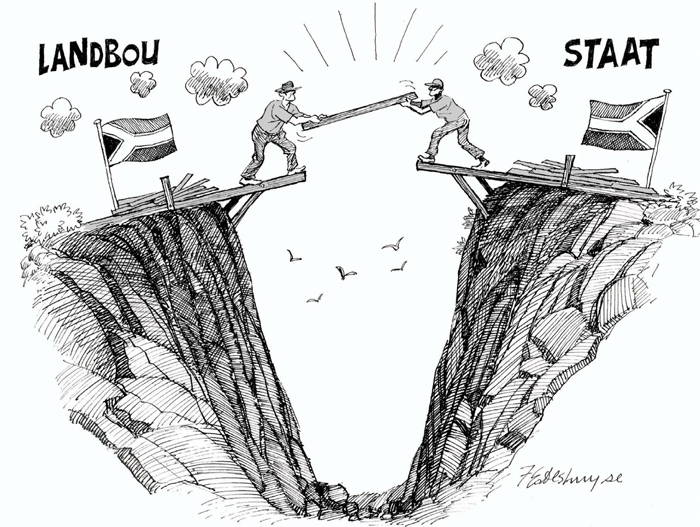 During one of the Nation in Conversation debates in which I participated, I arrived at the analogy of a bridge – a bridge that had been destroyed by a severe storm. Now the state and the private sector have to start rebuilding the agricultural bridge from different sides. If we do not align it correctly right from the beginning, it will cost double the time and the money. That is exactly what is envisaged with the five-year plan for agriculture.

The bridge of trust will probably start out on an unsteady footing, but that is what brave leaders do: Take the first step in the right direction. Our trust in each other’s motives and abilities will take us a long way towards ultimately being able to walk to and fro across the bridge to provide the nation, and others too, with food.

These are really high-risk but exciting times ahead. Thank you for your trust in Grain SA to help build the bridge so that it can be sustainable for all.

Thabang - May 3, 2022
0
A decision faced by producers every year is whether to add value to their grain and livestock: Are they going to sell their grain...