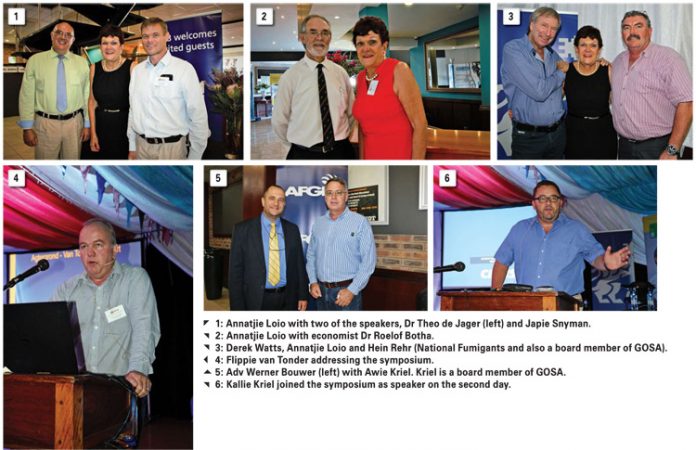 In the midst of the worst drought in 100 years in southern Africa, the members of the Grain Handling Organisation (GOSA) ensured under challenging circumstances that South Africa had sufficient food for the nation and for neighbouring countries.

‘In addition to a domestic maize crop of more than 7 million tons that was handled, more than 2 million tons were imported through the ports of Cape Town, Durban, Port Elizabeth, East London and Richards Bay. White maize was imported from Mexico and the USA, and yellow maize from Argentina, Brazil, Romania, Ukraine and the USA.

‘More than 66 shiploads of maize were unloaded – with the biggest of these from Ukraine, with 54 547 metric tons on board,’ said Ms Annatjie Loio, president of GOSA, at the opening of the organisation’s symposium in Mossel Bay on 22 March.

‘At one stage our members in the Durban harbour loaded 160 railway trucks and 400 trucks a day. The imports of wheat, grain sorghum, soybeans, sunflower seeds and oilcake were also handled successfully, as were maize imports for neighbouring countries through South African ports and those of Maputo and Beira,’ Loio added.

In agriculture we are obliged to promote food safety and security. Although there are so many negative influences from outside, we must still do our best and work together positively to achieve success in this country we love so much.

Conditions across the maize-producing areas look promising and an estimated maize crop of more than 13 million tons is expected – this is estimated to be the third biggest crop since 1980/1981, while the carry-over stock is small. The country’s silos can now be filled with grain again, which will relieve the pressure of the past sea – son’s unutilised silo capacity on agribusinesses. Income from the storage of grain will mean a financial boost after the drought of the previous season. The estimated storage is 16 million tons. If the rain continues through the harvest period and temperatures drop, getting the moisture content at an acceptable level can be challenging.

The estimate of a large maize crop and the recent strengthening of the rand caused the price of maize to drop by as much as R2 000/ton. This decline was not good news for producers, but can lead to cheaper food for the end consumer, a higher local consumption of maize that could possibly increase to 11,5 million tons, a drop in food inflation and a decline in exports in the coming season. More job opportunities can definitely be created. Currently, agriculture provides jobs to 900 000 people in our country, which constitutes 6% of the labour force. 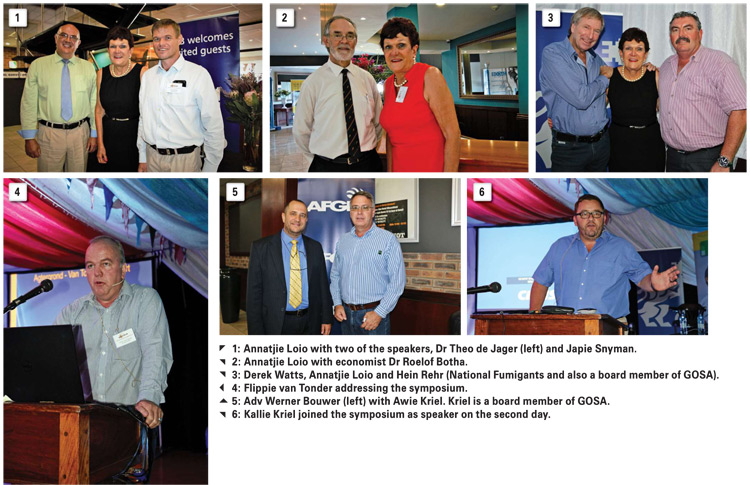 Dr Roelof Botha (economist)
With his advice to Government to ‘stop talking and start working to correct the mistakes’, Dr Botha pointed out that South Africa’s problems are at micro level because every protest action can be traced back to a geographic area where promises have been made about infrastructure or services, and have not been met. It can be corrected with the right skills and there are so many pragmatic ways to do it. Nevertheless, Botha believes that while the inability of government leaders to curb the growth potential of the economy, the president and his cadres cannot immerse South Africa’s economy worth R4,4 billion in recession.

Japie Snyman (Seaboard Overseas Trading and Shipping)
It is not easy or without challenges to land a vessel of grain locally or to export maize to Korea, Singapore or Taiwan from South Africa. To do the calculations is one thing, but to manage the practicalities is but one of the typical challenges which local importers of grain face on a daily basis. Looking back over a past season of inflated grain imports due to severe dry conditions experienced throughout the southern region of the continent, he added that a conducive environment for imports is not created by the South African government from an importer’s point of view.

Flippie van Tonder (Van Tonder Transport Services)
Factors such as employing state of the art vehicles and trailers, well-remunerated drivers, best management systems, strong relationships and personal involvement in management differentiates grain specialised transporters from the rest. Van Tonder urged grain handlers to take these factors into consideration by refraining from making use of transporters who do not adhere to road regulations and overloading guidelines. ‘Transporters who invest in technology and efficient human resources should be allowed to charge a premium,’ he concluded.

Dr Theo de Jager (president of SACAU and of PAFU)
Through agriculture Africa has the land and soil, water, climate and the producers, but it lacks value chains, financing, technology and expertise. The effect of policy issues and also property rights and financing remain a challenge to produce in Africa. Smallholder farming is over romanticised and is a poverty trap. The only way to eradicate poverty in Africa is by creating wealth.

Derek Watts (Carte Blanche)
As a seasoned presenter of this investigative journalism programme, Derek Watts shared an overview on his 29 years as a part of the Carte Blanche team on the tail of crooks. He referred to the spike in grain theft and specifically their exposing of maize outloaded at Schuttesdraai Silo in the Free State which ended up at silos in Bronkhorstspruit rather than at its destination.

Adv Werner Bouwer (Nexus Forensic Services)
A macro problem in South Africa concerning ethical conduct is impunity. This does not refer to whether the laws to govern corruption exist, but the fact that it is not applied. Ethics should be a growing and evolving focus in business culture – even in small businesses. A healthy organisational culture is not about what you say, but what you do. How your employees perceive you responding to situations that may harm the reputation of the organisation is what counts. In the effective organisation model the emphasis is on cultural controls and not on increasing the load of detailed systematic or supervisory controls.

Kallie Kriel (Afriforum)
South Africans should create their own future, read the spirit of time and familiarise themselves with the policies that governors take, what they want to achieve and where they are heading. Expropriation of land without compensation may be catastrophic to the country’s economy. People will not invest if there is no respect for ownership. We must make sure we speak from a position of moral high ground and are not repulsive to people. We have the right to fight for what is fair. It is very important that we participate in the public debate and put alternative ideas on the table. A prerequisite for success is strong institutions.