Home ON FARM LEVEL Fusarium head blight incidence is on the rise, globally 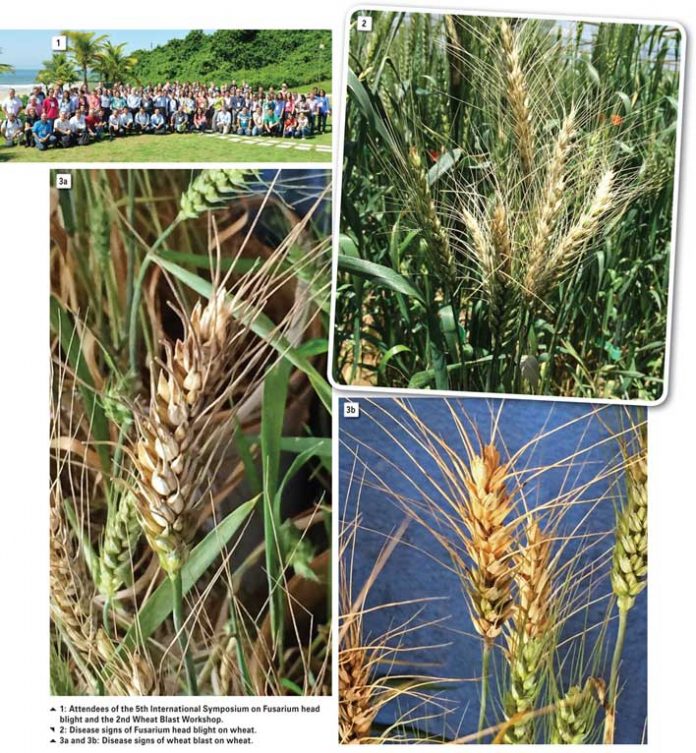 Recently, research staff from the ARC-Small Grain Institute (ARCSGI) had the privilege of attending the 5th International Symposium on Fusarium head blight (FHB) and second Wheat Blast Workshop held in Florianopolis, Brazil from 6 to 9 April 2016.

There were 163 delegates (representing 31 different countries) who work only on Fusarium head blight (Photo 1). Over the four day programme, twelve keynote speeches and 24 invited oral presentations were delivered. Two posters displaying current research being conducted at ARC-SGI were presented with the generation of overwhelming interest during the one-week conference.

The first poster was on the development of diverse Fusarium head blight resistant wheat cultivars and the second on the evaluation of scab entries evaluated under field and glasshouse conditions.

Breeders from a research group in Austria are making significant progress in further improvement of Fusarium head blight resistance by looking at selection for taller mutant varieties containing one or two dwarfing genes and looking at the trait of anther retention or extrusion.

From their research, developed lines that are taller and do not retain the anthers during flowering, are preferred during selection as the data suggests this material is expected to be more Fusarium head blight resistant.

Multiple international research groups around the world are racing to be the first to clone the Fhb1 gene (codes for a DNA binding protein). It was mentioned that simply having Fhb1 in the background of material can result in 20% to 50% reduction in Fusarium head blight severity. The outputs of these research groups were presented and should be published in the near future. The Fhb2, Fhb4 and Fhb5 genes are currently being fine-mapped by an international group for the identification of better diagnostic gene markers.

Research presented from the USA perspective was interesting as Fusarium head blight is now considered the most economically important disease on wheat and barley. An increase in Fusarium head blight incidence in the USA has been attributed to a number of things (especially since 2013) namely, more irrigated wheat in rotation with maize, integrated with the dairy industry.

There has been a boom in craft breweries in the USA, now with over 3 000 small breweries established, using 35% more barley malt. The increase in barley production has also had a significant effect on Fusarium head blight incidence.

It was concluded from an international viewpoint that conservation agricultural tillage practices are here to stay and as Fusarium head blight researchers we must accept it and come to terms with it. The international community is encouraged to work around no-till or reduced tillage systems, which have more advantages in other areas of crop production and far outweigh the risk posed by increased incidence of Fusarium head blight outbreaks.

Concern was raised following fungicide testing research conducted by different groups over several years. These results indicate that fungicides within the strobilurin group significantly increases Deoxynivalenol (DON) mycotoxin levels (6% – 18%) in the harvested grain after treatment. The Fusarium head blight disease symptoms are suppressed by this fungicide group but DON production is stimulated by a chemical- pathogen interaction that is not well understood yet. This must be noted by the South African wheat/barley industries if fungicides become registered for Fusarium head blight control on these crops in future.

Unfortunately, another scientifically proven negative effect of Bt-maize was identified. From studies done internationally, the stubble of Bt-maize supports the Fusarium head blight disease complex and makes it more difficult to control.

As the Bt-maize stubble/residue is damaged to a lesser degree by insects during the season, there are fewer entry points (wounds) for microbial activity. As a result, the Bt-maize stubble breaks down or decays much slower. Maize stubble/residue can remain the primary inoculum source for Fusarium head blight infection in the following crop/season for up to three years. This situation could be made worse with Bt-maize.

Producers and researchers need to make use of an integrated disease management approach. The best control and yield advantage achieved in multiple studies was when a moderately resistant cultivar was planted in combination with fungicide control.

Wheat blast has very similar signs to that of Fusarium head blight on wheat (Photo 2, Photo 3a and Photo 3b). Characteristic signs are silvery white spikes/heads that develop in patches in the field. Signs may also appear on the lower leaves. 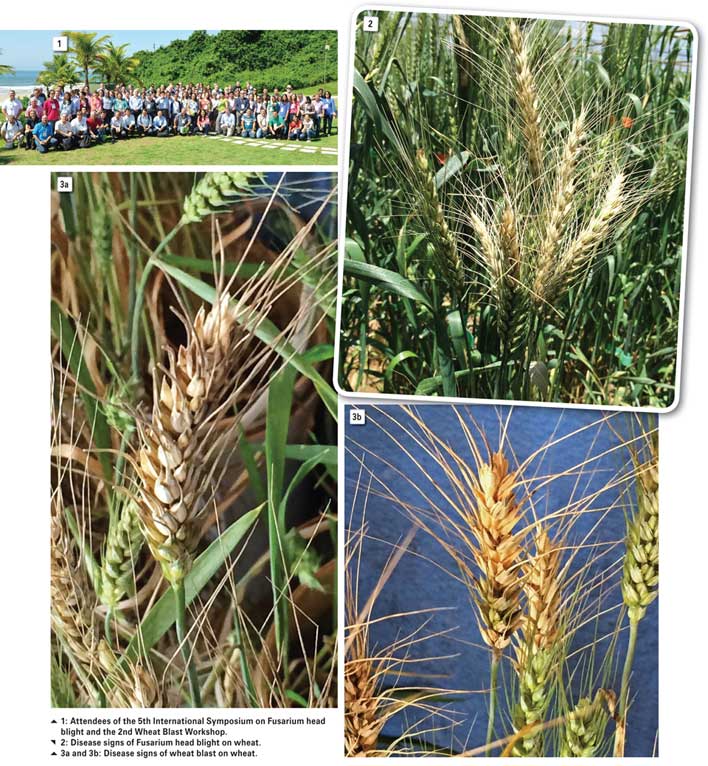 The canopy of the wheat crop is still green. Greyish fungal growth can be seen on the rachis between spikelets on the head. Harvested grain from the infected spikes appear chaffy, shrivelled and low in test weight, similar to that of Fusarium head blight. In some cases, up to 100% yield loss may occur. The wheat blast disease is seed-borne. Grasses may also be an alternative host for the disease. This disease of wheat has the potential to be devastating, even been considered as a potential biological weapon to cripple economies.

The requirements for wheat blast disease development are very warm, wet and humid conditions. Long periods of leaf wetness are required for optimal disease development. Areas that might be at risk in South Africa includes the cooler and warmer irrigation areas since temperature and humidity play a big role in the occurrence of wheat blast.

Wheat blast was first identified in Brazil in 1985. It has slowly spread through most countries in South America and into the USA. However, last year, the first report in Asia was made as it had spread to Bangladesh. Bangladesh is a net importer (3 million tons) of wheat.

The wheat blast epidemic in Bangladesh affected 15% of the area planted. This significantly increased the need to import more wheat grain. Only limited control can be achieved with the application of fungicides. There are very few known or identified resistance genes in wheat. The disease can devastate an entire field in three to five days after signs have first been noted.

Research staff of ARC-SGI learnt a lot during the visit to Brazil and will now apply the knowledge gained to improve their research outputs and create awareness around the dangers posed by Fusarium head blight and wheat blast.