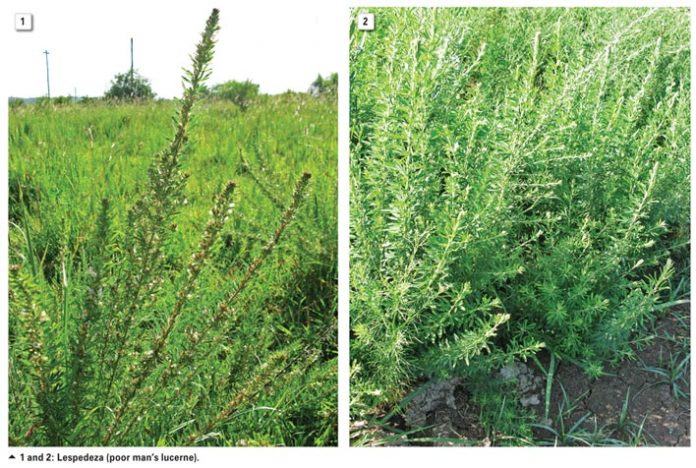 This article is the 13th in a series of articles highlighting a specific pasture crop species that can play an imperative role in conservation agriculture (CA) based crop-pasture rotations. Besides improving the physical, chemical, hydrological and biological properties of the soil, such species, including annual or perennial cover crops, can successfully be used as animal feed.

It is imperative however to identify a pasture species fulfilling the requirements of a dual purpose crop, i.e. for livestock fodder and/or soil restoration. This article focuses on a perennial legume pasture crop commonly used in the summer season for as long as five years between annual crops as a grazing and/or hay crop. With the rising cost of fertilisers and the objective of sustained soil fertility and soil health improvement, this option can provide an opportunity.

This is a perennial summer growing legume indigenous to East Africa. It has a shrubby growth form, is deciduous and can grow up to 1,5 m tall.

It has thick stems, is very leafy and grows upright. Common characteristics include drought tolerance, being a non-bloating legume and a significant seed producer. Sericea lespedeza (Lespedeza) is commonly used for pasture, hay, soil conservation and wildlife. Many varieties are used around the world, including the most locally used AU Lotan and AU Grazer and other varieties such as Arlington, Serala, Gasyn, Interstate, Cericea, Appalow, Serala 76, Interstate 76 and AU Donnelly available elsewhere or by import. 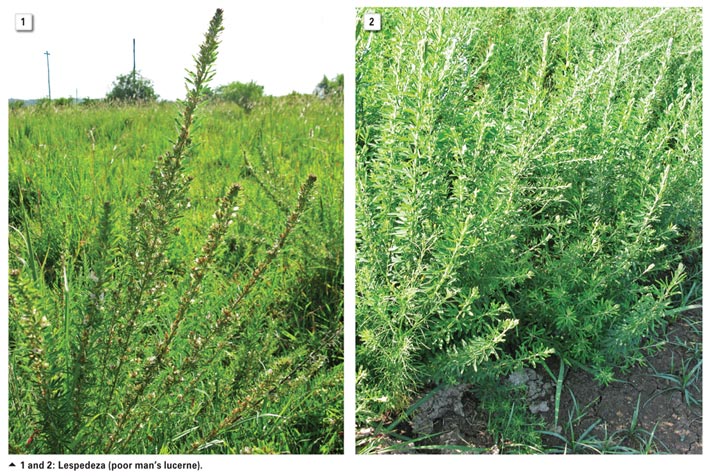 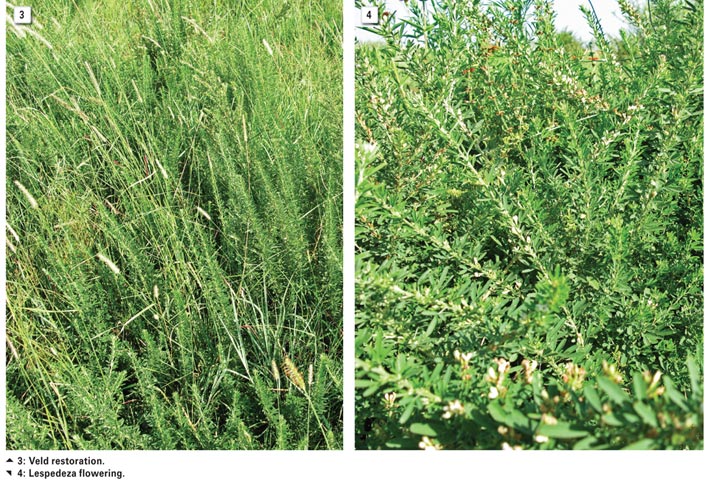 Lespedeza requires a temperate climate with a summer rainfall and grows well in an area that receives 650 mm and more of rain. It is sensitive to frost which kills off above-ground growth. It grows vigorously from spring to autumn and when frost is absent, it grows well over winter too.

Lespedeza is also resistant to certain diseases, although susceptible to root knot nematodes on light textured soils with not many reports of attacks by insects. The mature plants are competitive with grasses. This species is also much more tolerant of acidic and low fertile soils than most other legumes. It is mostly productive on deep, well-drained and fertile soils.

Even though Lespedeza is a legume, it has a low nitrogen fixation rate and has little effect on the soil nitrogen. Lespedeza is known to have a deep root system which contributes to its drought resistance. Besides the use as forage, the soil conservation qualities are outstanding and it is commonly used to remediate degraded areas.

Lespedeza is known to establish slowly as its main growth focus is root development initially. When establishing Lespedeza, it is important to be patient with this pasture crop as it is known that Lespedeza is dormant during the first year, starts growing in the second year and takes off the third year.

This species is normally planted in spring at a seeding rate of 20 kg/ha – 30 kg/ha into a fine and firm seedbed.

It must preferably be planted in rows 400 mm – 900 mm apart. It is advised that the seed is planted when the soil temperature is in the range of 25°C – 30°C, as this promotes the best germination.

The best planting time is from November until the end of January at a maximum depth of 5 cm and never above the soil. The plant has very low seedling vigour and is therefore advisable to be planted in pure stands. Weed control is imperative and if weeds are controlled well, the time from planting to first utilisation can be reduced. It is also very important that the seed to be planted is inoculated properly as this will facilitate the valuable process of nitrogen fixation.

The excellent hay properties of Lespedeza include the fine stems that do not contain much moisture, and new improved varieties have a high proportion of leaf at the correct harvesting stage. These leafy stems cure quickly and can be cut, dried and baled on the same day if the climatic conditions allow for this. It is of utmost importance that Lespedeza is not dried too much, as this will result in significant leaf loss during the drying and baling process. If Lespedeza is preserved properly, it can be expected that 55% – 65% of leaf material will be captured.

The Lespedeza crop can be used by either cutting it for hay or grazing it. The palatability and forage intake of the high-tannin species are higher for hay than for fresh forage with new varieties. Attention should be given that when Lespedeza is cut for hay, it should be between 300 mm – 400 mm, because if the stems break easily when bent, the crop is too mature to make high-quality hay. To harvest the crop at a more mature stage will provide much higher yields, but at the expense of less leaf and lower quality. It is also advised that 100 mm – 150 mm of stubble is left after each cutting to ensure speedy regrowth.

Management of this species should be aimed at keeping the plant to grow vigorously. When this crop is used for grazing it is essential to rotationally graze the plants when they are 150 mm to 250 mm tall. If this crop is left to grow out taller than 350 mm the chances of having forage with high quantities of tannin are high.

As Lespedeza grows in a dense stand it has the benefit of having a good cover and that it prevents soil erosion. Over and above its ability to protect the soil from eroding rains in summer, it has the added value of a legume by contributing to the nitrogen and organic matter status of the soils, improving the soil fertility.

It has also been reported that when Lespedeza is incorporated into the soil as a green manure crop, the succeeding crops will benefit tremendously from it. In no-till conditions, the crop can be used as a ley crop and killed by herbicides before establishing a cash crop such as maize.

The well-known deep and vigorous root system of Lespedeza is the most respected contribution to improved soil condition, especially over the full life-cycle of the legume crop.

Harvesting and utilising Lespedeza at the correct stage is a management challenge in its own right. The next challenge entails the drying of the harvested material to prevent significant leaf loss which determines the final forage quality.

Since Lespedeza is a perennial crop, seed production is not always necessary to maintain the stand. It can be advised that the crop will last longer if you do allow the crop to grow out after at least two harvests and to allow the root system to build up sufficient reserves to ensure fast regrowth in the new growing season.

When planting Lespedeza, a few challenges exist with preconditioning the seed before planting. Scarification of the seed is necessary to ensure good germination. Reports have shown that dehulling the seed results in better germination and seedling viability. It must also be remembered that the seed needs to be inoculated and when this process has been done, that the planting of inoculated seed is conducted when the soil conditions are suitable for bacterial growth on the root system.

Tannin is probably the most concerning compound that is responsible for low quality roughage and ultimately poor animal production. The tannin however is responsible for the non-bloating characteristic of Lespedeza, but also decreases the digestibility and palatability of the roughage. Lower tannin varieties do exist and have improved forage quality. The protein content can vary between 10% – 16% under dryland growing conditions. With hay yields of up to 8 tons/ha being recorded, the window of opportunity however when grazed, is small to achieve optimal utilisation of the pasture crop in field.

Research has also shown that the tannin has caused a significant decline in faecal egg count of gastrointestinal parasites of ruminants, which reduces the effects of parasitic nematodes on animal health and to lower pasture contamination.

Lespedeza is a leguminous pasture crop with some very valuable properties. From an animal production perspective, the management required to optimally utilise the crop is important. The species however, has the ability to utilise very poor quality soil and then provide valuable forage of good quality.

During this period of establishing, growing and the stage of utilisation, the species is also contributing significantly to a renewed soil condition. This includes the build-up of nitrogen and organic matter as a result of a vigorous root system. Like many pasture species, the quality of the pasture crop lies in the correct time of harvest through mowing and/or grazing.