Home COLUMNS Learn to listen and listen to learn

The Dalai Lama once said, ‘When you talk, you are only repeating what you already know, but if you listen, you may learn something new.’ The mentors who are part of the Grain SA Mentorship Programme know how important it is to convey information regarding correct agricultural practices, but if they just talked and never listened to what the farmers had to say, very little progress would be made.

Challenges, changes and growth
According to Lunga Mhlonyane (30), a junior mentor based in Matatiele in the northern parts of the Eastern Cape, a mentor not only needs to have good communication skills, but must also be a good listener. Other qualities he deems important for mentoring include good organisational and planning skills as well as leadership. ‘A mentor is someone who has to be able to multitask. Apart from planning and presenting study groups, you have to communicate on the farmers’ level – answering questions when asked, whilst making sure that you don’t lose track of the time. After a day in the field, you have to put your administrative hat on to ensure that all records are kept up to date.’

Lunga, who has a background in horticulture and obtained his diploma from the Cape Peninsula University of Technology in Cape Town in 2012, joined the Grain SA team in 2017 as an intern under the guidance of Luke Collier, development co-ordinator in Kokstad.

He graduated as a junior mentor in September 2018 and is very excited to be part of the programme. He works in the Alfred Nzo district where he meets up with his two study groups, consisting of 64 farmers, weekly on Tuesdays and Fridays. On Mondays, Wednesdays and Thursdays he accompanies his supervisor, Lourie Janse van Rensburg, on farm visits. In this way he gets guidance from Lourie and gains more information about the practices that he hasn’t yet mastered. 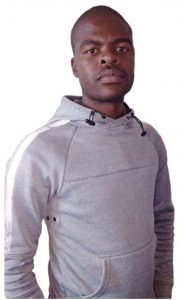 His groups mainly consist of farmers over 40 years of age. Lunga has found that many of these farmers were raised in a rural family. With little or no passion for farming, they then went looking for jobs at the mines or in urban areas. At some stage they realised that agriculture was something that could change their lives for the better. However, after returning to the farm they found that old practices were no longer advisable and that they needed guidance to make a success of farming.

The mentoring experience has been one of personal growth for Lunga. He feels that both his communication skills and his knowledge of human nature have improved tremendously. He says that he can ‘read’ his farmers and knows when something is bothering them.

Lunga loves being part of a programme that brings about change in the lives of not only the farmers but of their families too. Currently he still makes use of public transport to the rural areas, but looks forward to the day that he owns a vehicle that can handle these roads.

Progressing one day at a time
Although he has only been involved in the programme for one full season, Lunga has discovered that a little progress each day adds up to big results. Farmers have shared their success stories of how their yield has improved from 1 t/ha to 4 t/ha and even to 5 t/ha. ‘Farmers are really taking to heart what is being shared at the study group sessions. Some are excelling – like one farmer in the Black Diamond village who harvested 6 tons on a single hectare.’

These farmers needed the most guidance in the following three areas:

Unfortunately, as in so many of the rural areas, one of the biggest challenges faced is that the land does not belong to the farmers. This makes it even more difficult to establish new agricultural practices. ‘The farmers put in so much effort and hard work and when the owner sees production is going well, he suddenly has a desire to farm and wants his land back.’ He says that this can easily discourage the farmers, as no one wants to have to start a farming enterprise from scratch every few years.

At the onset of his involvement, Lunga discovered that attending the study groups and hearing the advice did not necessarily mean that it was being put into practice. ‘Perhaps it’s a cultural thing where everyone follows the example of the older generation,’ he says. ‘Some of the older farmers still believed their methods worked better.’

Fortunately, the difference in the crops of those who did what was recommended – like applying urea and spraying the crops – and those who didn’t, was so distinct that it served as motivation to put the advice into practice. As Thomas Jefferson, the third president of the USA said, ‘To learn, you have to listen. To improve, you have to try.’