I recently became aware of an anomaly (contradiction) that awakened a certain emotion in me. I read about important opinion formers in society who, as ‘experts’, write about how we as agriculturists use the most water. Another consumer wants to know how much water we as producers used to produce food for them.

At one of the events where this question was asked, the master of ceremonies stated candidly in front of a select group of grain producers that her knowledge of agriculture was limited to her young son’s toy tractor.

The other side of the anomaly I realised was the total overload of videos and messages telling the world about the water crisis that is affecting our producers. We read about and see dams that last had water in 2016, boreholes that dry up, orchards and crops that wither, sheep that die and springbok rams (in the middle of the Rugby World Cup no less!) that can no longer get up. People are tired of waiting for relief day after day – and even year after year. I hear of producers and non-producers on a mission who use their own time and money to help other producers – because they know how powerless one feels when everything has dried up.

My question today to the government and the consumers in our country is: Don’t you understand what producers do with water? We take the water we receive (by grace alone) plus the soil and inputs and we convert them into the food you eat every day. We own the soil (or so we believe), but the water is by grace from above. 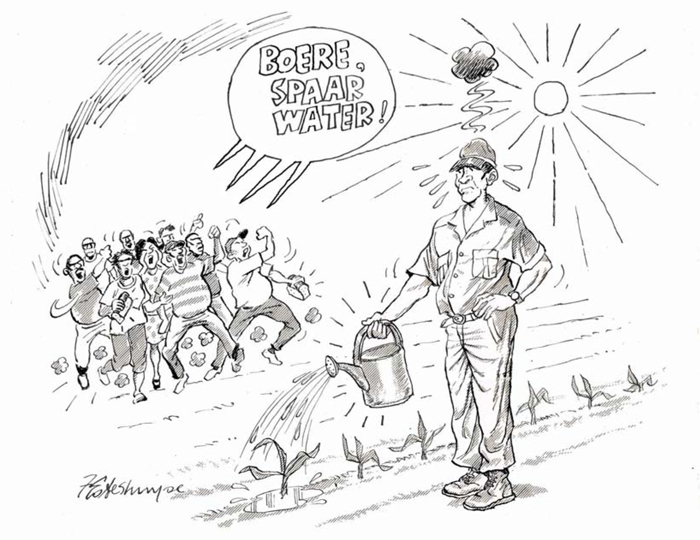 We do not ask for help or understanding for the things we as producers can control and manage. All we ask for is a little understanding for the things we cannot control – the rain. We choose to farm. We choose to work with nature to produce food for the country – no matter how difficult this sometimes is. However, like King David in the Bible, we also choose to be at the mercy of God rather than that of the enemies of the world. Enemies like corruption, crime, greed and violence.

To our government and consumers, we very respectfully request more understanding: We do not control the rain. Yes, we know Him who provides the rain, but people’s condemnation and suspicion about how we utilise it in the process of producing their food – that is uncalled for. We all benefit from the fact that we produce food for the country. Is it then asking so much to assist producers with insurance from the joint tax pool of funds during those times when the rain does not come?

Of course you are entitled to ask how we use the water in the process of producing food. The fact is that our grain producers perhaps do not always produce the highest tonnage per hectare in the world – because of climatic conditions. And yet, the world cup for producing the most kilograms of maize per millimetre of rain received, has been standing in Grain SA’s glass cabinet in Pretoria for a number of years. This is how we go about with water received by grace! #ImStaying.