The fall armyworm (Spodoptera frugiperda) has now been present in South Africa for three cropping seasons. This pest has its origin in the tropical and sub-tropical areas of South America and the most southern states of the USA.

Since the fall armyworm was first reported in South Africa in January 2017, it has spread to India, the Far East and most recently to Egypt from where it threatens maize crop production in Europe.

Although the fall armyworm is capable of feeding on approximately 350 different plant species, the African population of this pest is largely only important on maize and sorghum. Limited damage has been reported on rice, sugarcane, soybean, millet and cotton.

Crop loss due to fall armyworm damage in African countries with warmer climates where pest populations persist throughout the year, is significantly higher than in South Africa. Fall armyworm has been reported to potentially cause combined maize yield losses of between 8 million and 27 million tons per annum in twelve Central and East African countries.

Fall armyworm pest status in South Africa
The status of a migratory and tropical pest such as fall armyworm is largely determined by the ability of pest populations to persist in maize production regions throughout the year and to survive the winter. Pest status outside of the areas where fall armyworm occurs permanently is determined by the migration patterns of moths and climate suitability for survival.

Fall armyworm moths have both a long-range migratory habit and a more localised dispersal habit. In the migratory habit, moths can migrate over 500 km before oviposition. Depending on wind patterns moths can travel much larger distances – up to 1 000 km.

The risk of pest infestation and management strategies differ in different scenarios such as areas where sporadic infestations occur, plant growth stage at time of infestation, and whether the infestation is on seed production or commercial fields. 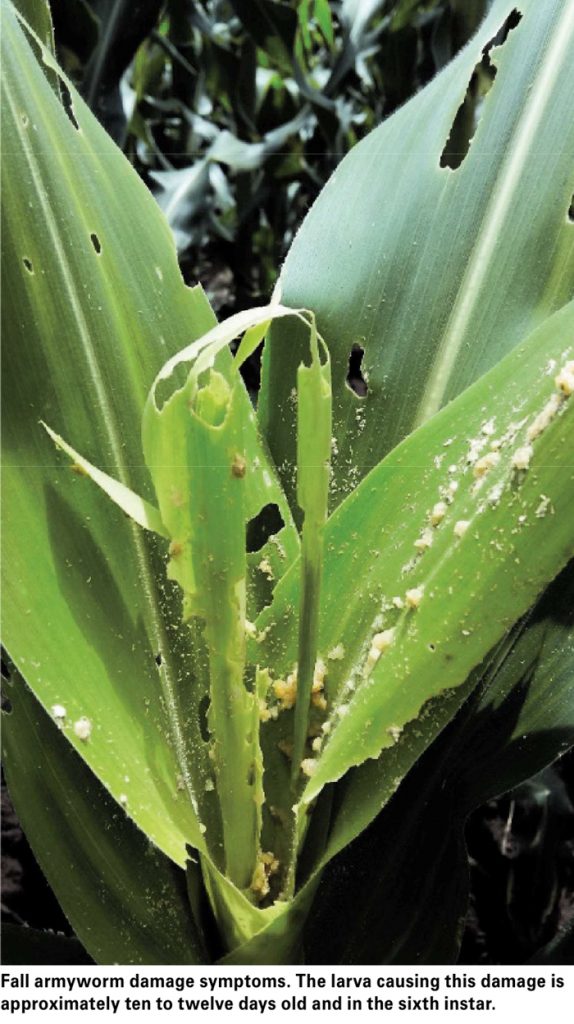 Effect of temperature
Since it is known that fall armyworm does not have a diapause stage by means of which it can survive the harsh winters in the South African Highveld region, research was conducted to determine the effect of different temperatures on fall armyworm development and survival. This is used to predict areas where it may establish in South Africa and indicate areas where it may only be of sporadic occurrence.

At high summer temperatures of 30°C – 32°C fall armyworm eggs hatch within two days and larvae develop into pupae in ten to twelve days. At 18°C eggs take six to seven days to hatch and the larval development period is extended to between 28 to 37 days.

The number of generations that can attack a specific crop (up to eight generations in tropical areas) therefore varies between regions. The pest status of fall armyworm on maize in South Africa differs between the Lowveld region, Highveld region and other areas such as the Eastern and Western Cape provinces where sporadic infestations are expected late in the cropping season.

Producers need to stay alert
Since it is possible for fall armyworm to survive mild winters, its pest status may in future become higher in temperate areas. The regular occurrence of fall armyworm on maize in the East London area and reports of minor infestations in maize in the Clanwilliam area of the Western Cape indicate that although pest attacks in these regions may be of sporadic nature, maize producers need to stay alert during the cropping season and regularly monitor their maize fields for the presence of this pest.

To predict the areas that are suitable for fall armyworm populations to persist in South Africa and to identify areas to which moths may migrate to and cause sporadic pest outbreaks, a CLIMEX programme was used, based on research on pest development in relation to climate variables (Figure 1). Areas where permanent populations can occur are indicated in yellow to red while areas where sporadic and seasonal infestations may occur are indicated in green. Field observations indicated that permanent populations of fall armyworm, as predicted with the CLIMEX model, can establish in the Lowveld region of South Africa, northern parts of the Limpopo Province as well as the coastal areas of KwaZulu-Natal and the Eastern Cape. Infestation in other areas will therefore be as a result of migrating moths and will be sporadic.

Current studies on temperature thresholds for survival of this pest suggest that it may be more tolerant to lower temperatures than expected, which will mean that the overwintering sites may be more expanded than indicated with this model. The increased risk of pest attacks by populations that establish in other areas in South Africa is currently being investigated and will result in more accurate predictions of where the pest may reach pest status and areas that may be more regularly invaded by migrating moths.

Chemical control of fall armyworm
The rapid and unexpected nature of fall armyworm infestations resulting from migrating moths provide challenges to effective chemical control applications. The window of opportunity for effective control is very short due to the fact that infestations are often not observed before plants exhibit advanced levels of leaf damage, caused by large larvae that are difficult to control.

This is due to the initial cryptic feeding behaviour of larvae inside plant whorls and because the damage caused by small larvae (instars one to three) during the first seven-day period is largely hidden inside the whorl. From the fourth instar onwards, however, the growth rate and feeding of larvae increase rapidly and severely damaged leaves can be observed.

Damage symptoms
The rapid appearance of damage symptoms frequently leads to indiscriminate spraying of pesticides, often without regard to whether chemical control is necessary or effective. Assessing fall armyworm infestation levels by means of scouting for damage symptoms prior to insecticide application is important.

The number of moths captured in pheromone traps cannot be used as a threshold level for decision-making on whether or not to apply insecticides. It can, however, indicate the presence of fall armyworm moths in an area.

Once moths are recorded in these traps, scouting should commence to provide an indication of the level of pest infestation in a particular maize field. Without information generated through monitoring, surveillance and scouting, no informed decision can be made by either producers or extension officers regarding pesticide application.

Known to develop resistance to insecticides
The application of pesticides for fall armyworm control should be guided by integrated pest management principles. The misuse and indiscriminate spraying of pesticides can have serious adverse effects on the environment, human health and the natural enemies of this pest. Fall armyworm is also known to develop resistance to insecticides which is often also a result of misuse and indiscriminate spraying.

To keep fall armyworm populations below economically important levels in areas where the pest persists may require frequent insecticide applications. In such cases it is important to make use of insecticides with different modes of action, in order to delay resistance development.