Pythium root rot of wheat and barley is caused by several species of Pythium and occurs in most wheat and barley growing areas, but is often misdiagnosed. This fungus belongs to a group of fungi known as the oomycetes and is common in all cultivated soils. The fungus can live in the soil on crop debris or as hardy oospores for a long time.

Once a suitable host plant as well as adequate moisture and climate are present, the oospores become active and produce zoospores that will infect plant tissue. Pythium spp. has a preference for juvenile tissue and hardly ever causes decay of mature plants.

Pythium spp. infects the very young wheat and barley germinating seeds and uses the sugars stored in the endosperm as food source, thus weakening the seedling. This infection can lead to the stunting or destruction of the seedlings (www.apsnet.org/publications, Phyto77n08_1192).

Because this infection takes place at a very early stage, it is not always recognised. Poor germination and emergence can be attributed to other causes such as poor-quality seed or other soil-borne diseases such as Rhizoctonia spp. or Fusarium spp. Infected seedlings have a much-reduced root system and this can have a negative effect on water and nutrient uptake and eventually reduce yield.

One of the best ways to achieve this early protection is by treating the seed with a seed treatment product that will prevent infection of the germinating seed, protect the emerging seedling for a period thereafter and produce a strong and healthy root system (Photo 1a and Photo 1b).

Compounds such as mefenoxam are specifically formulated to control oomycete fungi and are effective in preventing infection by Pythium spp. The Syngenta product, Dividend® Extreme contains two active ingredients (23 g/l mefenoxam and 92 g/l difenoconazole) which provide wide spectrum protection, not just from Pythium spp., but several other soil- and seed-borne pathogens and diseases. Mefenoxam is highly systemic and will be absorbed by the germinating seed to provide protection of the young seedling in sandy and clay soils (Photo 2a and Photo 2b).

The best strategy against Pythium root rot is preventative action and this can be achieved by using a reliable seed treatment such as Dividend Extreme. 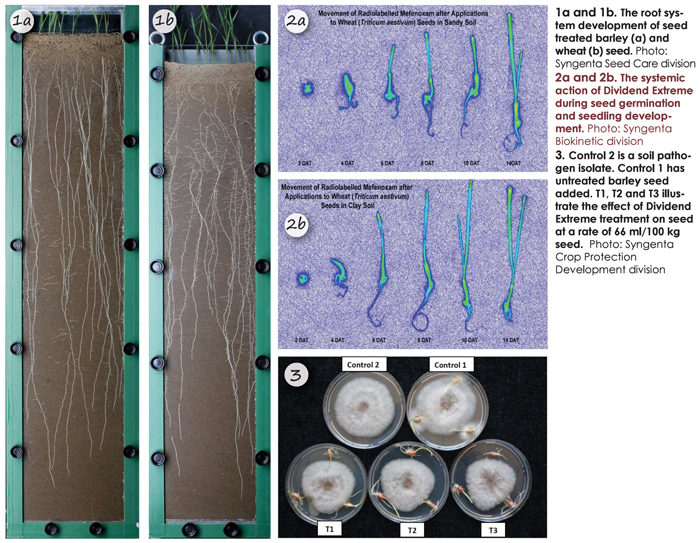 Supporting students through funding and networking

Mentoring is about going the extra mile