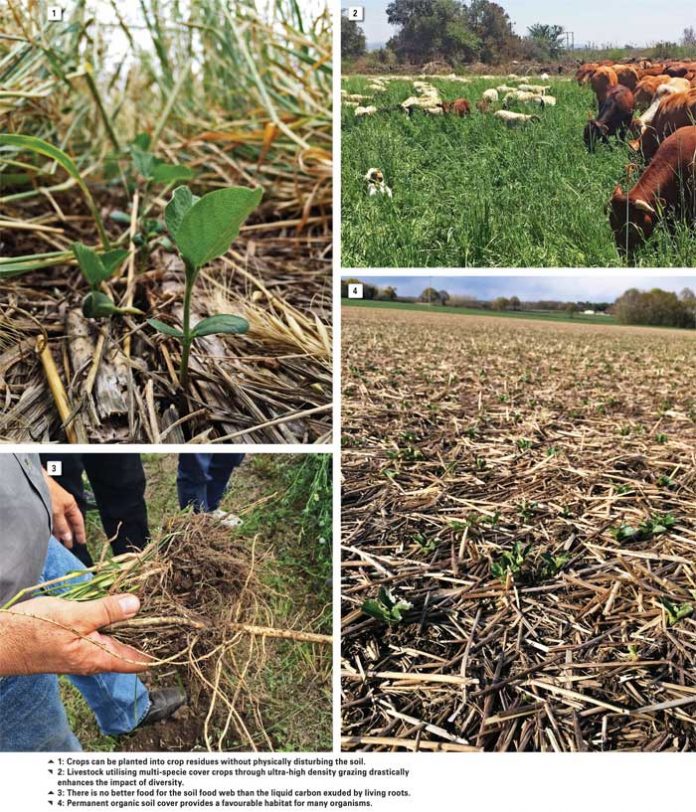 In South Africa, crop production systems based on intensive and continuous soil tillage have led to excessively high soil degradation rates with a reduction in natural soil fertility in areas under grain production. It also results in the consistent recommendation of the use of huge quantities of chemical fertilisers that are biologically unnecessary, economically extravagant and ecologically damaging.

Tillage results in the oxidation and destruction of carbon in the soil by increasing the soil oxygen levels, thereby promoting bacteria populations to expand and consume active carbon in the soil. Soil organic carbon, or soil organic matter, is the key element that drives soil health, which in turn is the primary factor having an impact on sustainable crop production.

If sound farming practices are sustained over time, soil health improvement could significantly escalate, influenced by positive changes in a wide spectrum of soil parameters, including soil fertility, which then result in improved productivity and profitability of farming systems.

There is general agreement among key stakeholders in South Africa, that soil health and sustainable crop-livestock production will only be achieved through the adoption and implementation of conservation agriculture (CA) principles and practices.

CA is seen as an ideal system for sustainable and climate-smart agricultural intensification and regeneration, through which producers can attain higher levels of productivity and profitability, while improving soil health and the environment.

One of the good agricultural practices associated with CA is integrated soil fertility management, which essentially depends on locally adapted CA principles and practices to build-up soil health, allowing producers to reduce the use of fertilisers, while sustaining good and stable yields and increasing profitability.

This understanding is important if we wish to sustain productivity at the lowest possible costs, both economic and ecological.

Without being able to go into details, this article aims to provide a few principles, advantages and examples of integrated soil fertility management.

The concept acknowledges that neither practices based solely on mineral fertilisers nor solely on soil ecosystems services are sufficient for sustainable crop production, especially during the transition years after starting with CA on degraded soils.

It also requires well-adapted, disease- and pest-resistant germplasm, as well as other good agricultural practices. The critical soil ecosystem processes involved are transformations of carbon, cycling of nutrients, maintenance of the structure and fabric of the soil and biological regulation of soil populations.

CA principles and practices enhancing integrated soil fertility management
Many producers world-wide have achieved large improvements in soil health in a relatively short time. What are these producers doing differently?

Minimum soil disturbance
Physical soil disturbance, such as tillage with a plough, disk, or chisel plough, that results in bare or compacted soil is destructive and disruptive to soil microbes and creates a hostile, instead of hospitable, place for them to live and work (Photo 1).

The soil may also be disturbed chemically or biologically through the misuse of inputs, such as fertilisers and pesticides. This disrupts the symbiotic relationship between micro-organisms and crop roots. By strategically reducing chemical inputs, we can take advantage of these soil ecosystem services to allow plants to freely access essential nutrients.

Diversify with crops and animals
Sugars made by plants, through the miracle of photosynthesis, are released from their roots into the soil as liquid carbon and traded to soil microbes for nutrients to support plant growth. This soil ecosystem service is a vital element of healthy soils and can be enhanced through the inclusion of as many different plants and animals as practical. Livestock utilising cover crop mixtures, for example, contribute to this diversity.

With ultra-high-density grazing utilising 30% to 50% of available material, livestock can stimulate root development and recycle 80% of nutrients in the form of dung (Photo 2). Biodiversity directly leads towards a diverse array of soil microbes from a range of functional groups, which again improves the soil’s ability to support nutrient dense, high vitality crops, pastures, fruit and vegetables. 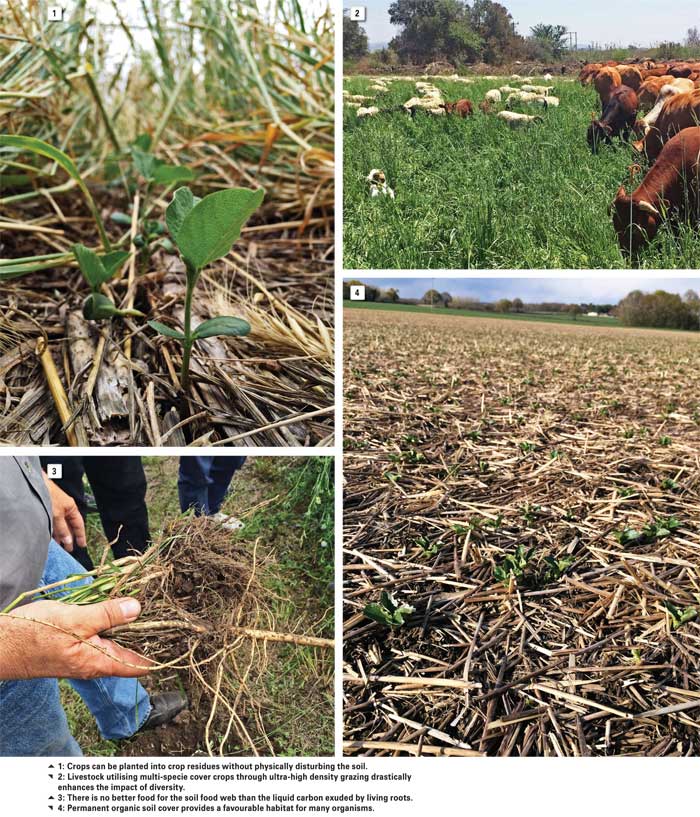 Biodiversity is ultimately the key to the success of any agricultural system. Lack of biodiversity severely limits the potential of any cropping system and disease and pest problems are increased. A diverse and fully functioning soil food web provides for nutrient, energy, and water cycling that allows a soil to express its full potential.

Grow living roots throughout the year
There are many sources of food in the soil that feed the soil food web, but there is no better food than the liquid carbon exuded by living roots (Photo 3).

Soil organisms feed on liquid carbon from living plant roots first. Next, they feed on dead plant roots, followed by aboveground crop residues, such as straw, chaff, husks, stalks, flowers and leaves. Lastly, they feed on other organisms lower in the soil food web.

Healthy soil is dependent upon how well the soil food web is fed. The provision of plenty of easily accessible food (liquid carbon) helps soil microbial communities to colonise and recycle nutrients for plants to grow. The functioning of the soil ecosystem is therefore determined by the presence, diversity and photosynthetic rate of actively growing green plants and roots.

Cover crop mixtures produce root exudates with varying composition and effects, and have different zones of nutrient uptake, because they differ in amount, depth, and patterns of root branching.

Permanent organic soil cover
Soil should always be covered by growing plants and/or their residues and soil should rarely be visible from above. A mulch keep the soil cool and moist which provides favourable habitat for many organisms that begin residue decomposition by shredding residues into smaller pieces (Photo 4).

Carbon transformations
The decomposition of organic materials into simpler molecules is one of the most important ecosystem services performed by soil organisms. Decomposition is also defined as the mineralisation of carbon; 90% is carried out by micro-organisms such as bacteria and fungi greatly facilitated by soil meso and macro fauna that fragment residues and disperse microbial propagules.

Nutrient cycling
The cycling of nutrients is a critical ecosystem function that has positive direct impacts (through plant-microbial symbiotic relationships) on crop yield due to increases in plant available nutrients, especially nitrogen (N) through biological nitrogen fixation by soil bacteria (e.g. Rhizobium) and phosphorus (P) through arbuscular mycorrhizal fungi.

As said above, it literally means that these micro-organisms release nutrients to the roots in exchange for carbon to feed on, either from root exudates, or from plant/root organic material. Increasing populations of bacteria and fungi provide more food for protozoa (feeding on bacteria) and nematodes (feeding on bacteria, fungi, protozoa, other nematodes and roots) and their waste (manure) is directly available to plants as nutrients.

On a global scale, biological nitrogen fixation accounts for around 65% of the nitrogen used by crops and pastures. There is scope for considerable increase. The supply of nitrogen is inexhaustible, as nitrogen comprises almost 80% of the earth’s atmosphere.

Most soils in South Africa contain low amounts of soluble phosphorus due to the parent material and/or P being fixed in acid soils. However, if levels of arbuscular mycorrhizal fungi colonisation are high, there will be no need to add large quantities of inorganic P, or in some cases, none at all. The additional plant diversity and growth period obtained with cover crops promote root proliferation and activity, stimulate a greater variety of soil micro-organisms and enhance carbon and nutrient cycling. The soil surface is covered for a longer period of time during the year, so nutrient losses from runoff and erosion are reduced.

This longer period of plant growth substantially increases the volume of plant biomass produced, which in turn increases organic matter additions to the soil. It also traps excess soluble nutrients not used by the previous crop, prevents them from leaching, and stores (recycles) them for release during the next growing season.

Nutrients provided by CA and enhanced ecosystem services
Table 1 illustrates the amount of nutrients potentially available to the next crop through CA and various soil ecosystem processes – only N, P and K are included. As an example, an average dry matter (crop residue) quantity of 12 t/ha (typically produced by a mixed summer cover crop) was used, a soil depth of 10 cm, a soil organic matter of 2,5% and soil bulk density of 1,3 g/cm3.

The nutrients available to the next crop in the example illustrated in Table 1 are freely supplied by the soil ecosystem functions and services that have been influenced by the CA system; these nutrients are valued at R8 315. This value will increase as CA practices are optimised, soil organic matter have increased and other soil ecosystem services have improved (such as soil microbial recycling of nutrients). To shorten the transformation period of restoring these functions (e.g. in a degraded soil), quality CA practices are needed that will speed-up the biological process and time. In wetter areas with clay soils this could take three to five years, but in warmer areas with sandy soils, it could take longer.

In Part II of this article (on page 26) a case study from Ottosdal, North West Province will be discussed.