Home FOKUS Efficacy of entomopathogenic nematodes for control of cutworms

Entomopathogenic nematodes (EPNs) are naturally occurring round worms, which live in a symbiotic rela tionship with highly specialised bacteria capable of causing mortality in an insect host within 48 hours. They are exploited globally for safe and environmentally friendly biological control of insect pests. Hence, their successful application in developed countries has proved their effectiveness.

Negative issues associated with chemical pesticides (namely development of resistance, human and animal health risks and detrimental effects on the environment and non-target organisms) have led governments around the world to develop policies to regulate the use of these chemicals and seek alternatives.

In South Africa, the Pesticide Management Policy (APAP 2014 – 2019), Agricultural Policy Action Plan and the Bio-economy Strategy encourage climate-smart agriculture, the development and use of alternative products and techniques to reduce the dependence on chemical plant protection products.

It is for these reasons that scientists around the globe are conducting research to develop EPN-based bio-pesticide products. Such products hold a number of advantages, including: No record of acquired or developed resistance against entomopathogenic nematodes, safety towards mammals, non-target organisms and the environment, sustained control due to a durable infective juvenile (IJ) (non-feeding) stage, host-seeking abilities, persistence in soil, rapid rate of insect mortality (48 hours), compatibility with chemical pesticides and exemption from registration in many countries.

Of many agricultural crop pests, cutworm species are cosmopolitan pests threatening a number of agricultural crops globally, feeding on many important grain crops and nearly all vegetables. They belong to a species of night-flying moths (order Lepidoptera, family Noctuidae).

Variegated cutworms also have a row of yellow spots down the back. Identification of cutworm adult moths may be difficult without the assistance of a crop specialist or trained entomologist. Cutworm moths are generally dark grey-brown moths with varying mottled patterns or spots on their forewings. Most species have grey-brownbuff hindwings.

Recognising damage from cutworms is relatively simple when plants are small. Seedlings are often ‘cut’ off at ground level and if the soil around the plants is dug up to a depth of about 5 cm, the characteristic cutworm larva can often be found. Cutworms feed at night and will generally not be observed on plants or on the soil surface during the day.

The success of nematode applications depends largely on the biology and ecology of both the nematode and the pest, which should be well understood. EPNs are more effective in habitats that protect them from extreme environmental conditions such as UV, high temperature and drought, hence their natural habitation in soil. EPNs are therefore preferred as control agents of soil-borne insects or insect species that spend at least part of their life cycle in the soil. The cutworm is a suitable candidate for targeting with EPNs since it spends both the larval and pupal stages in the soil.

Several international studies have shown moderate to high EPN virulence to black cutworm. However, in South Africa, no study has been conducted to determine the efficacy of indigenous EPNs against this pest. The ARC-Small Grain Institute (ARC-SGI) conducts research to develop EPN-based bio-insecticides. 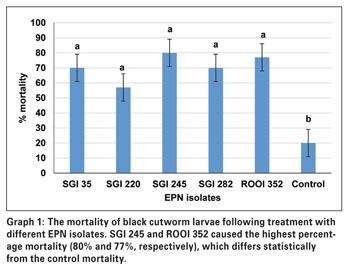 Several species of EPNs were tested for control of the black cutworm and the results indicated that two indigenous species from the ARC-SGI EPN collection, SGI 245 (Heterorhabditis) and ROOI 352 (Steinernema), hold great potential for control of the black cutworm, causing 80% and 77% mortality, respectively (Graph 1). These two species will be tested further in glasshouse pot trials to determine the lethal dose followed by field trials.

EPNs can be easily and conveniently applied using spray equipment for chemicals and through standard irrigation systems. Nematodes should never be exposed to high temperatures (above 35°C), and therefore applying nematodes in the morning or late afternoons is advised.

Post application irrigation is recommended to facilitate EPN movement into the soil before desiccation of spray droplets and/or exposure to harmful UV irradiation. Although nematodes are generally applied as curative treatments, prophylactic applications to the soil before planting have been promoted. The infective juvenile of EPNs has proven to be compatible with many insecticides, nematicides, herbicides, fungicides, fertilisers, growth regulators, surfactants, pathogens, parasitoids and predators. Such compatibility, therefore, supports their integration into integrated pest management (IPM) programmes.

Currently, research at ARC-SGI is focused on upscaling mass production of EPNs and formulation of a prototype product for control of several insect pests.

For more information regarding the use of EPNs, contact Dr Tshima Ramakuwela on 058 307 3400 or ramakuwelat@arc.agric.za.