It will be a sad day if South Africa ever discards merit and rationality for the sake of political correctness. I say this because we daily experience more pressure at the level of organised agriculture to ignore facts and merit and make decisions merely on the basis of politics. One could also perhaps replace the word politics with populism.

If the market bases its decision to purchase goods and services and make investments based on profit and performance, every book on theory says that it is the best way to allocate resources (land, labour, capital and entrepreneurship). It is this fundamental principle that accomplishes growth in an economy. We hear almost daily at the Zondo Commission how the state (and even the private sector) allocated millions of rands under their control, while those decisions were not based on this principle of merit. The result? An economy that is looking for a parking space rather than starting blocks.

Our challenge is to retain merit as a value in our sector and the community. It affects our grain producers directly when a decision has to be made about where to utilise the limited funds in agriculture. Funds for research, to help new producers to produce at commercial level and to collect and publish market information. In our meetings, merit is often weighed against transformation. This is simply wrong. Merit says something about who can carry out the function the best and will provide value for money. As soon as other factors are added to the mix, it spells the beginning of waste and a lack of competitiveness. When an economy like that of South Africa at present struggles to grow, it is the last thing one would like to see. The wrong employment of funds for conducting research and improving technology makes producers less competitive immediately – because other countries can do it better. Over time we become isolated and decline lies in our future. The employment of funds for the roads in our country is also a very good example in this regard. Maintenance can be postponed only up to a certain point before we end up at a place where replacement – at a much higher cost – is inevitable. 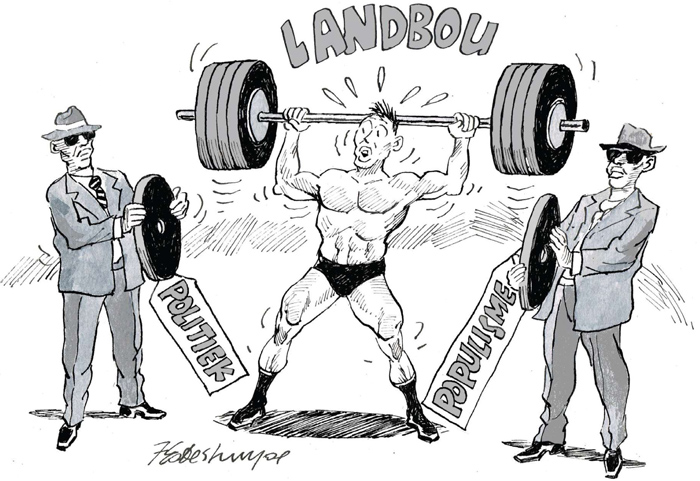 The other building blocks of a growing economy are the various institutions in a certain sector. As far as this is concerned, agriculture is very well off – but I cannot but raise a red flag here … Some institutions are there in name still, but the content leaves one cold. The public has very little confidence in SOEs like Eskom and the SABC. Similarly, our confidence in those who have to serve agriculture is waning. What I note, is that the market has little sympathy for poor performance and that alternatives appear very quickly. People see new opportunities and act on them. I have always placed a high price on a rapid response time. Regardless of many political statements, the market is still working … and that alone can maintain merit as a value.

However, one thing we in South Africa need not doubt, is that we are sailing in uncharted waters. We have never been in such an uncomfortable place. People are talking about the tectonic plates shifting under us – whether it is our healthcare or our pension money that are affected, or whether it is the ever­lasting crime wave that hits us daily. Yet there are many examples in the Bible that can help us to think clearly about these matters when the unknown overwhelms our thoughts. Remember this: God has never abandoned us or left us to fend for ourselves. Trust in Him!

A look at the seven wonders of grain production