The concept of sustainability, with the intention of ensuring humanity’s long-term well-being, drives many industries in today’s competitive world. The importance of sustainability, as the core competency of many corporate strategies, requires organisations and strategic decision makers to consider the three Ps (people, profit and planet), rather than to focus only on profitability for the success of their firms. Whilst food security remains a global sustainability challenge, post-harvest grain losses account for the majority of grain losses occurring in developing countries.

A total of 26 executives and senior managers of agri-grain firms in the grain handling, grain storage, grain processing and grain trading sectors as well as relevant non-profit organisations in the grain industry were interviewed. Two qualitative analysis approaches, namely summative content as well as thematic analysis, were applied in two phases to ensure a thorough analysis and to enhance the trustworthiness of the study. The results contributed to literature by ascertaining whether agri-grain businesses share a common understanding of corporate sustainability strategies whilst, in addition, the impact of enablers and inhibitors on the sustainability of the firms, and thus the grain industry as a whole, were identified.

The study also highlighted the importance of sustainability thinking when attempting to reduce post-harvest grain losses and support the Sustainable Development Goal of Zero Hunger (SDG2), as a global challenge. In an effort to aid industry business leaders, managers and stakeholders in their strategic decision-making, as well as the sustainability management and development of their firms, a model of sustainability for the grain industry was developed to support overall sustainability in this industry. The hope is that agri-grain firms’ pursuit of sustainability will consequently contribute to worldwide food security.

This article gives a brief explanation on the findings of the study and if or how the grain industry in South Africa is moving towards sustainability. It also recommends tools to help the industry to support the achievement of the SDG2.

The definitions and understandings mostly demonstrated that stakeholders’ management could not be fully controlled by business managers who formed part of the industry, due to various external, mainly macro-economic, and internal factors.

Profitability, serving customers and value-adding to customers, as well as the business’s growth or footprint expansion and diversification, were the main elements addressed by the economic dimension of corporate sustainability. The impact of strategies to cover the achievement of these elements were predominantly ascertained by measuring the bottom line, or profitability, of studied firms.

Secondly, elements covered in the social dimension, either in the definition of the informants’ understandings or the explanation of focused dimensions, mainly consisted of empowering the community of producers, the importance of people in their organisations and, lastly, job creation.

The impact of strategies, in regard to these elements, was measured through evaluation of the investment in societies and the performance evaluation of people in the studied firms. Lastly, adapting to the climate and care for the environment were covered to fulfil environmental sustainability which was measured mainly through various internal and external audits.

While triple bottom line reporting and risk management emerged as the approaches to measure the corporate sustainability strategies’ impact, the overarching macro-economic issues that influenced the understanding of these strategies and the focused dimensions were: The regulatory regime, the land issue in the country and the lack of established local infrastructure.

Enablers and inhibitors
The main dominant enablers, with regard to economic sustainability, included: Capital, finance, profitability of the firms, customers’ satisfaction and the significance of technology.

The inhibitors of the execution of economic strategies were: Financial issues, the increase in competition and the adaptability to new technologies. With a similar comprehension, having skilled people, believing in people as well as the importance of leadership and the culture of the firms, supporting producers and uplifting the community of producers and producing a quality product considering the food safety, were considered the dominant enablers of societal sustainability.

Moreover, the inhibitors of the social sustainability strategy execution were theft, scarcity of skilled people and the difficulty of adhering to too many rules and regulations. Whilst both the enabler and the inhibitor in the environmental dimension was climate, the overarching enablers with the impact on the three Ps consisted of: Policy certainty, professional grain management practices and the integration of the value chain as well as the established local infrastructure.

As a result, the overarching inhibitors were: The regulatory regime, specifically the land issue in the country, followed by the lack of professional grain management practices and the value chain disintegration.

Impact of reducing grain losses
Whilst most scholars confirm the positive impact of reducing post-harvest grain losses on the sustainability of agribusiness sectors, the findings of this study demonstrated various results from supporting literature fully to having no impact, which refuted the literature. Similarly, the finding for the challenge of reducing grain losses varied in various studied sectors. However, the dominant challenge fully supported the literature with regard to the importance of grain management practices.

All in all, it can be concluded that the most dominant impact of reducing post-harvest grain losses was the impact on the profitability of the studied firms, while the most overarching impact was the influence on the triple bottom line of the grain industry which supported the proposition of this study. The most dominant challenges, with regard to the reduction of post-harvest grain losses were: The issue of theft and the lack of skilled people on the social side, as well as the climate on the environmental side.

Moreover, the challenges on the economic side were mainly the cost of doing business and the access to technologies. Lastly, the overarching challenges for reducing post-harvest grain losses were: Government policies and regulations, lack of professional grain management practices and, lastly, difficulties regarding grain transportation.

The results confirmed: Less losses correlate with higher profitability and sustainability. It also demonstrated a clear dominance over other enablers in the South African grain industry context comparatively. This notion became explicit when informants expressed their concerns regarding the land issue, mentioning that if there was no land, and no agricultural production, how could the sustainability of the value chain be looked after?

All in all, it can be concluded that the impact of profitability and market growth, as well as competition and diversification, were more important than the reduction of grain losses under economic sustainability. Whilst the impact of skilled people, the culture of the organisation, and theft with regard to the social dimension, was more significant, the impact of the climate and biological agriculture was considered more important under the environmental dimension compared to the reduction of post-harvest grain losses.

Moreover, the main impacts consisted of: Government regulation and policy certainty, land security, grain management practices and technology and, lastly, the impact of the shortening of the grain value chain appraised as being more important comparatively.

Figure 1 illustrates the proposed model for sustainability in the grain industry. This model has been developed in consideration of the findings of the study and the main enablers and inhibitors of the implementation of the corporate sustainability strategies within the studied context. 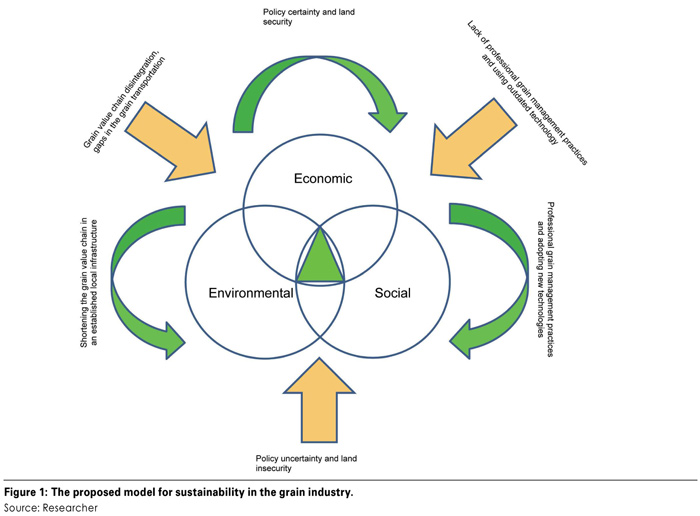 The overarching enablers and inhibitors impact the balance of the sustainability dimensions, or the core competence of the corporate sustainability strategies, which has been demonstrated as a green triangular in the centre of the model.

Therefore, the balance attained at the intersection of the dimensions is the main driver of sustainability within the industry, which is assumed to be positively interrelated to the reduction of post-harvest grain losses and other enablers.

Consequently, the three dominant enablers of sustainability in the grain industry, within the studied context, are demonstrated as green arrows. In contrary, the dominant inhibitors are depicted by yellow arrows which illustrate forces.

This study used post-harvest grain losses to explore the focus dimensions, the other enablers and the inhibitors and, in addition, the challenges that the agri-grain firms in South Africa are facing to reduce their grain losses. The findings resulted in the development of a model to support the sustainability of the grain industry. This research contributes to literature through an empirical study that clarifies the elements under each dimension of corporate sustainability and provides key insights into the various enablers and inhibitors that drive sustainability within agri-grain firms.

In the end, it is hoped that the proposed model will further contribute to sustainability management and development by the involved business leaders, managers and the stakeholders as they pursue the sustainability of their corporates in the grain industry.

On-farm storage – the road ahead