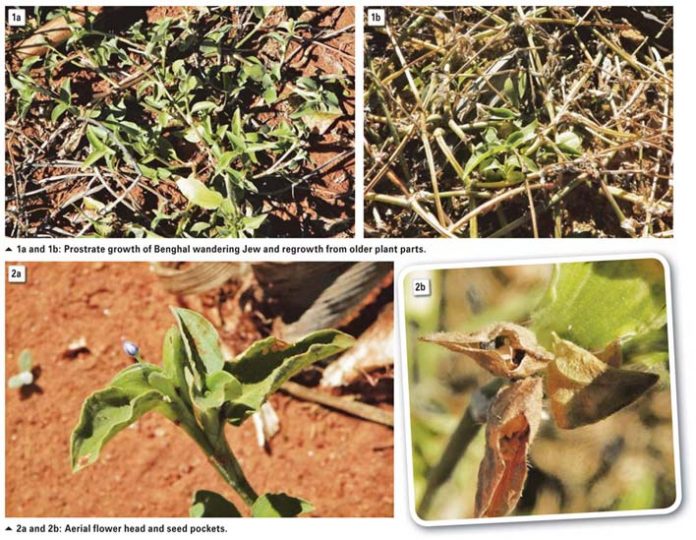 The Benghal wandering Jew, also known as the tropical spiderwort (Commelina benghalensis), is one of the world’s worst weeds reported in 25 different crops such as soybean, maize and sugarcane in 29 different countries (Holm et al., 1977).

This weed is a strong competitor with row crops for water and nutrients and can reduce cotton and peanut yields up to 60% and 100% respectively, through season-long interference (Webster et al., 2009). Infestation levels of wandering Jew has been reported to increase in crop production fields due to its resistance or high tolerance to many commonly used herbicides, particularly glyphosate (Owen and Zelaya, 2005).

Benghal wandering Jew has a prostrate growth habit (Photo 1a and Photo 1b) and can behave as a perennial in tropical zones or as an annual in more temperate zones (Wilson, 1981). 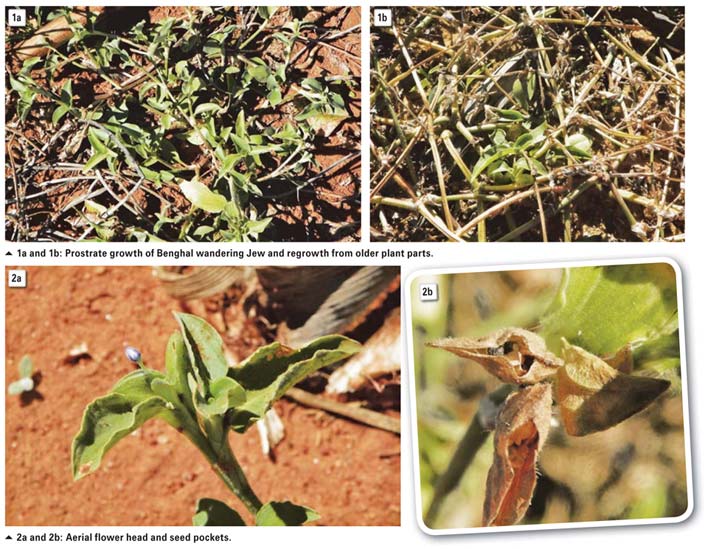 The small aerial seed has a greater dormancy compared to the larger seed (Budd et al., 1979). It has been estimated that one Benghal wandering Jew has the ability to produce 1 600 seeds (Wilson, 1981). Benghal wandering Jew is difficult to control due to its ability to reproduce in several ways i.e. with seed and vegetatively where rooting occurs at the nodes of stems (Photo 3a and Photo 3b).

It has been found in the USA, as is the case in South Africa, that Benghal wandering Jew has a high tolerance against glyphosate and can pose a serious problem since it is most commonly used to control this weed in glyphosate resistant maize and soybean cultivars (Culpepper et al., 2004).

Registered pre-emergence herbicides, which are most commonly applied to control Benghal wandering Jew in crops include active ingredients such as flumetsulam, acetochlor, atrazine, terbuthylazine, mesotrione, S-metolachlor and dimethenamid-P. Whereas active ingredients that can be applied post-emergence include bendioxide, mesotrione, glyphosate, tembotrione, 2,4-D, topramezone, dicamba, and bromoxynil.

These herbicides were applied postemergence (after weed emer gence) at two different growth stages namely when the weed had four leaves fully unfolded (V4) and at flowering. The following control standards were used in this study: Control between 90% and 100% indicated ‘acceptable, sufficient or effec tive’ weed control; between 50% and 89% indicated ‘reduced or suppressed’ weed control, and less than 50% weed control is totally unacceptable for producers indicating ‘insufficient control’.

All products applied at pre-emergence, effectively controlled Benghal wandering Jew (90% to 100%) 40 days after application, except where flumetsulam (800 g/kg) was applied. Flumetsulam (800 g/kg) gave poor control of only 22% and is therefore classified as ‘insufficient’ weed control for Benghal wandering Jew. Only products containing mesotrione/S-metolachlor (83,3/416,7 g/l) and S-metolachlor (915 g/l) gave complete control of 100% (Graph 1). 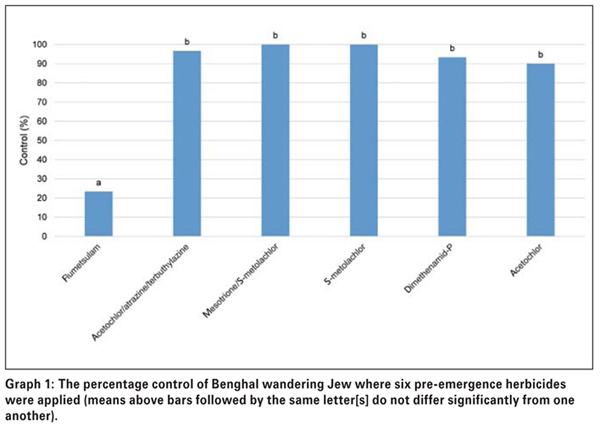 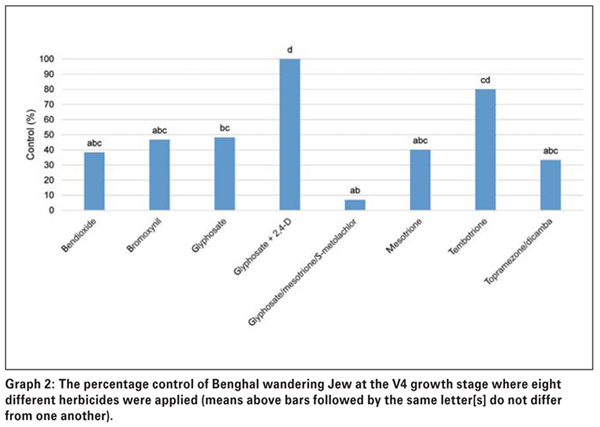 These herbicides gave control between 10% and 40%, indicating that they will insufficiently control Benghal wandering Jew at flowering stage. Application of glyphosate (540 g/l) alone gave 70% control and is classified as ‘reduced or suppressed’ control of Benghal wandering Jew. Only bromoxynil (225 g/l) and glyphosate (540 g/l) and 2,4-D (480 g/l) gave complete control of 100% when applied at the flowering stage (Graph 3).

Benghal wandering Jew can germinate and grow throughout the growing season of row crops indicating that the broad adaptability of this weed may require continuous management (Ferreira and Reinhardt, 1999), which include the use of effective residual herbicides such as 2,4-D. Producers usually wait too long before post-emergence herbicides are applied, illustrating the need of timely and most probably multiple post-emergence herbicide applications.

When high infestation levels of Benghal wandering Jew are experienced in fields, pre-emergence herbicides have to be applied at or before planting of row crops, but before weeds have emerged to reduce seed numbers in the soil. The most effective herbicide control strategies for Benghal wandering Jew should therefore involve combinations of both pre- and post-emergence herbicides applications (Prostko et al., 2005). Producers should be aware of herbicide selectivity and make sure that the herbicide(s) applied is registered to be used on the respective crop(s).

Although this weed is difficult to control, early identification followed by a proactive management strategy, can greatly reduce the impact of Benghal wandering Jew on crop yields, as well as reduce seed numbers in the soil.

For any further information or questions please contact dr Elbé Hugo at HugoE@arc.agric.za or 018 299 6298.