Some farmers realise from a very young age that they are destined for a career on the farm, while others first venture into other fields before eventually making their way back to the land. Itumeleng Naphtaly Mongane (59) is one of the latter. He first worked on the mines near Rustenburg before answering his calling to farm.

‘Farming is in my blood – I suppose I was born to farm as my father was also a farmer,’ he shares. In 1981 the labour on the farm became too much for his father Johannes and Itumeleng made the decision to exchange the security of a monthly income to take over the farming duties on the farm at Nooitgedacht in the Lichtenburg area.

Today he cannot see himself doing anything else. ‘Farming gives my life purpose,’ he says. Although Itumeleng does not have a son to follow in his agricultural footsteps, he is determined to get his two daughters involved. ‘Jobs are scarce, so they will just have to learn to farm and carry on what my father began.’

Helping a farming operation grow
Many years ago, Bophuthatswana’s then government allocated land to residents of the settlement of Nooitgedacht. Itumeleng now leases 180 ha of arable land from fellow residents of this settlement who do not own the equipment to cultivate their lands. By renting the land, he is not only helping himself, but at the same time providing an extra income for these households.

His father farmed with maize, sunflower and beans, but Itumeleng now focusses mainly on maize and sunflower. Due to a lack of funds, he only cultivated 110 ha this season. He would like to expand his farming operation, but says that without funding this remains a dream for now. Another problem which has had a negative impact on his farming enterprise is theft. ‘I now only have a handful of cattle left as they stole 14 of my livestock in January this year.’

Itumeleng is part of the Grain SA Farmer Development Programme and regularly attends the study group meetings. Here various topics such as soil acidity, food security, weed and pest control, soil conservation and plant nutrient requirements are discussed. ‘I enjoy attending the study groups because I learn a lot.’ Due to lockdown restrictions very few study group meetings could take place and Itumeleng says he really misses the interaction with other farmers.

Du Toit (Thabo) van der Westhuizen, development coordinator from the Grain SA Lichtenburg office in North West, has been mentoring Itumeleng for the past eight years. ‘Thabo is a great mentor. He has a beautiful heart and works very graciously with us. If I do not understand something completely, he will explain it again and again until I grasp it,’ says Itumeleng of his mentor. ‘He taught me how to cultivate the soil and plant properly to improve my yield.’

To improve his farming skills, he regularly attends courses offered by Grain SA. The courses which he has found to be especially helpful are about tractor and farm implement maintenance, as well as the various management courses which include farming for profit, resource assessment and farm planning, business ethics and farm management. These courses are designed to focus the attention of the farmer on matters beyond mere production – farming is a business and you should conduct your business according to good business management principles. 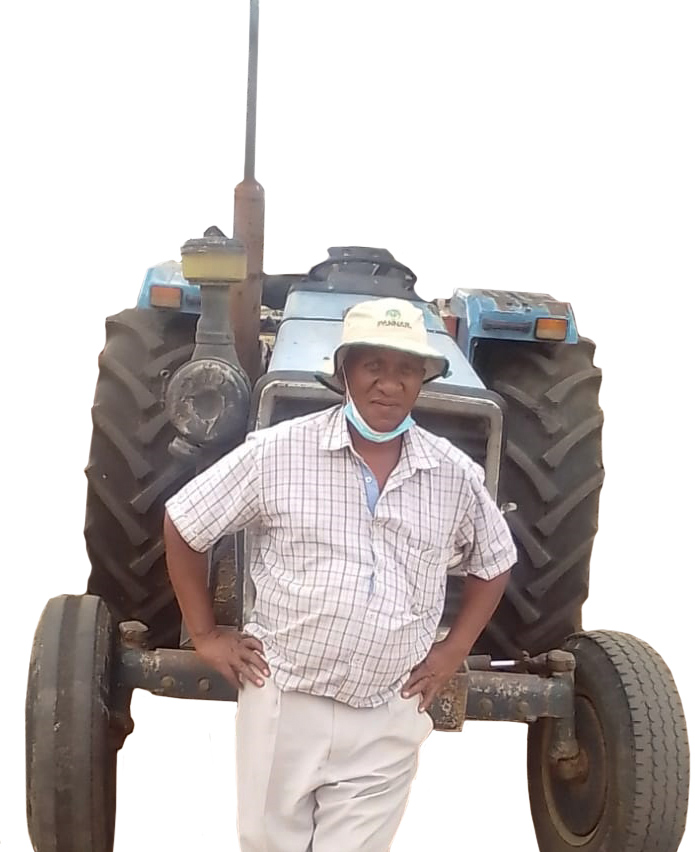 Making a difference is important
Itumeleng is very aware of the importance of food security and it is also the motivation behind his love of farming. ‘I love farming because I can help other people in this way by providing food on their tables. I farm to make food for people,’ he says about his passion. To him the excitement of seeing something grow from a seed to food will never disappear.

A lesson Itumeleng has learned over the years is that you cannot fulfil your calling in your comfort zone and the fact that farming differs from one season to the next, has not dampened his passion. Last year he had a good harvest, realising about 5,1 t/ha, but as the prices were not to his liking, his income was not what he had expected. ‘This year (last season) my yield was not as good, but the price of the maize was great.’ Itumeleng realised about 1,2 t/ha on sunflower and 3 t/ha with his maize. ‘A farmer must be ready for anything. You never know what will happen from one season to the next.’

This humble farmer owns three tractors and a planter. ‘Because I have my own implements, I can plant and plough when I am ready. Now I just need a bigger 100 kW tractor, then I can provide more food for even more people,’ he says.

The American comedian and media personality, Steve Harvey, said: ‘Your career is what you are paid for, your calling is what you are made for.’ It is clear that Itumeleng Mongane is living out his calling and trying to make a difference by contributing to South Africa’s food security.

Change your plan; not the goal